Please ensure Javascript is enabled for purposes of website accessibility
Log In Help Join The Motley Fool
Free Article Join Over 1 Million Premium Members And Get More In-Depth Stock Guidance and Research
By Rick Munarriz – Sep 23, 2021 at 11:55AM

The leading cruise line expects to have half of its fleet cruising by the end of next month. It reports third-quarter results on Friday morning.

Like someone entering chilly ocean waters, the cruise industry has been tiptoeing its way back into business. Thankfully for investors, the cadence of fleet resumptions is starting to pick up. Carnival (CCL) (CUK 0.23%) announced on Thursday that it expects to have 42 ships -- representing just over 50% of its total fleet capacity -- in operation with guests by the end of next month. Carnival also sees itself operating at nearly 65% of its fleet capacity by the end of the year.

It's been a rough surf for the industry. Carnival and smaller rivals Royal Caribbean (RCL 0.57%) and Norwegian Cruise Line Holdings (NCLH 0.67%) haven't been at full strength since suspending operations more than 18 months ago. Regulatory hurdles and travel restrictions have gotten in the way of the restart process, and even now it will be a challenge to fill the limited number of ships that are sailing until the COVID-19 crisis is no longer a threat to passenger and crew member safety. The resumption has been painfully slow, but at least we're seeing the players moving in the right direction. 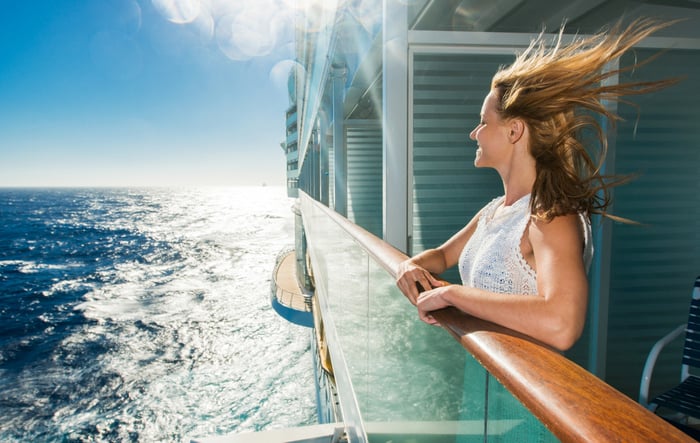 Being the largest player in this market isn't always an advantage. It pays to be nimble, as Disney (DIS -0.01%) expects to have all four of its cruise ships sailing again by October. Carnival operates nine different brands, and there are challenges to getting back up to speed in different markets with enough passenger reservations to make the process financially feasible.

Whenever it seems as if the coast is clear for Carnival and its peers to get back on track, there's a new hurdle. Last month the industry was thrown a curve when the Centers for Disease Control and Prevention updated its guidance, suggesting that even fully vaccinated potential passengers avoid cruises if they are older adults, immunocompromised, or obese. It was terrible timing for the refreshed guidance in the wake of the breakthrough COVID-19 cases, because ages skew older in the fall for the industry as younger families return to school and work.

We'll get a fresh snapshot of the industry on Friday morning when Carnival reports its fiscal third-quarter results. The year-over-year growth will be impressive, but that won't be a surprise since no one was cruising last summer. Investors will want to take a two-year approach to sizing up the recovery process, and that will prove disappointing.

Analysts see roughly $870 million in revenue for the three months ending in August, a whopping 85% decline from where Carnival landed two years ago during the seasonally potent fiscal third quarter. Carnival should post its seventh consecutive quarterly loss.

The look back won't be what moves the stock. We know Carnival and its peers had a cruel summer. The real driver for the shares on Friday will be how the industry bellwether sees its near-term prospects shaping up. How are future bookings holding up? How much are folks paying?

The industry has one tailwind. It has 18 months of cancelations on its books, and roughly half of those passengers have requested future cruise credit over refunds. Investors will also have to take Carnival's goal of having nearly two-thirds of its fleet sailing again by the end of next quarter with a grain of salt. We've seen starting lines -- and restarting lines -- get bumped over the past year and change. If we see cases start to spike or if COVID-19 outbreaks appear on the handful of ships already sailing, it could force the industry to push its potential recovery deeper into 2022. No one said that investing in cruise line stocks would be easy, but now it's Carnival's turn to see if it can inspire the market on Friday with its business update.

Should You Buy the Dip on Carnival Stock?
356%