The world-class stories and characters of Roald Dahl's books are now the exclusive property of the leading digital media company.

Video-streaming veteran Netflix (NFLX 3.14%) just announced a vital buyout. In most cases, I would be talking about how the company is buying a smaller rival, or picking up a promising company with exciting technology and services. But this is Netflix, and that company has different priorities. So, true to form, Netflix is spending big bucks on a portfolio of treasured content. Netflix is now the proud owner of the Roald Dahl Story Company and its plethora of world-class children's books.

What Netflix is buying

RDSC manages the production rights for British author Roald Dahl's books, and now Netflix will have the exclusive rights to develop films and TV shows in Dahl's fictional worlds. We're talking about household names such as Charlie and the Chocolate Factory, James and the Giant Peach, Matilda, and The BFG. Many of these titles have already been adapted for screens both small and large, but Netflix promises to put a fresh spin on these well-loved stories.

"As we bring these timeless tales to more audiences in new formats, we're committed to maintaining their unique spirit and their universal themes of surprise and kindness, while also sprinkling some fresh magic into the mix," the press release said.

This buyout builds on an existing partnership. Netflix is currently producing animated TV shows based on Matilda and Charlie and the Chocolate Factory. Developing these projects inspired Netflix to expand its Roald Dahl ambitions into a cohesive fictional world that could sprout ventures such as live theater, games, and consumer goods. The vision sounds a lot like Walt Disney (DIS 0.90%) picking up Marvel for a song and then constructing the multi-billion-dollar Marvel Cinematic Universe around that content creator's characters. However, the Dahl universe will have fewer superheroes and more magic, aimed at a slightly younger audience than Marvel's fandom. 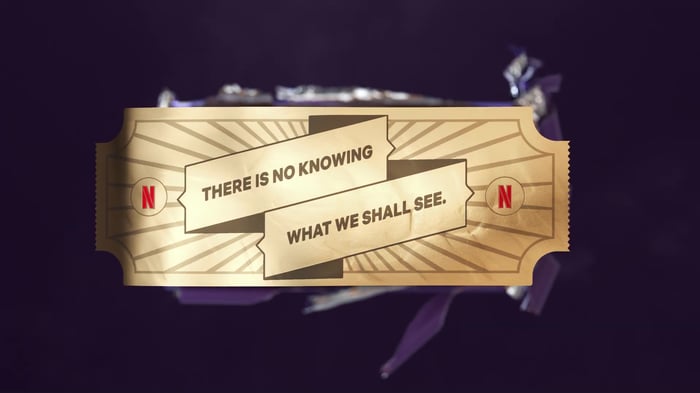 The RDSC library slides in between the kindergarten-friendly StoryBots asset and the more adult material from Millarworld. This wide-spectrum approach to content development makes perfect sense in light of Netflix's stated content strategy.

"People's tastes are very broad, even in a single market," says the company's long-term business view document. "The internet allows us to offer a wide variety, and to have our user interface quickly learn and make recommendations based upon individual users' tastes. Those members who love action blockbusters, Korean soaps, anime, sci-fi, Sundance films, zombie shows, or kids cartoons will find that Netflix fills their homepage with relevant and interesting titles."

That attitude applied to the ancient DVD-mailer service, where you could find pretty much anything commercially available on DVD or Blu-ray discs. It also applied to the early days of streaming, where Netflix signed licensing deals for the rights to stream a wide variety of other studios' productions. And it's as true as ever today, as Netflix is spending $17 billion on mostly original content in 2021. RDSC is a perfect fit for the strategy that brought Netflix this far in the streaming media market.

Netflix is sticking with a proven playbook

If you build a large number of high-quality story worlds, customers will come and watch them. Roald Dahl's works should provide plenty of fuel for the subscriber-grabbing fires that drive Netflix's entire business model. Like Millarworld and Storybots, it will take a few years to get a helpful feel for how these investments are shaping up, but this is Netflix's most promising content deal so far.

The RDSC buyout is not a game-changer in the short term but it's yet another baby step on the long road to building a global media empire. You don't change a winning team or throw out a high-performing playbook. You just keep adding superstars to the team, plugging holes in the company's market reach, and setting the stage for decades of content-powered success. Netflix is ripping entire chapters out of Disney's empire-building playbook, and the House of Mouse is a fantastic role model to follow.

This relentless focus on earning subscriber growth the hard way is why Netflix remains one of the best investments on the market today. The company is still in the early innings of its own long-term growth effort.