The Internet of Things, positioning technology, and a host of other exciting growth industries are driving these three companies' growth prospects.

Industrial software company PTC (PTC -0.80%), positioning technology company Trimble (TRMB -0.13%), and diversified industrial giant Honeywell International (HON 0.78%) significantly outperformed the S&P 500 over the last decade. I think they could do so over the following decades, too.

All three companies have a growth opportunity through increasing their revenue share from higher-margin software and recurring sources. Let's take a look at how that could create long-term value for their shareholders. 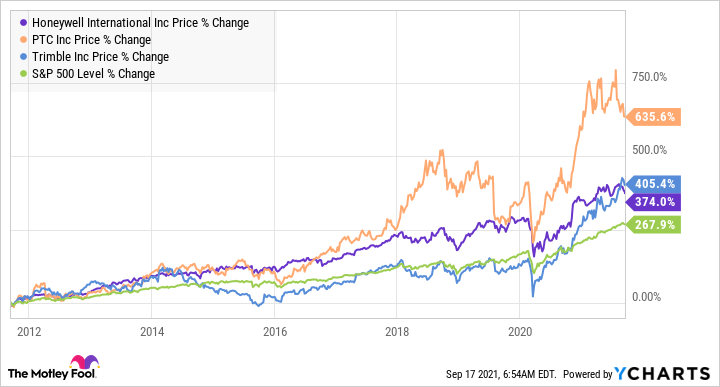 The case for PTC rests on the idea that the digital transformation of the industrial sector will continue apace over the next decade. Its core offerings include computer-aided design and product lifecycle management software, while its growth products include Internet of Things (IoT) and augmented reality (AR) software.

Demand for computer-aided design and product lifecycle management is being driven by their migration to the cloud as a software-as-a-service offering. Not only does the shift tend to increase long-term revenue, but it also makes it easier for users to collaborate work over the cloud with colleagues. 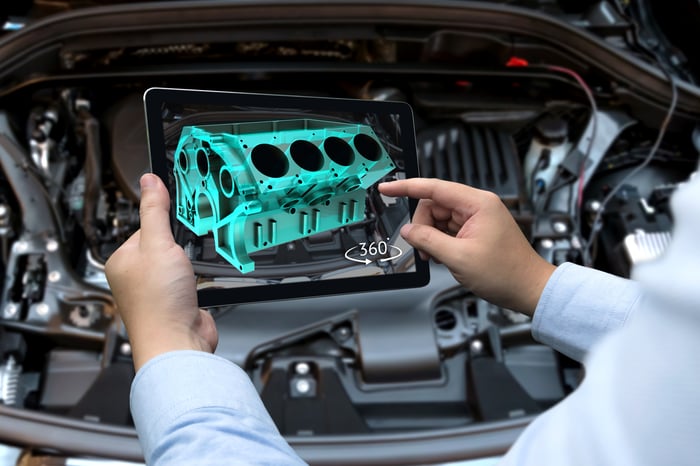 Alongside this, PTC's IoT and AR products have a long runway of growth ahead. For example, IoT software connects an owner's physical assets with the digital world, allowing owners to generate masses of data which is then digitally modeled and analyzed to improve the performance of the physical asset. An example might include modeling the functioning of a turbine so the manufacturers can improve performance and better predict when it needs to be serviced. Meanwhile, AR enables technicians to service equipment without even being physically present. For example, it can digitally assist a worker looking at wiring connections on bottling machinery in a plant.

Wall Street analysts have PTC growing revenue at a mid-teens percentage compound annual growth rate (CAGR) over the next few years, with operating profit growing at a 20% CAGR. Even though the last two earnings reports have been slightly disappointing, the stock remains on track with its long-term aspirations, and it looks attractive for long-term investors.

Positioning technology company Trimble sells hardware and software that helps users precisely position, monitor, and model their physical assets. For example, its traditional market is in the geospatial area (mapping), but it is also used to track trucking fleets, fix points in construction, or guide automated machinery.

The company has three key drivers to profitable growth in the future:

All three growth drivers are connected and also driven by the explosion in data analytics and digital technology. For example, data analytics generated by automated positioning technology will make it easier for a farmer to select a crop and then seed, water, and ultimately harvest it. As a result, the farmer will be more likely to invest in technology. 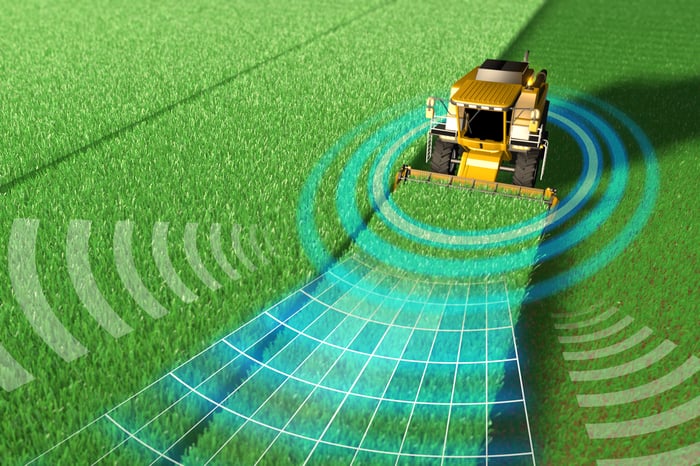 The move to more data analytics implies more software and recurring services revenue growth. As for becoming more part of an "integrated work process," investors can think of, say, how 99% of the top 200 trucking fleets use Trimble's technology. Real-time data is generated from the fleet and used to plan routes to maximize fleet productivity. As such, Trimble's solutions are increasingly becoming an integral part of the trucking company's workflow rather than an optional service.

Industrial giant Honeywell's stock has dipped recently, and that might be enough to tempt investors to initiate a position. The company's various businesses range from aerospace systems to building technologies, advanced materials, warehouse and process automation, and refining products.

There are three key reasons to believe the company can generate enduring wealth for investors:

By embedding software in its hardware, Honeywell can offer value-added services to a client -- something that could positively transform earnings and margin growth potential. For example, Honeywell invests in smart technologies that will enable owners to improve building efficiency in building technologies. 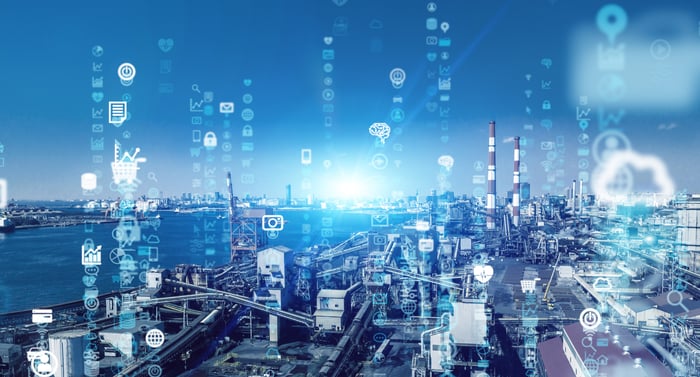 Meanwhile, an example of a so-called breakthrough technology investment comes from the company's combination with Cambridge Quantum Computing to create a stand-alone company. Honeywell will be the majority owner in the new company and invest $270 million to $300 million to drive its growth. Speaking on the last earnings call, CEO Darius Adamczyk said, "The combination is expected to significantly accelerate the path to commercial scale, creating the potential for approximately $1 billion in sales within two to five years."

With ongoing initiatives like this, Honeywell is very well set for long-term growth.