Goldman believes the stock can gain altitude from here.

Shares of Embraer (ERJ -1.47%) gained more than 10% on Thursday morning after the Brazilian aerospace manufacturer was upgraded to a buy at Goldman Sachs. Trends in aviation are moving Embraer's way, according to Goldman, which should have a positive impact on the share price.

It has been a difficult few years for Embraer, with the company hit both by the pandemic, which hurt demand for new aircraft, and by an April 2020 decision by Boeing to walk away from a $4 billion deal to acquire Embraer's commercial operations. Boeing's decision left Embraer without a partner to help market its aircraft globally, a huge setback in its battle against giants including Airbus. But Embraer in the quarters since has slowly regained its footing, and as vaccination rates have risen, demand for travel has returned and with it airlines' hunger for new aircraft. Embraer's portfolio, a combination of business jets and small regional-sized jets, is exactly what buyers are looking for.

Goldman's Noah Poponak in upgrading the shares Thursday morning noted Embraer's strong positioning in the market, saying he sees operational performance upside from here. While results still aren't where investors would like them to be, Poponak wrote that second-quarter margins and cash flow stats showed "meaningful improvement despite still-depressed volume."

Embraer has come a long way off of its lows, but still trades below its pre-pandemic price. The company has a strong product lineup that should be exactly what airlines are looking for as they seek to gradually scale up their domestic operations without adding too much additional capacity too fast. 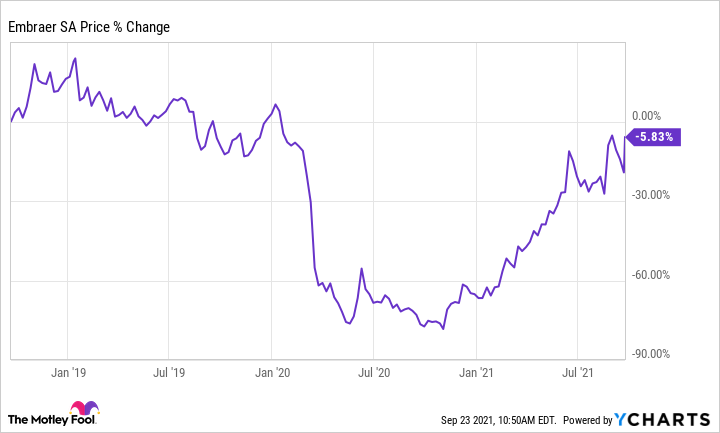 Poponak's rationale looks solid, and there is indeed likely upside from here. The issue is how long it will take to materialize, especially given the uncertainties about new COVID variants and ongoing issues in Embraer's home market, Brazil. But for those who can tolerate some amount of near-term turbulence, there is a lot to like about Embraer's long-term position.