U.S. Bancorp is building on its core strategy with one of its most significant acquisitions ever.

After BB&T and SunTrust merged to become Truist Financial in 2019, and then PNC Financial Services Group announced the acquisition of Banco Bilbao Vizcaya Argentaria's U.S. operations in 2020, it seemed like it was only a matter of time before close competitor U.S. Bancorp (USB 0.64%) made a move.

That came when U.S. Bancorp recently announced its intention to acquire the American banking arm of Mitsubishi UFJ Financial Group, which is referred to as Union Bank, in a part-cash, part-stock deal valued at roughly $8 billion. The deal continues the wave of consolidation in the banking sector, as banks of all sizes try to further scale in order to accelerate technology and digital banking initiatives, while making returns more attractive to investors.

U.S. Bancorp has historically been a very strong bank and a good, stable investment. Is the bank still a buy following this major acquisition?

On par with the bank's strategy

U.S. Bancorp will acquire Union Bank in a largely cash deal that also gives 44 million shares to MUFG shareholders. The bank will grow from $559 billion to $664 billion in total assets with the purchase, cementing its status as America's fifth-largest bank.

The $8 billion price tag values Union at 130% tangible book value (or TBV; it represents what the company would be worth if it were liquidated). The price will dilute U.S. Bancorp's TBV per share by roughly 1%, which will take less than a year to earn back. U.S. Bancorp intends to cut about $900 million, or 40%, of Union Bank's non-interest expenses. Once that's done, management expects the acquisition to boost earnings by 8% in 2023. 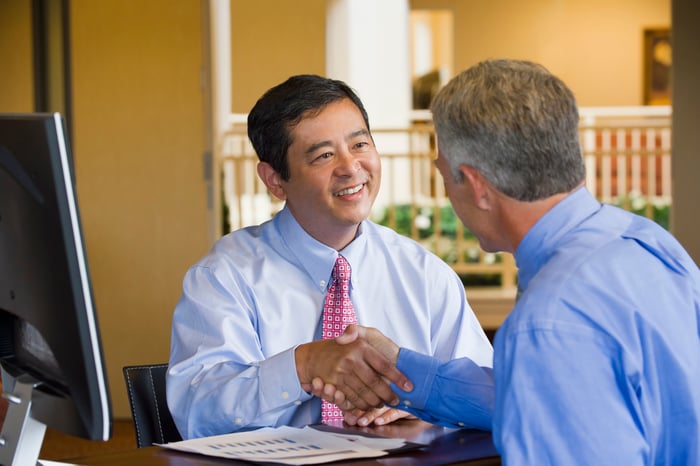 While the financials look decent, I'm more excited that the deal seems to fall in line with and build upon U.S. Bancorp's core strategy. What sets U.S. Bancorp apart from its peers, aside from its strong banking fundamentals, is its unique payments business, which includes retail payments solutions, global merchant acquiring, and corporate payment systems. The acquisition of Union Bank comes with 1 million consumer accounts, which U.S. Bancorp can service with its traditional banking products and wealth management, as well as more specialty payment products like credit and prepaid cards.

Lastly, the acquisition gives U.S. Bancorp added scale in California, a market the bank really likes because of its growing and affluent consumer population, and the fact that it has more small businesses than any state in the country.

Like most U.S. subsidiaries being sold by their foreign parents, Union Bank seemed to be headed in the wrong direction. Just before U.S. Bancorp announced its acquisition, the Office of the Comptroller of the Currency slapped Union with a cease-and-desist order for "the bank's unsafe or unsound practices regarding technology and operational risk management." The order requires the bank to improve deficiencies with technology and operational risk governance, among other internal controls.

That's obviously not good, but U.S. Bancorp said that it "evaluated and incorporated these regulatory concerns into all aspects of the deal process, including due diligence, integration planning and valuation." Valuation is the key word here. Remember that U.S. Bancorp only paid a price that valued Union at 130% TBV, which is a pretty low valuation.

And U.S. Bancorp does seem to have a fairly easy solution for the regulatory issues. The OCC, in its order, essentially said Union has bad technology and bad risk management protocols governing that technology. U.S. Bancorp's solution is to essentially abandon all of Union's current systems and bring Union entirely onto its own systems and platforms. On the conference call, U.S. Bancorp CFO Terrance Dolan said:

They have probably over 100 different applications and systems that we know will be subject to the integration. And at this particular point in time, we do not anticipate retaining any of those. If you think about the business that they're in, the products that they offer and all those different types of things, they're pretty much very traditional.

It's hard to know exactly how the cease-and-desist order will play out, but seeing as U.S. Bancorp is a very strong bank that has invested a ton in its technology in recent years, I feel somewhat confident that simply bringing all of Union's systems and applications onto its own tech platforms will probably clear up a lot of issues. And if that's the case, then the regulatory issues with Union may have enabled U.S. Bancorp to acquire the subsidiary at a better valuation than it could have.

I've long said U.S. Bancorp is a good investment. While the bank doesn't trade cheap -- at recent prices, it's around 235% of TBV -- I think its premium is well-supported. The unique payments business the bank is growing could lead to an even higher valuation once its full potential is realized. Additionally, U.S. Bancorp hasn't done a large acquisition like this in quite some time, so I'm sure management put a lot of thought into it. Union significantly increases the bank's scale while staying on par with U.S. Bancorp's overall strategy.