The company just entered the public markets through a SPAC, and is going after a gigantic market opportunity.

Stocks in the financial technology (fintech) sector have been great performers over the past five years. Square is up more than 2,100%, PayPal has gained almost 600%, and Visa is up nearly 170% in the last five years, with all three beating the returns of the broad S&P 500 index. Clearly there are some great opportunities within the fintech sector for investors to take advantage of.

One new fintech stock to enter the public markets is SoFi Technologies (SOFI -4.64%), which officially started trading this year. Is SoFi the next fintech disruptor set to crush the market? 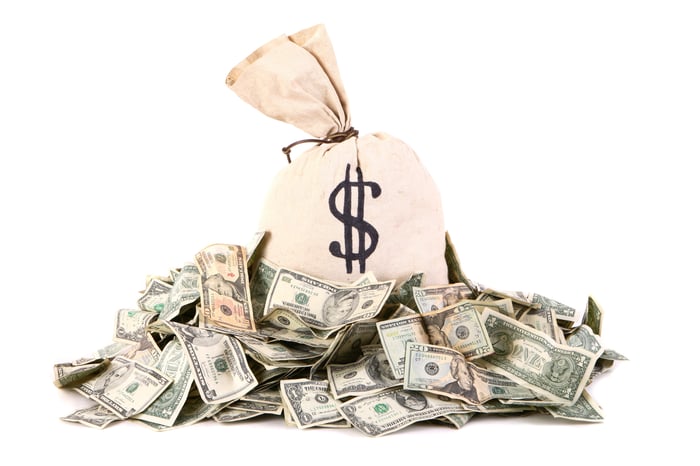 SoFi started out a decade ago as a way for people to refinance student loans. It's still in that business, but since then it has expanded its lending offerings to mortgages, consumer loans, and credit cards. Over the last few years, it has expanded into financial services with SoFi Money (a cash account similar to a bank) and SoFi Invest. Its goal is to make the SoFi mobile application a one-stop shop for personal finance needs. The most similar app to SoFi is Square's Cash App, which has payments, deposits, investing, cryptocurrencies, and debit cards. The SoFi app is trying to solve something similar but aims to take its product a step further.

To do this, it is trying to get approved to operate as an official bank under the Federal Reserve System. To speed up that process, it bought a small bank called Golden Pacific Bank to get a bank charter. It is still waiting for regulatory approval to fully start its banking business, but if and when it gets approved, SoFi will have much more flexibility in using customer deposits to finance loans. This will help its lending and financial services segments work in tandem.

Lastly, SoFi owns a technology platform called Galileo that it bought in 2020 for $1.2 billion. Galileo provides application programming interfaces (APIs) and software services to help other companies build digital banking products, easily issue credit cards, and process payments. SoFi's other business units were already customers of Galileo's, and SoFi's management plans to supercharge the company and expand it internationally over the next few years.

The two most promising parts of SoFi's business right now are financial services and Galileo, mainly because of how fast these segments are growing.

In Q2 of this year, SoFi had 2.6 million financial products being used, up 243% from the same period in 2020 and up from a measly 107,000 in Q1 of 2019. Clearly SoFi has found a product-market fit for its financial services products, including investing, cash management, and cryptocurrencies. Financial services revenue hit $17 million last quarter, up significantly from the $2.4 million in revenue it did in Q2 of last year. With $799 million in revenue over the last 12 months, financial services are a small part of SoFi's business right now -- but could become an even bigger driver of growth over time.

Galileo, the technology platform discussed above, is another highlight of SoFi's business at the moment. The platform now powers 79 million accounts around the globe, up 119% year-over-year in Q2. The segment has seen 100% year-over-year account growth each of the last four quarters, which is a great sign for how SoFi has been able to integrate the recent acquisition. Galileo is a lot larger than financial services, doing $167 million in revenue over the last 12 months and $69 million in contribution profit. For a segment growing users 100% year-over-year, a 41% contribution margin is quite strong. If Galileo can keep up these impressive growth numbers, SoFi's $1.2 billion acquisition price will look like a steal a few years from now because of all the profits Galileo will bring in for the business.

Can SoFi justify its rich valuation?

SoFi's market cap was $13.7 billion at Thursday's market close, giving it a price-to-sales ratio (P/S) of 17. Its legacy business, lending, is only growing 14% year over year, which is a bit of a concern for anyone thinking of this as a high-growth investment. However, it looks like this slack will get picked up by the financial services and Galileo segments, since SoFi is guiding for 58% adjusted net revenue (which excludes mark-to-market changes on lending products) this year. And with only 2.56 million members at the end of Q2, it looks like SoFi has a long runway to grow if it can achieve national relevance with its application and broad portfolio of services. So even at this market cap, SoFi could turn into a great investment if it can become a digital financial hub for tens of millions of people around the globe.

The problem is that right now it looks like Square (with Cash App) and PayPal (with its flagship app and Venmo) are eating SoFi's lunch. Those three apps consistently rank one, two, and three in the finance category on Google's and Apple's mobile app stores, while SoFi ranks outside the top 50. Even as fast as SoFi is growing, it is still well behind the big dogs of personal finance right now and has a lot of work left in front of it. For example, Square's Cash App, which offers a lot of similar financial products, like debit cards, investing, and personal loans, grew monthly active users (MAUs) by 10 million over the past 12 months to 40 million, while SoFi has only had 2.56 million people engage with one of its products in its entire company history.  If SoFi can achieve meaningful growth and climb up the app charts, that could be evidence that users view it as a complementary service to Square and PayPal, or that it is making headway against these competitors.

Even though management tells a great story and has a strong product roadmap, I don't believe SoFi Technologies is the next great fintech stock unless it can get close to the usage and download levels of Square and PayPal. That could certainly happen if people get behind SoFi's comprehensive product offering, but right now it looks like it is lagging behind other personal finance apps with product adoption, indicating that the majority of consumers are sticking with the more established fintech apps (Cash App, Venmo, and PayPal) for their personal finance needs at the moment.

SoFi Is Becoming a Bit of a Regulatory Headache
366%