It could reshape the world.

If you were asked to list some of the biggest trends that you expect will impact stocks over the next several decades, which ones would leap to mind? You might think of aging populations, or the increasing adoption of artificial intelligence. You might point to climate change, digital payments, or e-commerce.

However, there's another enormously important ongoing trend that arguably could reshape the global economy (and therefore affect stocks) in a bigger way than any of those. And it's one that many investors are completely ignoring. 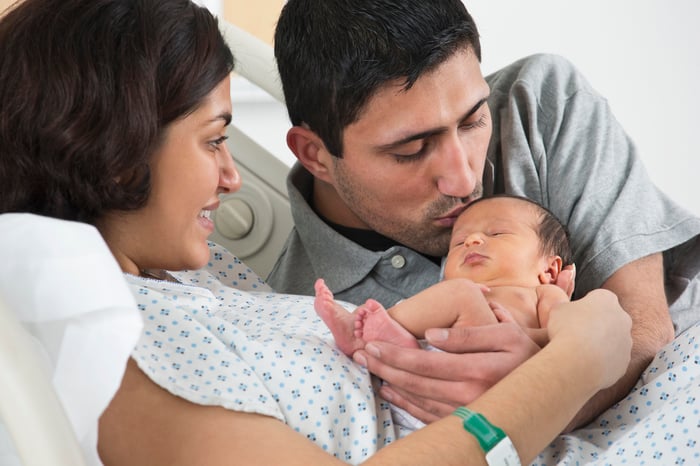 A dearth of births

The Centers for Disease Control and Prevention (CDC) reported earlier this year that the U.S. fertility rate (the number of births per 1,000 women over their lifetimes) reached a record low in 2020. This continued a pattern of declines that has been in effect for years.

This shift is not just an issue domestically. Fertility rates have also been consistently declining across the world. Today, nearly half of the people in the world live in countries where the fertility rate is less than the replacement rate.

The slide has been especially pronounced in higher-income countries, including most of Europe. However, fertility rates have fallen in middle-income and lower-income countries as well. Overall, the global population is continuing to grow, but at a slower rate than at any time since 1950.

Implications of the baby bust

One positive consequence of declining fertility rates is that environmental damage associated with rapidly growing populations could be stemmed. Also, falling fertility rates correlate with rising income levels. Fewer births in countries in Asia and Latin America over the coming decades, for example, will likely reflect growing middle classes with improved standards of living in those nations.

On the other hand, when a country's population isn't having enough children to meet the replacement rate, that eventually leads to a shrinking workforce. This could especially be problematic in countries where aging populations are translating into rapidly rising numbers of senior citizens -- including the U.S., Japan, and much of Europe.

These effects could create significant challenges for governments. They could limit economic expansion. But the big problems can also present big opportunities.

Technology is likely to be a significant part of the answer to a shrinking labor force. AI systems and robots could be tasked with performing many jobs that humans do today. Expanding middle classes in developing nations would result in larger markets for goods and services. And the combination of fewer young people and more elderly ones could make innovative healthcare solutions more important than ever.

Where there are challenges, there are opportunities for investors. In my view, a few companies stand out as particularly smart bets to profit from the long-term trend of declining fertility rates.

Increased demand for AI technology will likely provide a significant catalyst to Nvidia (NVDA 0.14%). The company's graphics processing units (GPUs) are already popular for powering AI applications in data centers. Nvidia has also developed a platform that serves as the brains for self-driving vehicles.

One international stock could be an especially big winner from an expanding middle class in Latin America. MercadoLibre (MELI -0.59%) ranks as the leader in e-commerce and online payments in the region. The company also provides logistics services throughout Latin America.

Teladoc Health (TDOC -2.05%) should enjoy robust growth with the changing population dynamics over the next few decades. The company is the largest virtual care provider, and its telehealth and chronic disease management platforms could be critical in increasing the productivity of a declining number of healthcare professionals.

But what if fertility rates rebound? The good news for shareholders in each of these companies is that under that circumstance, they should prosper anyway.

Nvidia is already a top growth stock to buy with tremendous prospects in gaming and AI. MercadoLibre is only scratching the surface of its e-commerce opportunity in Latin America. It's a similar story for Teladoc with the global virtual care market.

All three of these companies would likely benefit from a continuation of the trend of declining fertility rates. However, Nvidia, MercadoLibre, and Teladoc also stand to win due to other long-term trends that investors aren't ignoring.