Please ensure Javascript is enabled for purposes of website accessibility
Log In Help Join The Motley Fool
Free Article Join Over 1 Million Premium Members And Get More In-Depth Stock Guidance and Research
By Rick Munarriz – Sep 27, 2021 at 11:58AM

The resort turns 50 on Friday. Shareholders will be the ones blowing out the candles on this cake.

There's a lot going on at Walt Disney's (DIS -1.04%) theme park resort in Florida this week. Disney World officially turns 50 on Friday, kicking off 18 months of new rides, attractions, and themed merchandise that should keep the turnstiles clicking and the registers ringing.

The media giant surprised investors when its theme parks segment returned to profitability in its latest quarter, earlier than expected. Now it's time to see if the theme parks can return to pre-pandemic revenue levels. It's a feat that might be easier than you think. Disney has set itself up to increase revenue per capita to the point where it can still make more money with fewer guests than before.

Prioritizing higher-paying guests with a tiered park reservations system, boosting admission prices for day guests as well as annual passes, and the rollout of premium-priced access to expedited queues are largely unpopular moves for Disney World fans. But they are also the reasons Disney will not only survive but thrive through the next 18 months. 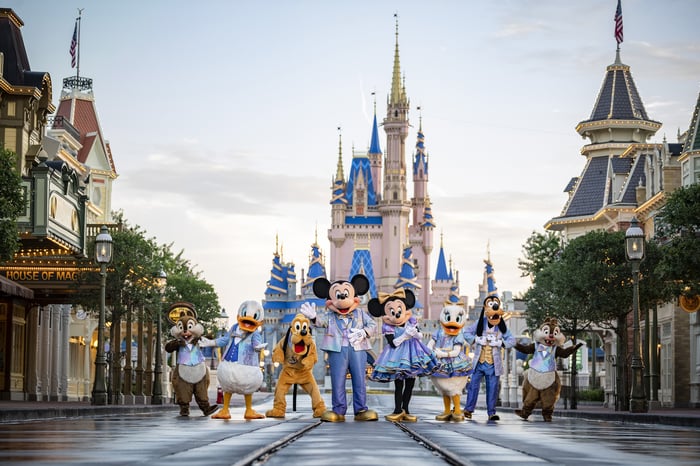 Everything is coming together

The hardest ride to get on in all of Disney World has been Star Wars: Rise of the Resistance. Since its debut at Disney's Hollywood Studios in late 2019, folks have had to secure a boarding group through the My Disney Experience app. Until Thursday of last week, they had to be on their phones by 7 a.m. to grab a virtual boarding group from a supply that typically ran out within a couple of seconds. Another equally brief window would open at 1 p.m. for folks already in the park.

With the high-tech ride failing often throughout most operating days and visitors making the Star Wars-themed trackless dark ride a priority, it was a supply-and-demand conundrum for the House of Mouse. With the ride more stable (and with crowds light during the seasonally sleepy month of September), the boarding process changed on Thursday of last week. Disney World did away with the virtual queue. Folks could now line up for the ride just like they do for the rest of the resort's dozens of attractions.

The transition was refreshingly smooth. There were some early reports of waits as long as three hours, but most of the time, the posted wait times were within an hour or two, more than reasonable for the critically bar-raising attraction.

Opening up walk-up access is important. Guests wanting to go on the ride no longer need to abandon that notion if they plan on arriving to Disney's Hollywood Studios later in the day. From a financial perspective, the transition now opens the door for Disney World to start charging for access to the new Lightning Lane+ queue that will get park guests on even faster. Disney will soon roll out the lucrative (but controversial) premium pricing for expedited lines like most of its smaller rivals have been doing for years. With wait times for Star Wars: Rise of the Resistance and other marquee rides expected to skyrocket this weekend (and continue to be lengthy through most of the next 18 months), there's a lot of money to be made by giving visitors a way to pay for less time waiting and more time elsewhere.

Another profitable and less controversial recent development working in Disney World's favor is that international travel restrictions will be easing for European visitors in November. Disney's domestic theme parks have had to serve largely stateside patrons since reopening. Now the door is finally starting to crack open for lucrative foreign tourists to return to the parks -- just in time to take part in the revelry that comes with the golden anniversary.

On Friday, all eyes will be on the Magic Kingdom theme park, where it all began 50 years ago. The resort's Epcot park will also draw crowds as the new Remy's Ratatouille Adventure ride opens on Friday. Both parks will also debut new nighttime shows, and both will get new roller coasters at some point during the 18-month fete.

Disney World's two other theme parks won't be getting the same kind of attention as the resort's two original parks, but they will be tourist magnets for folks spending a week or more at the resort. The arrival of Lightning Lane+ will also make the resort's two most popular attractions -- Star Wars: Rise of the Resistance at Disney's Hollywood Studios and Avatar: Flight of Passage at Disney's Animal Kingdom -- more accessible for folks willing to trade money for time.

It will all add up to big business for Disney's theme parks segment. Even regulars who don't typically buy trinkets might find it hard to resist snapping up commemorative merch themed to the big milestone. Less-frequent visitors who have been putting off a trip to Disney World will have little excuse to not visit now if they can afford the heightened pricing. It's a golden anniversary for Disney, but also a golden opportunity for the mother of all travel and tourism stocks.