Analysts are looking at several growth drivers for Teladoc over the next year.

From sizzle to fizzle. That's been the story for Teladoc Health (TDOC 0.69%) stock. Shares of the virtual care leader skyrocketed 139% in 2020, fueled by COVID-19 lockdowns. It's been a much different story in 2021, though, with the stock down 30% year to date.

Can Teladoc rebound? Several analysts believe that it's not only possible but probable. Here's why Wall Street thinks Teladoc stock could soar 44% higher within the next year. 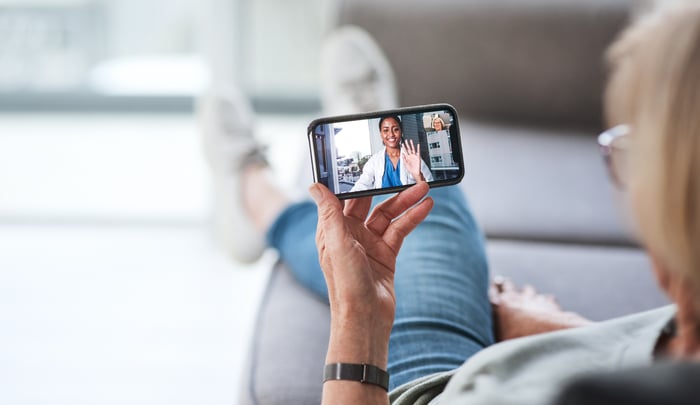 To be sure, several analysts expect that Teladoc Health will continue to face some headwinds this year. Growth rates are likely to continue slowing compared to the booming results reported in 2020. However, there are several near-term growth drivers that make some on Wall Street more bullish about Teladoc heading into 2022.

Teladoc recently signed a major agreement with Health Care Service Corporation (HCSC), the fifth-largest health insurer in the U.S., to provide chronic care solutions to HCSC members. CEO Jason Gorevic called this a "landmark deal" for Teladoc that will fuel growth over the next three years.

The company's Primary360 platform for virtual primary care also is picking up momentum. Teladoc expects to bring on multiple Fortune 1000 employers with the product in the second half of 2021. Gorevic said in the company's second-quarter conference call that Teladoc is in "very, very late-stage discussions with several other large players."

Teladoc recently launched another new product, myStrength Complete, that should drive growth as well. MyStrengthComplete combines Teladoc's therapist and psychiatric teams with the digital mental health functionality gained with the acquisition of Livongo's technology platform. Teladoc has already signed up several large employers for the product and has a robust pipeline that includes employers and health plans.

The company also has solid near-term growth prospects in international markets. Teladoc signed an agreement in Q2 with giant Latin American telecom company Telefonica. This deal expands the partnership between the companies to make Teladoc's telehealth capabilities available to over 60 million people in Brazil.

Many Wall Street analysts tend to focus more heavily on near-term prospects for stocks. However, Teladoc's long-term opportunities are what excite some investors. That list notably includes Cathie Wood, who has continued to scoop up shares of the virtual care stock for her ARK Innovation ETF.

Teladoc has plenty of room to grow within its current client base. Earlier this year, the company reported that there were nearly as many potential users of its virtual care services at current clients as there were members.

The acquisition of Livongo in 2020 also provides significant cross-selling opportunities for Teladoc. The company's sales pipeline has been bolstered by having more products to market to existing clients.

Analysts have also undoubtedly checked out an analysis of the virtual care market completed by McKinsey & Company last year. The global consulting firm estimated that virtual care in the U.S. alone could grow into a $250 billion market after the pandemic ends.

Wall Street analysts set price targets based on how they think a stock will perform over the next 12 months. They look at the companies' internal projections, overall economic conditions, and crunch their own numbers to come up with these targets.

Ultimately, though, analysts' price targets are merely guesses. A job with a high-profile Wall Street investment firm doesn't give a person a view into what the future actually holds.

The truth is that there's no way to know if Teladoc's share price will rise by 44% within the next year as analysts anticipate. However, the fundamentals appear to be in place for this healthcare stock to be a big winner for investors over the long run.