There will soon be more options in the frozen food aisle.

The pandemic was a doubled-edged sword for fake-meat manufacturer Beyond Meat (BYND -2.40%). While sales at retail sales soared as consumers stocked up on groceries, sales from the foodservice industry fell off a cliff.

The situation now seems to be reversed. Restaurant sales are recovering, although a recent report from Bloomberg suggests that fast food chains are pulling back on the whole idea of fake meat. Meanwhile, sales at retail outlets are tumbling. Beyond Meat reported a 14.3% drop in U.S. retail sales for the second quarter.

It's a tough comparison for sure, given the surge in grocery buying at this time last year. But real meat companies aren't seeing the same thing. Tyson Foods, for example, reported a double-digit rise in sales for the same period. 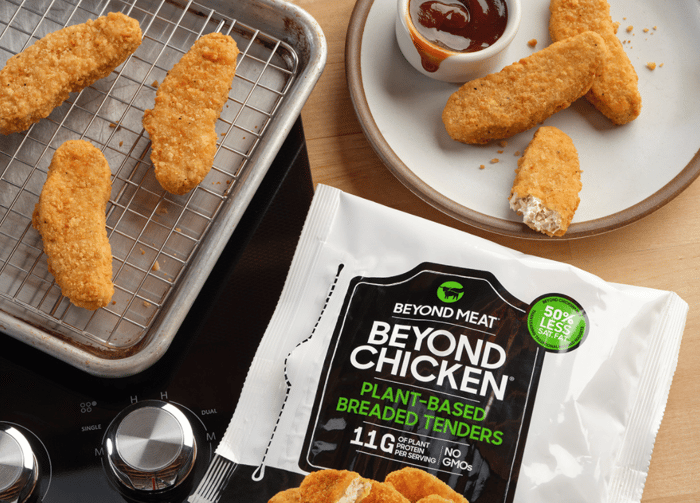 Beyond Meat is best known for its plant-based ground "beef" products, but the company has been working on faux chicken as well. Beyond Meat debuted its Beyond Chicken Tenders at around 400 U.S. restaurants in July, and now it's rolling out that product to grocery stores.

Unlike the pea protein-based Beyond Burger, Beyond Meat's tenders use fava bean protein along with a couple of dozen other ingredients to mimic the taste and texture of real chicken. This differs from chicken products from competitor Impossible Foods, which use soy protein.

Beyond Meat's tenders will be available in major stores starting in October. Walmart, Jewel-Osco, NorCal, Harris Teeter, Giant Foods, and ShopRite are on board for the launch, and Beyond Meat expects to add more stores as the year goes on.

One problem Beyond Meat and all fake-meat companies have had is pricing. Commodity meat sold at grocery stores is ultimately priced based on supply and demand. When you're selling an alternative to ground beef that's three times as expensive, it's a tough sell for a lot of people.

Beyond Meat's pricing on its chicken tenders won't be quite as outrageous compared to the real thing, partly because consumers are willing to pay up for convenience. But pricing will still be a headwind. Beyond Meat expects 8-ounce packages of its tenders to go for $4.99, or nearly $10 per pound. For comparison, a bag of Tyson chicken tenders on Walmart.com is about half the cost by weight.

Will people pay double for tenders made from fava beans? Will parents who rely on easy foods like chicken tenders opt for a far pricier alternative? Plenty of people will try Beyond Meat's tenders because they're new. The big question is now many people will routinely buy them once the novelty has faded.

Beyond Meat stock is struggling

Shares of Beyond Meat surged in the early days of the pandemic, but it's been a roller coaster ride for investors since then. The stock now sits a bit above its 52-week low, down nearly 50% from its 52-week high.

One problem is certainly valuation. Beyond Meat is valued at around $7 billion, which works out to 13 times the average analyst estimate for 2021 sales. For a company that's largely competing with commodity products, that seems pricey to me.

It would perhaps be a different story if sales at grocery stores were holding up, but they're not. Beyond Meat sold $77.2 million of products to U.S. retail outlets in the second quarter, down from $90 million during the same period last year. International sales are growing swiftly, but that's largely due to increased distribution overseas. Even with U.S. foodservice sales recovering, overall sales in the U.S. were up less than 5% year over year.

Is it worth paying a hefty premium for one of many fake-meat producers running up against weakening demand in grocery stores? Not in my opinion.

These 3 Growth Stocks Are at Historic Lows, But Could Be About to Rally
371%