UiPath is near its 52-week low, presenting an opportunity to long-term investors.

Like Coinbase, Riskified, or many hot 2021 IPOs, UiPath (PATH 0.36%) has fallen from grace since its initial public offering in April. After raising $700 million, the company has done nothing but execute, posting stellar financials and growth in the last quarter. Yet the hype and interest in the company have fallen, sending shares into a downward spiral.

Now UiPath is down nearly 40% from its all-time highs. Here's why the company remains at the top of my watch list, despite the stock's poor performance since UiPath went public. 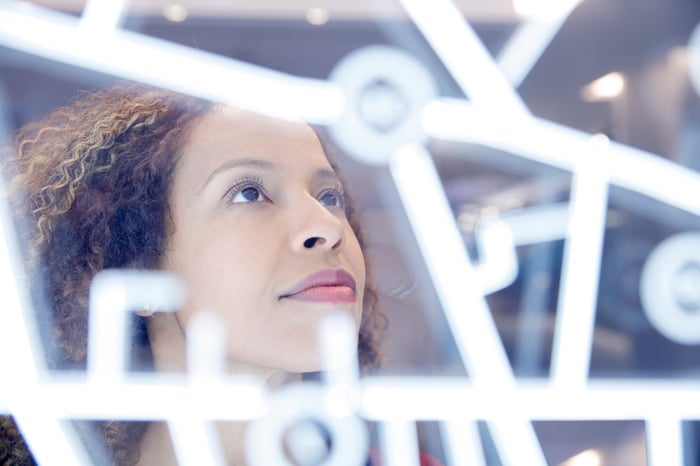 Why it has fallen

When UiPath stock first hit its all-time high in late May, the automation company had become one of the hottest new IPOs to hit the markets in 2021, reaching a market capitalization of nearly $45 billion. For many investors, that was too high of a price to pay for the company, and they sent shares down.

Shares continued spiraling until the company's first-quarter 2022 earnings, in which it reported strong growth and high guidance. But results weren't enough for the stock's high valuation, which was 53 times trailing-12-month sales at the time. Shares fell 7% after earnings and continued to tumble until late September when they bottomed out near $51.

Why it could rise from the ashes

UiPath is on a mission to "make software robots so people don't have to be robots." Its software bots -- called robotic process automation or RPA -- can accomplish automated repetitive tasks, freeing people up to do other work. These bots are not capable of everything, but UiPath believes RPA can help companies become more efficient by automating repetitive compliance, onboarding, or validation tasks. The company expects that its market opportunity will grow extremely fast, with its total addressable market reaching $60 billion by 2024.

UiPath has landed some large customers, including 80% of the Fortune 10 and 63% of the Fortune Global 500 -- Chipotle Mexican Grill and Crowdstrike being just a few. The company drastically beat its own expectations for its second-quarter earnings, reaching a revenue of $195.5 million and annual recurring revenue (ARR) of $726.5 million, above its own guidance of $180 million to $185 million in revenue and $702 million to $704 million in ARR. The company then raised its full-year outlook from $850 million to $855 million in ARR to between $876 million and $881 million.

Is it worth buying today?

While it's not trading at the valuation it did in June, UiPath is still expensive, trading at 38 times sales. Competition in the industry is growing rapidly, and while Gartner named UiPath as the market leader for RPA software, many competitors like Automation Anywhere and Microsoft are hot on its heels.

To try to stay on top of the competition, UiPath has been funneling plenty of money into research and development. So far this year, it has spent $151 million on R&D, nearly tripling from the first six months of 2020. The company had a negative cash flow of $3.5 million in the second quarter and reported a net loss of $100 million, so it's by no means profitable, and it might not get there for a few years. It does have nearly $1.9 billion in cash on the balance sheet with no debt, which can keep it afloat and enable the business to invest in its own growth.

UiPath is in an industry that is projected to grow at 16% annually or more. That stat alone suggests that this company has a bright future ahead. If, that is, it can remain the market leader by growing sales -- which is what investors should monitor. Keeping competition out of the market will also be important, as will shifting to achieve profitability in the future. But if it can keep growing its ARR at an 86% compound annual rate, which it has since the beginning of its 2020 fiscal year (the calendar year 2019), the company could prove a successful long-term pick.

UiPath Is Decreasing Losses on the Bottom Line: Does That Make UiPath Stock a Buy?

Is UiPath Still a Good Stock to Buy?