Investors in the Nasdaq Composite (^IXIC 0.01%) had to deal with an unusual situation on Tuesday. After a year and a half of strong outperformance, investors appear to be pushing the index out of favor, at least in the short run. As of 12:15 p.m. EDT, the Nasdaq was down almost 2.5%, falling more steeply than the rest of the stock market. Fears about the prospects for growth-oriented stocks dominated the investing landscape on Wall Street.

However, a couple of Nasdaq stocks not only bucked the downtrend but produced substantial gains. Gogo (GOGO 1.58%) has been an off-again, on-again favorite among investors for quite a while, and it finally sees better times ahead. Meanwhile, in the marijuana stock realm, Aurora Cannabis (ACB 1.97%) has been down and out, but its latest earnings report suggested better times could be around the corner. Below, we'll look at both stocks more closely.

Shares of Gogo soared almost 24% at midday on Tuesday. The provider of in-flight internet services provided a long-term outlook that has investors feeling better about the company after some turbulence in recent years. 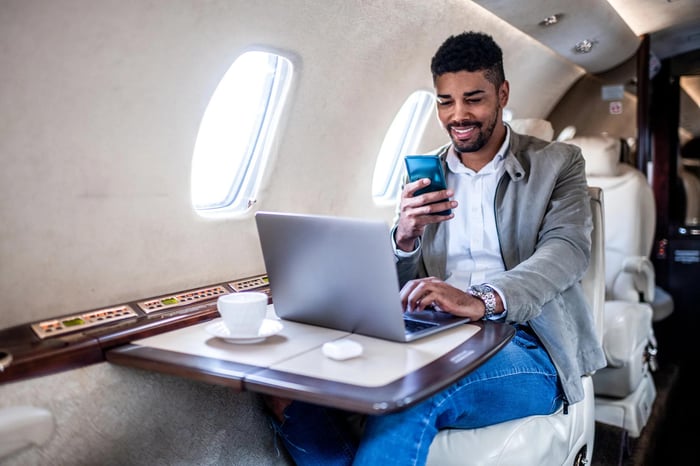 In particular, Gogo updated several of its long-term financial targets in favorable ways. It boosted its estimate for average annual revenue growth between 2020 and 2025 to 15%, up from 10% previously. It sees its adjusted pre-tax operating margin rising to 45% by 2025, compared to its previous target of 35% to 40%. And Gogo sees free cash flow of $125 million in 2023 and $200 million by 2025, compared to previous 2023 projections for $100 million in free cash flow and "significant" growth thereafter.

Gogo's pivot to serve the private aviation community has paid off. With the COVID-19 pandemic continuing to discourage passengers from flying on commercial carriers, private air travel activity levels have moved into the stratosphere. That provides a fertile market opportunity for Gogo, especially given that business travelers are far less price sensitive than their counterparts on commercial airliners.

Gogo has shown promise in the past, but its previous gains have often proven short-lived. Shareholders are hopeful that this time is different, but conservative investors should consider waiting to see if those long-term projections start to pan out before jumping too far into the stock.

Meanwhile, shares of Aurora Cannabis were up nearly 8%. The marijuana stock reported fiscal fourth-quarter results that made investors feel more comfortable about the company's prospects .

Aurora's financials didn't look all that great. Net cannabis revenue of $54.8 million was down from three months ago and 20% lower than in the year-ago period. Plunging consumer sales offset gains in the medical cannabis segment. Despite a significant rise in average selling prices, volumes plunged to wipe out much of those gains. Adjusted pre-tax operating losses narrowed from year-ago levels but remained significant.

Yet the stock analyst community seemed to like what Aurora has done thus far to try to stem the bleeding. MKM Partners upgraded Aurora from sell to neutral, although its price target on the stock remained below current levels. Cowen kept the stock at market perform and didn't change its price target, which is also below the price right now. Cost-saving measures could help Aurora improve its prospects for profitability.

The pandemic has been tough for the Canadian cannabis industry, but investors seem to hope that the worst of it is behind us. Yet despite today's share-price gains, it's far from clear whether Aurora will be any better an investment going forward than it has in the past.

Why InterMune, Senomyx, and Gogo Are Today's 3 Best Stocks