It looks like Captain Kirk is going to space for real -- but not on a Virgin Galactic craft.

Shares of Virgin Galactic (SPCE -1.15%) were down by 7.8% through 11:57 a.m. EDT Tuesday. But while many companies losing ground during the session may have largely been following the market's momentum -- the broader S&P 500 was off by 1.9% -- there could actually be a good reason why investors are punishing the space tourism company.

"Captain Kirk" is going to space, and he's going there with the help of Virgin Galactic rival Blue Origin. 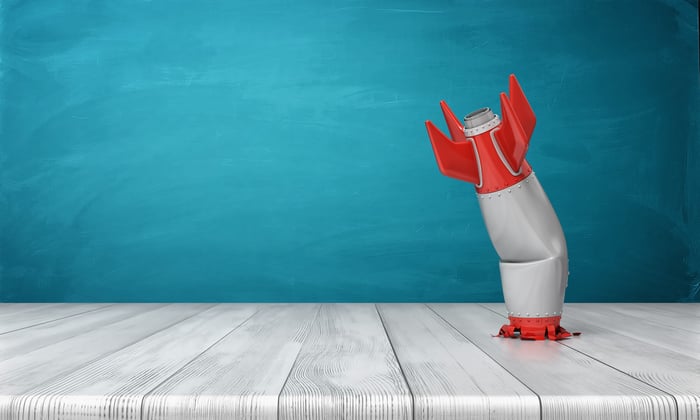 As People magazine (and ABC News) reported Monday, Star Trek star William Shatner "is in talks to head into space on Jeff Bezos' Blue Origin rocket." While his trip isn't 100% certain yet, Blue Origin has announced the identities of two of the four passengers who will travel to the edge of space the next time it launches its New Shepard suborbital rocket. (Both are aerospace tech executives.)

Cryptically, Blue Origin confided that there will be two other mystery guests aboard the rocket, however, and while their identities haven't yet been divulged, the Shatner rumors do line up with the actor's public schedule. If he does fly aboard New Shepard on Oct. 12, he would be back on Earth in time to make his planned appearance at the Indiana Comic Convention 2021 in Indianapolis on Oct. 15.

We're excited to welcome Chris Boshuizen (@cboshuizen) and Glen de Vries (@CaptainClinical) on board #NewShepard #NS18 which will lift off from Launch Site One on Oct. 12. The two other crew will be announced soon. Learn more: https://t.co/qbUpI5OuVI

Suffice it to say that getting Captain Kirk to ride the New Shepard rocket would be a public relations coup for Blue Origin. It would also burnish the company's reputation for flight safety. At 90 years young, Shatner would be the oldest person ever to fly to space -- and he would have chosen Blue Origin over Virgin Galactic to take him safely there and back.

On top of all that, TMZ reports that Blue Origin will turn Shatner's flight into a full-fledged documentary, which will only raise the PR value of this flight for Blue Origin.