Though not profitable yet, this cannabis stock has a bright future.

The U.S. cannabis industry is a very competitive market right now. More states are legalizing recreational and medical use of the drug, which has opened huge doors for domestic players. Investors have many options to pick from.

Massachusetts-based Curaleaf Holdings (CURLF -1.21%) might not be profitable yet, but it is still one of the top contenders in the U.S. cannabis market. It is growing revenue at triple-digit rates with consistent adjusted earnings before interest, taxes, depreciation, and amortization (EBITDA). Let's dive into its recent second-quarter (ended June 30) earnings and see why Curaleaf is a winner in a crowded field of cannabis players. 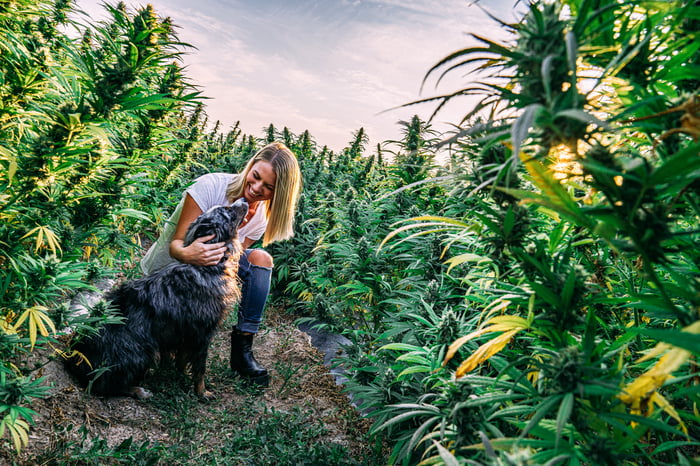 It is not profitable yet, but...

Even if this multistate operator hasn't been able to achieve a positive bottom line yet, it has consistently reported positive EBITDA for the last few quarters. Curaleaf brought in $985 million in revenue over the trailing 12 months, higher than most of its peers. Illinois-based Green Thumb Industries and Florida-based Trulieve Cannabis have around $750 and $713 million in revenue, respectively, over the same period.

In its recent Q2, total revenue for Curaleaf jumped 166% year over year to $312 million. Retail revenue of $222 million contributed around 71% of the total, while wholesale revenue added another $89 million.

Ample growth opportunities in the U.S.

In its second quarter, Curaleaf opened five new stores in Illinois, Pennsylvania, New Jersey, and Maine. This brings its total to 107 stores nationwide. Peers Trulieve and Green Thumb have 100 and 65 stores nationwide, respectively.

Management expects recreational sales in New Jersey to begin in late 2021, ramping up by the first half of 2022. Curaleaf has three stores in the state. Management is also excited about the Connecticut and New York adult-use market, where retail sales are slated to start by the second quarter of 2022 and early 2023, respectively.

The company also expects to have a total of around 60 dispensaries in Florida by the end of 2022. This could help Curaleaf put up a good fight against Trulieve, which is currently dominating the Florida cannabis market with 85 stores. Curaleaf also intends to open eight new retail dispensaries across Arizona, Florida, New Jersey, and Pennsylvania by the end of 2021.

Looking ahead, Curaleaf's management anticipates an incremental market opportunity of $3 billion from Pennsylvania and Maryland by 2023 (once they legalize recreational marijuana).

Curaleaf also invested in several strategic acquisitions in 2020 that are yet to show their full potential. One of them in particular, the acquisition of hemp cannabidiol (CBD) company Grassroots, could prove to be very beneficial in the long run. The acquisition, completed in July 2020, expanded Curaleaf's presence in 23 states with 135 dispensaries licenses and 22 cultivation sites with 1.6 million square feet of current cultivation capacity. It also acquired the cannabis oil brand Select from Cura Partners in February 2020 for $948.8 million. This brand has now grown from 800 outlets at the start of 2020 to 1,700 retail outlets by the end of the fourth quarter of 2020.

Curaleaf estimates it will easily be able to hit its revenue guidance of $1.2 billion to $1.3 billion for the full year.

Not a pot stock to ignore

Strong revenue growth brought in another quarter of positive adjusted EBITDA of $84 million versus $28 million in the year-ago quarter. Much of this growth is because of a 7% increase in patients for its medical cannabis products in June compared to March, according to the management. Sequentially, the company's wholesale accounts also grew by 9% in the second quarter. The company ended Q2 with $334 million of cash and $338 million of outstanding debt (net of unamortized debt discounts).

When it comes to valuation, we turn to Curaleaf's price-to-sales (P/S) ratio since the company is not yet profitable. Curaleaf is trading at 8.3 times sales, which is close to Green Thumb's ratio of eight and higher yet than Trulieve's 4.9. Considering Trulieve and Green Thumb are already profitable, Curaleaf looks expensive, but investors should note that its growth prospects are arguably better. 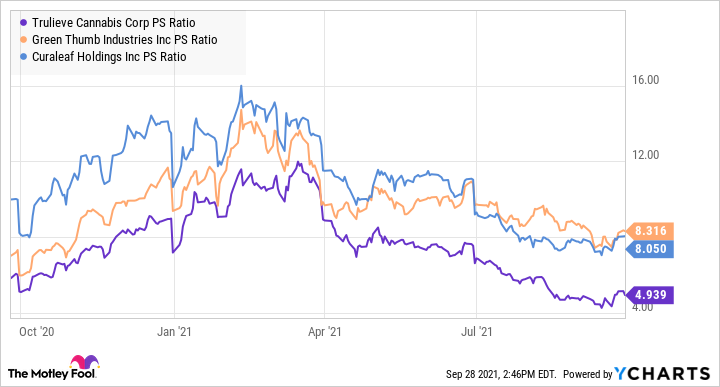 With remarkable revenue growth, solid expansion plans, cost reductions, and a lot of market opportunities ahead, Curaleaf looks like it will be profitable sooner or later, thus making this the right time to consider investing in it. Analysts see an 84% upside for Curaleaf stock in the next 12 months, which it will likely achieve. Investors who are still hesitant about this pot stock can start with a small investment and then increase their stake as Curaleaf moves toward profitability.