LendingClub's purchase of Radius Bank earlier this year is already paying off. Here's what I'm most excited about.

Consumer lending has been transformed by fintech companies over the past decade, and investors have taken notice. Start with Upstart Holdings, whose impressive revenue growth has sent its stock up more than 1,000% since it went public in December.

While Upstart is a solid company making huge strides, investors buying its shares now are paying a hefty premium. At Tuesday's prices, its stock was trading at more than 50 times revenue and almost 40 times tangible book value (TBV). If you're wary of paying that kind of valuation but excited about new opportunities in consumer lending, there's another stock that might be just the thing for you.

LendingClub (LC -0.58%) uses artificial intelligence to help lenders evaluate consumers and ultimately secure them lower interest rates -- just like Upstart. But while many investors are familiar with Upstart and excited about its future, LendingClub trades at a fraction of Upstart's valuation -- a little under 5 times sales and almost 4.5 times TBV as of Tuesday. And it closed its acquisition of Radius Bank earlier this year, putting it in a great position to expand its business and to capitalize on the "open banking" revolution.

I added LendingClub last month following its earnings announcement, which saw it crush analysts' expectations while raising full-year guided earnings by 45%. I think LendingClub can achieve 10X returns over the next decade even if it never earns an Upstart-style valuation. Read on to see why. 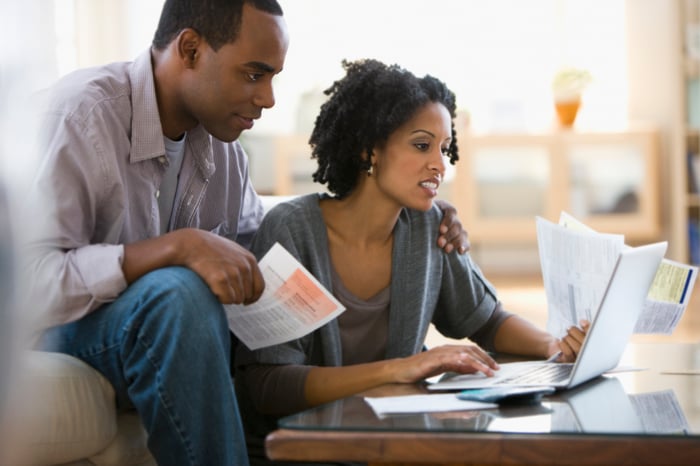 A turnaround story and a big acquisition

LendingClub was founded in 2006 with the goal of bringing installment loans "into the digital age" with its peer-to-peer lending platform. The company struggled after going public in 2014 amid scrutiny over how it sold some of its loans to investors -- a scandal that led its CEO to step down in 2016. Since then, the company has undergone a facelift, shutting down its peer-to-peer platform and acquiring Radius Bank. Thanks to that acquisition, LendingClub can take in deposits and issue loans without having to use a partner bank. Combining LendingClub's loans with Radius Bank's deposits saves money for borrowers due to lower funding costs and gives the company a deposit base that it can lend from.

The acquisition of Radius Bank looks like it's already paying off. In the first half of 2021, LendingClub's marketplace revenue was $233 million, up 92% year over year. Meanwhile, net interest income was $64.4 million, up 49%. As a result, LendingClub's net loss through the first six months of 2021 was $37.7 million -- an improvement from its $126.5 million loss through the first half of last year.

Loan originations in the second quarter were $2.7 billion, with $2.2 billion of those loans sold through its marketplace. The company retained $541 million in loans as part of its new strategy to grow its recurring interest income, which was made possible by the purchase of Radius Bank. CEO Scott Sanborn says that the company sacrificed $54 million in potential earnings this quarter by holding these loans, but that over the long haul, holding these loans should generate three times as much.

The strategy of holding more loans on its books is one reason why revenue growth outpaced originations growth during the second quarter. LendingClub's investment portfolio was up by 12% to $2.4 billion, with consumer loan balances up 44% to $1.3 billion. CFO Tom Casey pointed out that the company was able to generate the same amount of revenue as it did in the third quarter of 2019, but with 20% fewer loan originations.

Another benefit of acquiring Radius Bank is the bank's push into open banking via its application programming interface (API).

Last year, Radius worked with Treasury Prime, a company that seeks to "modernize the banking and technology systems," to develop its Commercial API Banking Platform. As John Relyea, senior VP of commercial API for Radius Bank, explained: "We see a huge opportunity with API Banking to streamline the process of working with businesses, start-ups, and developers who are building applications and businesses that are in search of this type of banking service."

This is part of a broader trend in the banking industry toward open banking, where banks allow other fintechs, lenders, and companies access to their customers' data -- with those customers' permission.

Being able to access this kind of data gives lenders a better idea of a potential borrower's income and spending habits, which can help those institutions make better-quality loans while giving lower-risk customers lower interest rates. It also helps reduce the degree to which lending decisions are bound up with FICO credit scores -- which can cause headaches for those with low or no credit history. A report by Accenture asserts that "up to $416 billion in revenue is at stake" as a result of the open banking wave, and it suggests that much of this revenue is "likely to be captured or defended by agile players who recognize the opportunity early."

How could LendingClub achieve 10X growth?

I think it could be really interesting to see where LendingClub goes from here. Its acquisition of Radius Bank was huge, and the growth opportunity it is driving has begun to manifest itself sooner than expected. The company recently updated its 2021 guidance, with Casey estimating revenue for the full year will land in the $750 million to $780 million range, up 45% from previous estimates. It also raised its origination guidance for the year by 40% to a range of $9.8 billion to $10.2 billion.

In order to achieve 10X growth (based on Tuesday's closing price), LendingClub would need to see its market capitalization grow to nearly $27 billion. Assuming its price-to-sales ratio remains around its current level, and using the higher end of LendingClub's guided revenue of $780 million this year, it would need to grow revenue a little over 21% annually over the next 10 years to achieve this market cap.

This looks like a hefty growth rate, but the lender is gearing up for a period of high growth. Based on $780 million in revenue, 2021 would see revenue grow 71% from 2020. Looking toward next year, analysts expect revenue to grow to $1.09 billion on average in 2022, which would be another 42% growth from the high end of this year's estimates.

The purchase of Radius Bank has given LendingClub a vehicle for holding onto loans, and while this is great for creating a stable revenue stream, I'm most excited about its opening banking plans. These give the lender a huge new opportunity to participate in the fintech world's efforts to revolutionize lending and personal finance.

Why LendingClub Was a Dog of a Stock Today
371%