Please ensure Javascript is enabled for purposes of website accessibility
Log In Help Join The Motley Fool
Free Article Join Over 1 Million Premium Members And Get More In-Depth Stock Guidance and Research
By Travis Hoium – Sep 29, 2021 at 7:31AM

GM's best asset may not be an auto brand, but its autonomous driving unit.

General Motors (GM 0.87%) isn't just an automaker anymore, it's an owner of one of the most advanced autonomous driving companies in the world. The company's majority stake in Cruise isn't just a strategic investment; it could become the biggest value driver for investors over the next decade or more.

If autonomous driving is truly a viable technology that customers will trust, there's no reason autonomous ridesharing can't replace a significant chunk of vehicle ownership. Owning a vehicle with autonomous features seems like owning an airplane when renting a seat to get from Point A to Point B is cheaper and less of a headache. And as a believer in the future of autonomous ridesharing, I think GM could be an absolute home run auto stock for investors.

Uber has shown the way

If Cruise were building the concept of ride-hailing from scratch, it would be one thing, but Uber (UBER -1.01%) and Lyft (LYFT -1.50%) have shown that it can be a huge business around the world. 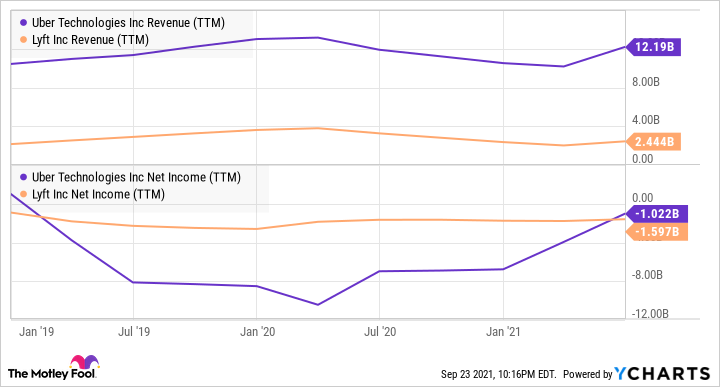 The biggest problem with ride-hailing today is that drivers are expensive and rides are available only when drivers are. Autonomous ridesharing solves both problems, and if a vehicle is built specifically for autonomous ridesharing, it could be built and operated more efficiently than Uber or Lyft vehicles today.

There are some added costs like charging infrastructure, service facilities, and other maintenance that would need to be covered by an autonomous ride-sharing service. But with the cost of drivers and the fact that most vehicles are parked 95% of the time, which can be improved dramatically if vehicles don't need drivers, I think it's likely that dedicated autonomous ride-sharing vehicles will end up being lower cost per mile than traditional ride-sharing, which should help its adoption rate.

GM is upending itself

One of the hardest things for a business to do is upend its core business. Even if it sees disruption a mile away, it's very hard to cut loose a core product to focus on a disruptive product or to upend a company's culture to refocus on a new business model. That's why the decisions GM has made around Cruise are a key aspect to Cruise's future success. Here are a few highlights of the investment thesis:

GM has given Cruise the financial backing to succeed and kept it separate enough to build a disruptive business. If Cruise succeeds, it'll upend GM's auto business. And that's the plan.

Building a disruptive business right under our noses

Given the rapid success of ridesharing around the world and the rapid advances in autonomous vehicles, I think it's likely that within a decade, autonomous ridesharing will be commonplace. And if it is, there are only a handful of companies with the technology to compete.

What's unique about Cruise is that it is building the technology and a custom vehicle and has the financing to build out a huge fleet. The company is set up to disrupt the transportation industry as we know it. And GM's majority stake in the company is the biggest reason to own GM's stock for the long term.