Novartis (NVS -0.24%) announced earlier this month that the U.S. Food and Drug Administration (FDA) accepted its filing for tislelizumab to treat patients with unresectable recurrent locally advanced or metastatic esophageal squamous cell carcinoma (ESCC), which means that a potential FDA approval could come sometime next year.

The news comes eight months after pharma stock Novartis announced a collaboration deal to pay the Chinese biotech Beigene (BGNE -0.60%) $650 million for commercialization rights of the cancer drug tislelizumab in countries outside of China, including the U.S., EU, and Mexico. The deal also included royalties for tislelizumab sales outside of China, as well as milestone payments to Beigene.

Hearing pharma and FDA filings in the news triggers investors to consider their portfolio holdings. Let's take a look at why an eventual FDA approval could be in the near future for Novartis, and how this could translate into a winning deal for the company and its investors. 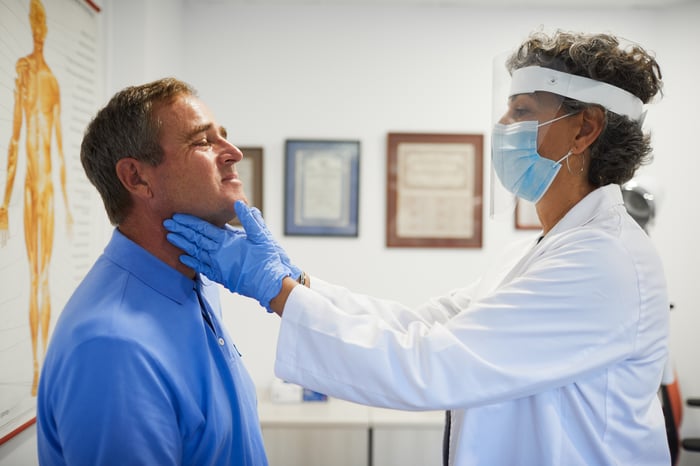 Another effective drug for a terminal disease

The encouraging news for esophageal cancer patients is that there have been a number of advances in treatment in the last few years, which could help to raise survival rates. One of those is Novartis and Beigene's drug tislelizumab.

The phase 3 results from tislelizumab's clinical trial that were announced in June indicate that the drug is quite effective as a monotherapy in treating patients with unresectable recurrent locally advanced or metastatic ESCC. An unresectable and recurrent esophageal cancer is one that isn't able to be surgically removed, which has returned after a period of remission.

And not only did tislelizumab prove itself to be effective in extending the lives of patients with unresectable recurrent locally advanced or metastatic ESCC, but it was also better tolerated by patients than chemotherapy.

Simply put, tislelizumab is another option for oncologists to help patients remain on an effective treatment to combat their esophageal cancer.

Tislelizumab is an excellent treatment option, but what is its true potential in the U.S. esophageal cancer market?

While it's unclear what the drug will net Novartis per patient if ultimately approved in the U.S., I believe a net annual price of $100,000 per patient should appropriately factor in insurance adjustments and Novartis' royalty payments to Beigene. Considering other cancer treatments like Keytruda for example, yield annual payments ranging from $100,000 to nearly $200,000 per patient, my expectations for tislelizumab are fairly conservative.

Assuming that Novartis can fetch 15% of the esophageal cancer market or 3,000 patients (which seems doable given the efficacy and tolerability of the drug), this would work out to $300 million in potential annual revenue in the U.S. alone from this indication.

While this amount of revenue is a fraction of a percent of analysts' average $51.9 billion 2021 sales estimate for Novartis, the U.S. market for esophageal cancer could be just the beginning for tislelizumab. Overall, I believe the drug has the potential to bring in billions in annual revenue for Novartis.

A pharma giant with a diverse portfolio

Aside from tislelizumab, Novartis has plenty of drugs that are gaining acceptance in the market and are positioned to continue growing in the years ahead.

The company's three top-selling drugs that posted sales growth in the first half of this year accounted for 19.7% of its $25.37 billion in total first-half revenue, which demonstrates that Novartis is a balanced pharma company.

The second-highest-grossing drug that grew in the first half is Entresto (used to treat adults with chronic heart failure). Entresto generated 45.8% year-over-year growth from $1.15 billion in first-half revenue last year to $1.68 billion this year.

This robust portfolio of drugs is why analysts are forecasting that Novartis will grow its earnings per share by nearly 8% annually over the next five years.

Considering this growth profile, and that at $83 a share Novartis is trading at only 13 times this year's earnings, Novartis is a reasonably priced large-cap pharma stock.

Could This Biosimilar Drug Candidate Be a Hit for Novartis?
366%