This food company's primary product is increasingly popular, which should lead to years of dividend growth.

When most people think of food companies, they likely think of various prepackaged boxes and cans they regularly see on their grocer's shelves. But there is one food company that has a unique focus that helped it produce nine consecutive years of annual dividend growth, and most consumers have probably never heard of it.

Now on the verge of reaching a key milestone that would earn it Dividend Achiever status, it's perhaps time to learn a bit more about this food maker and why there's plenty of growth still to come -- if it can get through the pandemic hit. 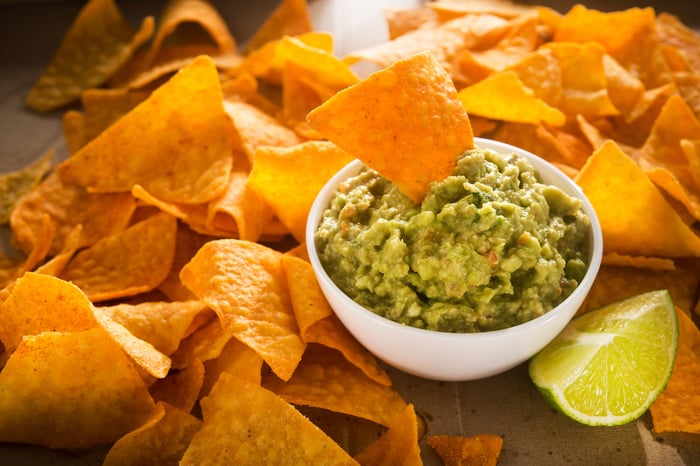 It's not your typical food company

The food maker in question here is Calavo Growers (CVGW 0.84%). As companies go, it's on the small side with a roughly $700 million market cap. However, it is one of North America's largest producers of avocados. Calavo also provides fresh-cut fruit and vegetables and markets guacamole made from its avocados. Don't feel bad if you've never heard of it, it's not a dominant household name like Campbell's Soup or Kraft Mac & Cheese.

As growth potential goes, Calavo definitely has some. For instance, U.S. consumer demand for avocados has increased at a compound annual rate of 8% over the past decade. And still, according to the company, the consumer penetration rate for avocados remains below that of most other common fruits. Granted, avocado demand is expected to fall to a growth rate of around 4% a year over the next few years, so the market Calavo serves appears to be maturing. But management is confident there's still ample room for its core product to continue increasing sales around the country. For one thing, western states eat materially more avocados than midwestern and eastern states.

This is no fly-by-night operation, either. Calavo traces its heritage back to 1924. And while its initial public offering didn't take place until 2002, there are nearly 100 years of operations backing the brand. To further the company's reach, Calavo has expanded into fresh-cut fruits and veggies, offering complementary products and addressing the increasing demand for easy and healthy food offerings. In 2020, it bought Simply Fresh to help further its reach beyond the grocery store and into the hospitality and foodservice sectors. One of the key benefits has been an ability to better leverage the company's 15 production and distribution facilities. While modestly sized, Calavo has an interesting niche, a fairly broad reach, and a solid history of success.

Last year marked the ninth consecutive year of dividend hikes for the food maker. The most recent increase, announced in late 2020, was 4.5%. That's actually fairly notable given that the pandemic trimmed the company's sales by roughly 11.5%. The pain has lingered into 2021, but year-over-year sales turned higher again in the recently ended fiscal third quarter. And through the first nine months of fiscal 2021, the company earned $0.07 per share, compared to a loss of $1.13 over the same period in 2020. In other words, it looks like the business is starting to get back on its feet.

The problem for investors is that Calavo Growers only pays its dividend annually, at the end of the year. So the next payment won't be known for at least a little while longer. Meanwhile, inflation fears and logistical issues have led the company to stop providing guidance. And as if that weren't enough, the CEO and CFO positions are in a state of flux, with the current occupants of both jobs in line to be replaced. In other words, there's a great deal of uncertainty in the air right now.

Wall Street doesn't like uncertainty, and the stock price has fallen by roughly 50% since hitting a peak in March. That's pushed the dividend yield up to around 3%, which is historically high for Calavo. However, that assumes the company pays its annual dividend in 2021. 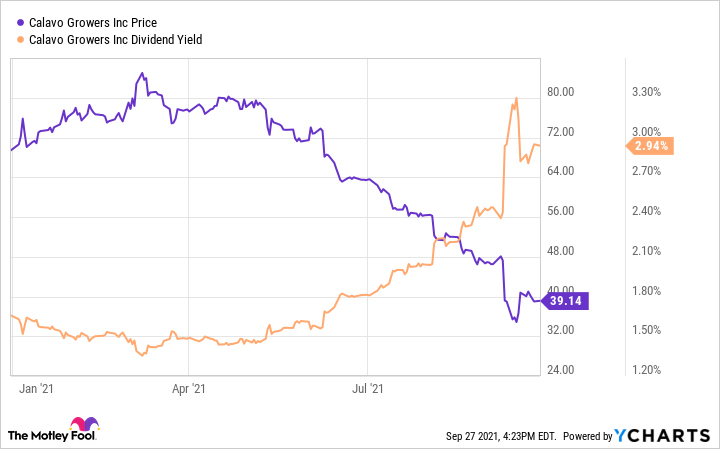 When asked about the dividend by analysts on the fiscal-third-quarter 2021 earnings call, management noted that it believes the problems it is facing today are temporary, and it is looking for areas to cut costs and working to raise prices. Management also highlighted the strength of the company's balance sheet, with the debt-to-equity ratio at a modest 0.16 times. If it needed to, Calavo could probably take on debt to fund the dividend. Interim CEO and longtime board member Steven Hollister stated that, "Our plan at this point in time is not to change [the dividend]."

There are a few takeaways here. First, assuming that the company's board agrees with the management team on the company's outlook, the 2021 dividend looks like it could be the same as last year. Second, that suggests that the historically high dividend yield could be a buying opportunity. However, the third point is that this also means that Calavo will fall short of reaching Dividend Achiever status. But if the dividend holds, that isn't the worst thing in the world, given that the dividend trend is still roughly higher over time.

Business goes in cycles, so the fact that Calavo is experiencing a rough patch is hardly shocking. Given its strong balance sheet and the solid core demand for avocados, it is highly likely to muddle through.

The big question for income investors is the dividend. It seems like the best-case scenario is the dividend gets sustained at its 2020 level, which means Calavo doesn't become a Dividend Achiever. But for those looking for a turnaround stock, the current sell-off could be a buying opportunity, noting the historically high dividend yield.

The downside is the potential for a dividend cut. But that appears to be priced into the stock already. And if the business does pick up as management expects, which demand for avocados and fresh-cut fruit and veggies hints is likely, then Calavo could quickly get back on the dividend growth track again.

Calavo is not a great option for conservative investors right now. However, more aggressive types might find the risk/reward trade-off here worth the price of admission. Even the worst-case scenario, a dividend cut, isn't actually that bad given the already material drop in the stock price.