If you're enjoying the new Netflix show about discarded people putting their lives on the side for a big payday let's put some discarded stocks -- all trading 50% below their 52-week highs -- through the paces.

The top show on Netflix (NFLX 3.14%) these days is Squid Game. Some reports claim that the South Korean survivalist thriller is on the verge of unseating Bridgerton as the most streamed show in Netflix history.

The premise of the dystopian show is twisted but potent. It starts with 456 people -- all desperate for money and purpose after being discarded by society -- playing a series of violent versions of kid games. Big money awaits the eventual survivor.

Let's play Squid Game with stocks. I screened for stocks that are trading more than 50% below their 52-week highs, forgotten stocks in a market near all-time highs. I then narrowed the field to some names that caught my eye as potential growth stocks. We don't have the time to go through 456 players here, of course. These are the six names that I settled on for this particular survival-of-the-fittest contest, and how far they were from their 52-week highs as of Wednesday's close.

Everyone in? Great. Let's play. 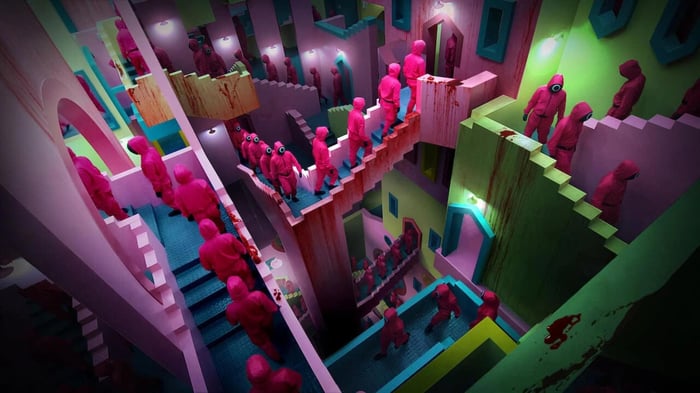 Let's start with a speed test. Are these companies generating more revenue than they were two years ago? A one-year comparison is silly given the pandemic, but how many of these companies either found a way to thrive through the COVID-19 crisis or at least found a way to more than recover from the malaise? Let's go over the two-year revenue growth rate based on each company's most recent quarter.

We're losing just one player in this game. AMC Entertainment is doing a lot of things right to gain market share in the multiplex market, but it's toiling away in an industry that still has a long way to go to return to pre-pandemic form. The other five stocks have seen their business more than double over the past two years even as their shares retreat.

A lot of children's games -- from jumping rope to jacks -- are about rhythm. Can you keep the beat going in sync with the swinging rope or the bouncing ball? Companies are that way, too. Exceed quarterly expectations and good things typically happen. I looked at the five remaining companies from the lens of how they performed relative to earnings expectations over the past four quarters.

Investors will naturally prefer stocks that routinely smoke expectations, but I set the bar low here since stocks don't shed more than half of their value in a rising market by accident. Stocks that didn't beat earnings expectations in at least half of the quarterly reports over the past year were nixed.

Teladoc and Beyond Meat have had their share of struggles. Teladoc has roughly shed the initial value of its Livongo Health acquisition, but it's also been perpetually posting larger losses than analysts are modeling. Its telehealth niche is also becoming a lot more competitive this year. Beyond Meat hasn't been able to catch a break. Last year its foodservice business took a hit as restaurant closures decimated sales. Now we're seeing retail sales slide in the U.S., with panic buying a year ago forcing a challenging comparison.

A childhood game that can sting is red hands, also known as hot hands, slapsies, or various other regional variations. Players take their turns extending their hands, and moving them out of the way when the other player tries to slap them.

The goal here is to avoid having red hands, and for this final test we want to see which remaining players don't have red income statements. Only the companies that are profitable remain.

Lemonade and Peloton are delivering healthy growth on the top line as they reinvent the insurance and home fitness markets, respectively, but the same can't be said for the bottom line. Both companies are currently in the red, and neither is expected to turn a profit in 2022 or 2023 either. Only Zoom -- the videoconferencing giant that exploded on the scene last year in the wake of the pandemic's social distancing norms -- is profitable.

Zoom wins this first edition of the stock market's Squid Game. Let's play again with a new set of players and games in a few days.