The online apparel retailer is out of favor right now, but remains a great growth story in the making.

The apparel industry has been hot this year. As the effects of the pandemic ease, households have begun prioritizing wardrobe updates once again, making clothes and accessories one of the biggest rebound stories in 2021. Many apparel retailer stocks have jumped as a result.

But not Stitch Fix (SFIX 0.37%). Share prices of the online apparel business are down nearly 33% so far this year. Its out-of-favor status is hiding a growth story, though, and shares could be too cheap to ignore. 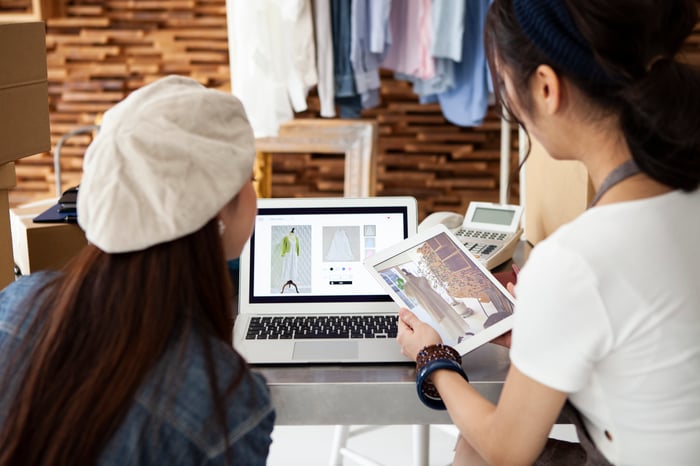 Stitch Fix is underperforming on price and valuation, but not on style

Stitch Fix has attracted nearly 4.2 million customers in its short history of custom-curating boxes of clothes and accessories, and it's still going strong. After notching a 23% gain in total sales to $2.1 billion in fiscal 2021 (the 12 months ended July 31, 2021), the company is forecasting another 15% or better rise for fiscal 2022.

Normally this kind of growth story would command more growth investor attention. After all, some of Stitch Fix's apparel industry and textile peers that also do well in the digital sales department have price to sales ratios an order of magnitude higher.

So why the horrific performance, especially considering Stitch Fix weathered the pandemic far better than many of its apparel retail competitors? (Though admittedly some of the names above grew in the double-digit percentages in the last year because they were rallying after a terrible showing in 2020.) Stitch Fix is valued much more in line with traditional clothing sellers, many of which are still modernizing their operations for the digital era.

For one thing, there's still doubt among some investors about whether the "personal stylist enhanced by machine learning" business model Stitch Fix has helped pioneer is the real deal. Though Stitch Fix is only a decade old, it does appear to be losing some steam in acquiring new users and boosting revenue. Fashion is a brutally competitive space, and enduring long-term growth stories like Nike or Lululemon are rare. To expand its reach with consumers, Stitch Fix's Freestyle service (in which customers can pick their own pieces without the help of a stylist) could go a long way toward keeping momentum going -- but also makes Stitch Fix look a bit more like many of its traditional ensemble retail peers.

A lack of profitability (at least on an unadjusted basis) could also be keeping other investors away from this stock. Stitch Fix generated a net loss of $8.9 million last year, though adjusted EBITDA clocked in at $64.9 million. These losses are in part by design, as the company is pouring lots of cash into sales and marketing to acquire new customers, but eliminating some red dye from its bottom line could help change the narrative here.

The doubters have had their way with Stitch Fix stock this year, but the growth story nevertheless appears intact. Given its expectation that it will grow at a healthy double-digit pace in fiscal 2022 and generate an adjusted EBITDA profit margin of at least 2%, I'm not so sure Stitch Fix deserves its paltry valuation, which lumps it in with older apparel industry incumbents.

Granted, this is still a small company funneling plenty of money into growth initiatives, so expect the share price to remain highly volatile as Stitch Fix enters its new fiscal year. But online clothes shopping is still early in development, and its smart use of AI software to aid in wardrobe selection has helped this digital retailer score millions of users in just a few years' time. This stock could still be a long-term winner trading at an attractive value right now.