Please ensure Javascript is enabled for purposes of website accessibility
Log In Help Join The Motley Fool
Free Article
Join Nearly 1 Million Premium Members And Get More In-Depth Stock Guidance and Research
By Will Healy – Oct 2, 2021 at 11:17AM

These companies will support income investors and, later, possibly growth investors as well.

The month of September has seen some considerable daily drops in the major indexes. While stocks still trade well above bear market territory, the massive increase in many key stocks since March 2020 has prompted concerns that a pullback could come sooner rather than later.

However, investors tend to hold dividend stocks during such times, as maintaining a steady, rising payout for an extended period tends to build confidence in a stock. Moreover, many income investors depend on the cash payments from dividend stocks, making them more reluctant to sell. Given those factors, stocks such as Chevron (CVX -0.80%), Medical Properties Trust (MPW 0.46%), and Verizon Communications (VZ -0.39%) can serve investors well in a challenging market. 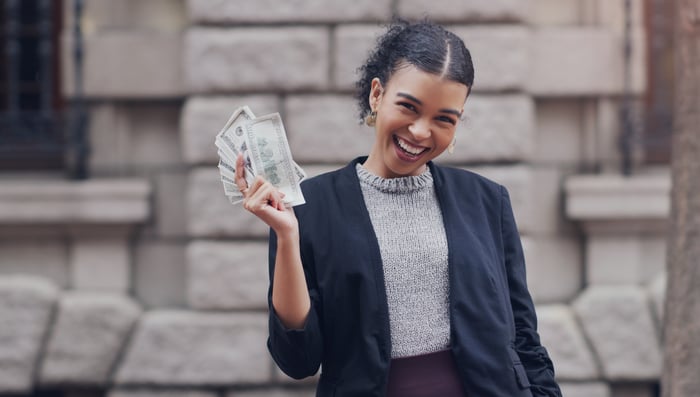 Before the pandemic, Chevron had traded approximately 10% below its 2014 high as energy prices had not returned to the levels experienced in the middle of the last decade. However, today's investors have more closely focused on the decline that briefly wiped out more than half of its value following the shutdowns prompted by COVID-19. At that time, an unprecedented drop in consumption threatened Chevron's free cash flow. Consequently, the company issued $17 billion in debt to preserve its payout and finance its $9.4 billion acquisition of Noble Energy.

Fortunately for its investors, the stock recovered most of its value lost in the spring of 2020. In April, Chevron hiked its payout for the 34th consecutive year to $5.36 per share annually, amounting to a 5.2% cash return. Such a record is possible since most recessions or even financial crises only modestly reduce consumption.

And for all of the discussion of renewables, oil and gas make up 69% of all energy consumption in the U.S., according to the Energy Information Administration. And oil and gas account for most of Chevron's revenue.

Nonetheless, even with this shortfall, the $7.7 billion in free cash flow generated during that period allowed Chevron to cover $5 billion in dividend costs. Moreover, Chevron stock still trades at a 14% discount to its level at the beginning of 2020. Even if the industry and stock price struggles persist for the foreseeable future, investors can buy the stock at a discount and earn a generous cash return.

Like Chevron, Medical Properties Trust benefits from a steady stream of business that a market crash will likely not affect. The company leases its 446 healthcare facilities to clients in nine countries. Additionally, in its largest market, the U.S., the real estate investment trust (REIT) should benefit from the fact that 10,000 people per day will age into Medicare through the end of the decade, stoking demand for such properties.

Furthermore, it must pay at least 90% of its net income in the form of dividends to maintain its REIT status. This helps to boost its annual payout, which now stands at $1.12 per share. The dividend, which has risen for eight straight years, yields a cash return of 5.5%.

The company reported revenue of $745 million in the first six months of 2021, 27% more than during the same time in 2020. Net income also rose 46% during that time to $278 million. The company earned $19 million in other income during this time, primarily from equity interests, helping to boost net income.

This income increase led to $394 million in adjusted funds from operations (AFFO) during the first half of 2021, a free cash flow measure for REITs. Wth the AFFO income, Medical Properties covered $311 million in dividend costs in the first six months of the year.

Additionally, the stock rose 17% over the last year, and its P/E ratio of 22 remains in line with historical averages. Given its recession-resistant business and rising payouts, Medical Properties should serve investors well regardless of a market crash.

Verizon is another company that can be perfect for dividend investors. Consumers and businesses tend to maintain wireless and internet services in more challenging times. Verizon should also benefit as the advancement of 5G, artificial intelligence, virtual reality, and the Internet of Things will continue regardless of the market's performance.

This should foster growth in Verizon's burgeoning network-as-a-service (NaaS) business. This data subscription service can link and power systems including self-driving cars, edge computing networks, and remote sensors. The efficiencies brought by this technology should appeal to businesses even if their stocks face near-term challenges.

This technology has not yet led to a massive tailwind for the top and bottom lines. Revenue of $67 billion in the first half of 2021 increased 7% from the same period in 2020. Also, while income of $11 billion surged 24% over the same time frame, lower expenses and a pension reimbursement gain of $1.3 billion drove much of the increase.

Nonetheless, the $2.56 per share annual dividend rose for the 15th straight year, and new buyers will earn a cash return of 4.7% from the payout. Also, while the stock has dropped 8% over the last year, the P/E ratio of 11 reduces the odds of further significant stock declines. As stockholders collect dividends, Verizon could eventually move higher as the tech industry turns more to NaaS.