This tech company could help you beat the market.

The Trade Desk (TTD 1.55%) has become a key player in the digital ad industry. The company takes a different approach than rivals like Alphabet's (GOOG -1.26%) (GOOGL -1.30%) Google and Facebook (META 1.23%), and it offers investors a rare combination of high growth and solid profitability. As a result, the share price has soared 366% over the last three years, crushing the broader market.

Even so, it's not too late to buy this growth stock. The Trade Desk has hardly scratched the surface of its market opportunity, and digital ad spend is still growing rapidly around the world. In fact, I think shareholders could see fivefold returns by 2030. Here's why. 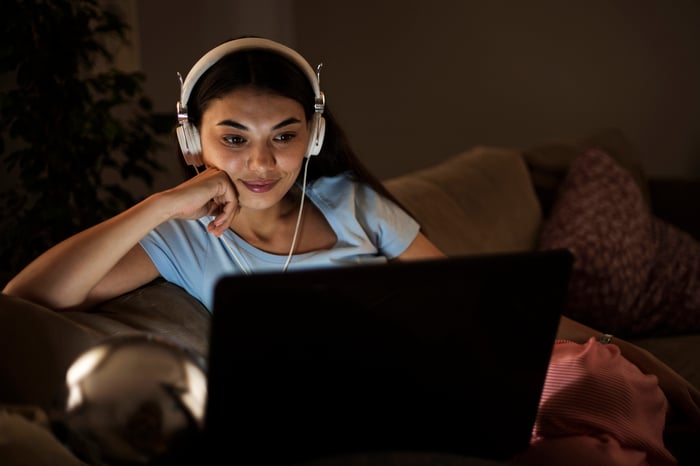 Traditionally, ad buyers have negotiated with publishers (i.e., suppliers) to manually purchase digital ad space. Programmatic advertising automates these negotiations through real-time bidding, making the process more efficient on both sides of the transaction. Likewise, programmatic ads can also be targeted more effectively, increasing the value of ad impressions for both buyers and suppliers.

According to eMarketer, global ad spend will reach $747 billion in 2021. But only 61% of that total ($455 billion) will go toward digital ads, and just 21% ($155 billion) will be transacted programmatically. However, these formats are gaining share, and The Trade Desk believes the future of all media is digital and programmatic. That puts the company in front of a massive market opportunity.

The Trade Desk is an independent DSP, meaning it doesn't own any media content. This differentiates it from ad titans like Google and Facebook, the two most dominant players in the digital ad space.

Specifically, Google and Facebook are incentivized to push ad buyers toward their own content and ad inventory (YouTube, Instagram), and both also work with third-party publishers, creating a conflict of interest. By comparison, The Trade Desk doesn't own any ad inventory, and it works only on the buy-side of the equation, eliminating these conflicts of interest. This has helped the company keep its customer retention rate over 95% for the last seven consecutive years.

Moreover, The Trade Desk is the leading independent DSP, meaning it has achieved greater scale than any of its rivals. In fact, the company connects ad buyers with over 600 billion opportunities each day, and as its platform powers more campaigns, it correlates more viewer demographics with outcomes like clicks and conversions. This makes The Trade Desk's artificial intelligence engine more effective in helping clients target ads.

Powered by its strong competitive position, The Trade Desk has delivered an impressive financial performance in recent years. Its top line has grown quickly, outpacing the growth of the broader digital ad industry, meaning the company is taking market share. And unlike many high-growth tech companies, The Trade Desk is profitable on a GAAP basis.

More importantly, The Trade Desk's future looks even brighter. The company has a massive market opportunity, and management is executing on a strong growth strategy across several different verticals.

For instance, The Trade Desk has forged new partnerships with publishers to expand its access to CTV inventory, helping ad buyers reach viewers of streaming content. The company currently leads the market in the U.S. and Australia in terms of CTV ad spend, but its business is growing quickly in other geographies, too. According to CEO Jeff Green, "CTV revenue in Europe was up more than tenfold in the second quarter."

Likewise, The Trade Desk sees a massive $200 billion opportunity in shopper marketing, and it recently partnered with Walmart -- the largest retailer in the world -- to boost its presence in this space. More broadly, The Trade Desk recently launched the latest version of its platform, Solimar, creating the industry's most advanced measurement marketplace. This will expand access to retail data, helping advertisers better correlate ad spend with in-store and online sales.

The potential for fivefold growth

Currently, The Trade Desk has a market cap of $37 billion, but I think that figure could quite easily reach $185 billion by 2030. Consider this scenario: If The Trade Desk can maintain top-line growth of just 30% over the next nine years, its revenue would reach $11 billion. Assuming the stock trades for 17 times sales -- a far more reasonable valuation than its current price-to-sales multiple of 37 -- the company would achieve a market cap of $187 billion, meaning investors would see fivefold returns. And even if this scenario plays out, The Trade Desk would still be worth a fraction of what Alphabet and Facebook are worth today.

That's why this growth stock looks like a smart long-term investment.