Granted, the whole stock market has been having a rather bad day. The S&P 500 is down 1.5%, and growth stocks in particular are taking it on the chin. But Apple's particular decline seems directly traceable to an article that ran in The Wall Street Journal over the weekend. 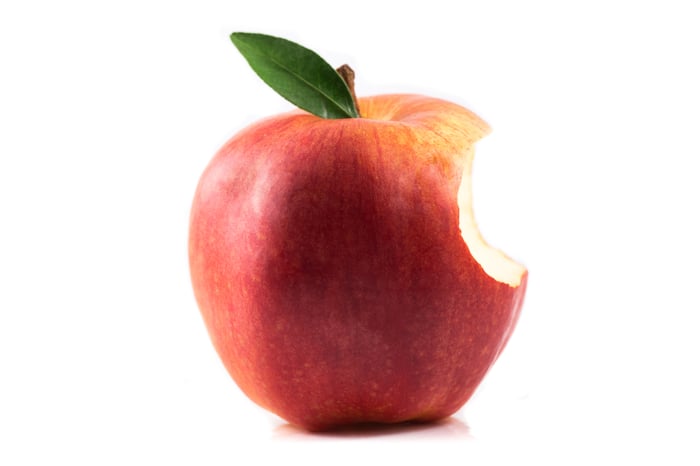 Calling Apple "the hottest player in gaming," the Journal proceeded to explain how Apple's App Store has been racking up eye-popping operating profit margins on in-game purchases facilitated by its software. In 2019 alone, reports the paper, Apple recorded $8.5 billion in operating profit from game sales, more than was earned by Microsoft (MSFT -0.80%), Nintendo (NTDOY -0.48%), Activision Blizzard (ATVI 0.54%), and Sony (SONY 1.50%) -- combined.

With operating profit margins of nearly 29% (according to data from S&P Global Market Intelligence), Apple is already known to be a collector of gargantuan profits, but the money it's making in games is of an entirely different order. According to sources cited by the Journal, game revenues collected through the App Store earn operating profit margins as high as 75%!

Now, all of the above sounds like pretty good news for Apple -- hardly the stuff of which stock declines are usually made. But the Journal seems to be of the opinion that as Apple's App Store profit margins become more common knowledge, they might serve as ammunition for Apple's opponents in litigation seeking sales via the App Store -- or at least as pressure points to get Apple to lower its 30% fee on App Store sales.

The paper furthermore points out that because "just 6% of App Store game customers in 2017 accounted for 88% of all the store's game billings for the year... [and] almost 31% of [gaming revenues come from] China while 26% was in the U.S.," Apple's gaming revenues (and profits) could be at risk in their two most important markets.

In China, government regulators are cracking down on gaming by kids and attempting to limit online video game playing to no more than three hours a week. Combine that now with U.S. game companies highlighting -- and challenging -- the seemingly too-large profit Apple earns from the gaming companies' work, and Apple's gaming profits could soon be approaching a tilt moment.