If you missed Disney's Florida resort turning 50 over the weekend, you still have time to literally pay your respects.

Walt Disney's (DIS 0.42%) huge theme park resort in Florida turned 50 over the weekend. If you missed the fete, don't worry. Disney World will profit through patience, as it's stretching the golden anniversary celebration until at least the end of March of 2023.

The 18-month celebration is lengthy by design. It will give Disney World the ability to spread out the opening of new rides and attractions. It will also help the House of Mouse work any kinks out of the new experiences. Disney World will wait for you, and it's going to make a lot of money from others until you come around to pay your respects. 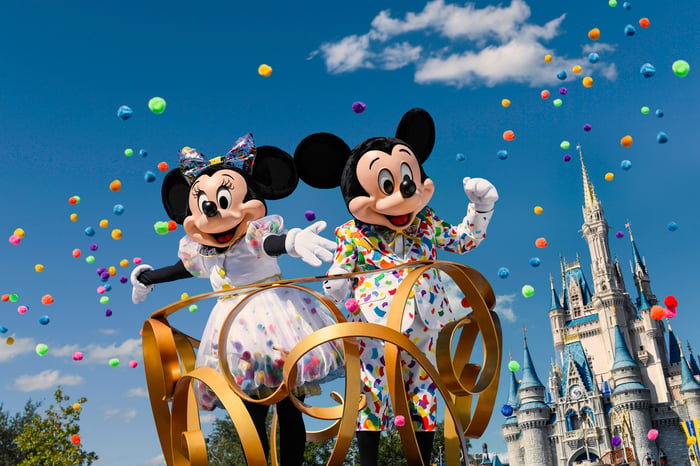 Everything is going as planned

One of the more incomplete observations of Disney World during the celebration's opening weekend is that ride wait times were surprisingly reasonable. Rarely was the queue length for even the most popular attractions longer than an hour.

Short wait times are great for guests, but in this case, the reason is also great for Disney and its shareholders. Despite folks flocking to Disney World over the weekend -- particularly at the Magic Kingdom and Epcot parks -- the longest lines were found at gift shops selling commemorative merchandise and food stands selling unique items themed to the resort's golden anniversary. In short, people were lining up in the queues that end with cash registers.

Naturally, there'll come a point during this celebration where short ride-wait times could hurt Disney's bottom line. Once the initial scramble for commemorative merchandise and eats wears thin, the next big levers for Disney to pull are the Genie+ and Lightning Lane+ features. Following in the footsteps of smaller theme park operators, Disney will begin charging for access to expedited queues in the near future.

Having guests pay $15 per day for access to Genie+ -- where guests can reserve return windows for the quicker-moving FastPass lines that are being rebranded as Lightning Lane queues -- is a game changer for Disney. It will level the playing field for day guests who are already paying north of $100 for a single day at a park, compared to annual-pass holders who are paying less than $4 a day for year-round access. Genie+ will also make guests stay at the park longer, milking as much as they can from the $15 per-person investment.

Lightning Lane+ will be even more intriguing. Disney is holding back on Genie+ access to some of its more popular rides. Guests will have to pay a one-time premium -- likely somewhere between $10 and $30 -- to experience that attraction's expedited queue. Lightning Lane+ isn't going to be a compelling value proposition if the standby line is short.

It's still a delicate balance here for the top dog of travel and tourism stocks. Can it woo guests willing to pay more for premium features that enhance a day at the park without alienating those who will be seething from the standby line?

It's a question that Disney will have to answer, and if it doesn't get it right initially, it will thankfully have 18 months in this drawn-out celebration to figure it out.