Investors may be worried about whether the company can hold onto COVID-related gains.

Shares of online healthcare company Teladoc (TDOC -3.40%) dropped 12.2% in September according to data provided by S&P Global Market Intelligence. The stock opened at $144.86 per share on Sept. 1 and closed at $126.81 on Sept. 30, the final day in the month that markets were open; and it never really rallied throughout the month. 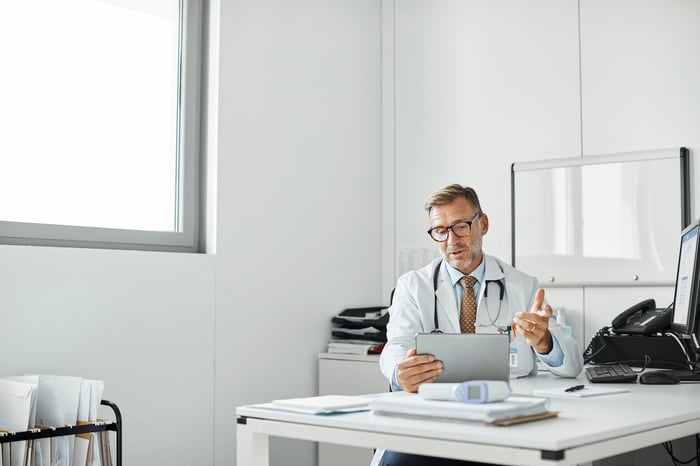 Investors are seeing the stock as too COVID dependent, in that its business plan is reliant on people staying at home and out of their doctors' offices. From 2018 to 2019, the company's annual revenue climbed 32%, but last year, once the pandemic hit, Teladoc's annual revenue rose 97.8%.

Though the company is still seeing growth this year, with reported revenue of $954.8 million through six months, up 1,264% year over year, many are concerned that growth can't be sustained once people go back to work and return in-person to their doctors' offices.

The last worry is that big-time competitors are coming for the company's market share. Just this year, insurer Cigna, through its Evernorth division, purchased MDLive; Amazon greatly expanded Amazon Care; and Walmart has a purchase of MeMD in the works.

Few people doubt there's a big future for telehealth, even after the pandemic. A report by the Center for Connected Medicine found that while health systems expect telemedicine to decline once the pandemic ebbs, they still plan to expand telehealth services in the future.

Teladoc isn't likely going away either, with its early-to-market advantage and a brand name that has become synonymous with telehealth. However, this healthcare stock play is definitely for the long-term investor, as it may be a while until the company is making a profit.

In the meantime, its rapid revenue growth may slow, but the company is continuing to add subscribers. Through six months, its subscription revenue alone was 47% higher than last year. I think this shows that now that people have seen the possibilities of Teladoc, it has a greater chance of adoption by individuals and by companies.