These two stocks can energize your portfolio.

Despite the short-run volatility, there are still several quality growth stocks that can earn handsome returns for retail investors in the long run. Wall Street analysts estimate that HubSpot (HUBS -0.64%) and Okta (OKTA -3.48%) will increase their sales by 131% and 176%, respectively, in just the next two years. Those expectations coupled with solid competitive advantages make these stocks attractive picks. 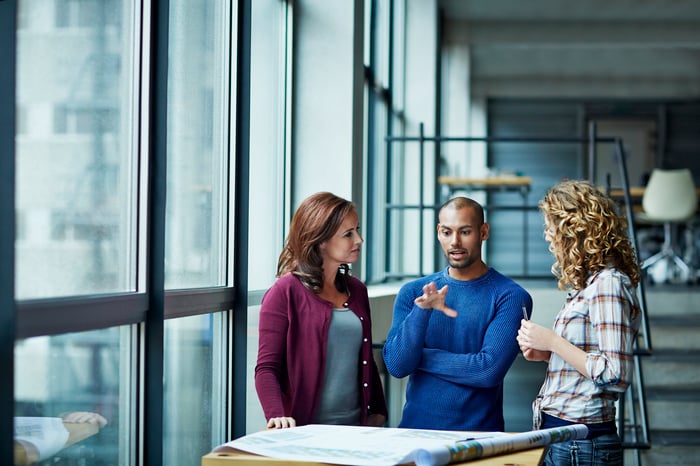 The stock of inbound marketing specialist HubSpot has gained over 80% so far this year, and for good reason. Instead of costlier traditional push marketing tactics (unsolicited advertising), HubSpot's customer relationship management (CRM) software enables its clients to create engaging content for their brands and then draw in leads from audiences who are already interested in this information. The company's CRM platform also helps clients optimize their sales, marketing, and service functions.

HubSpot has reported over 30% year-over-year revenue growth for the past three years. Analysts expect a solid 131% jump in the company's sales by 2023. This acceleration in revenue momentum is expected to be driven by continued success in its multi-product strategy, strength in enterprise segment, and increasing cross-selling activities.

HubSpot's freemium pricing strategy (attracting customers with free products and then scaling them up to paid products) is working well, evidenced by the company's customer base expanding by 40% year over year to 121,000 in the second quarter, which ended June 30. The company is also witnessing success in upselling, as 58% of its customers were using two or more products in the second quarter.

The rapid increase in its customer base has led to more companies building third-party applications using HubSpot application programming interfaces (APIs). This has strengthened the company's ecosystem and resulted in powerful network effects for the company.

Finally, increasing penetration in the enterprise market coupled with increased adoption of more products by the installed base is also driving up the company's average subscription revenue per customer.

HubSpot currently trades at 27 times trailing 12-month (TTM) sales, which is very pricey compared to the software industry's median price-to-sales (P/S) multiple of 3.75. However, considering its robust growth prospects, the stock seems to be an attractive buy even at these elevated levels.

Identity and access management player Okta offers cloud-based workforce identity and customer identity solutions, which ensure that only authorized employees and customers have access to the correct type of resources. The company has reported over 40% year-over-year revenue growth in the past three fiscal years. Analysts expect Okta's sales to grow by 176% in the next two years, driven mainly by increased enterprise spending on identity security solutions.

The company's identity management solutions are based on a zero-trust security framework, wherein every user is validated multiple times before being given access to data and resources. Zero-trust security has become all the more important, with an increasing prevalence of flexible work arrangements and the rising adoption of the public cloud.

According to Forrester Research, Okta is already a leader in the enterprise identity-as-a-service market. The latest earnings results have seen the company firing on all cylinders, both as a stand-alone company as well as in combination with recently acquired Auth0. In the second quarter (ending July 31, 2021), the company's revenue was up 57% year over year to $316 million.

With subscription revenue accounting for almost 96% of the total, the company enjoys strong revenue visibility. The dollar-based net expansion rate for the last 12 months was a solid 124%, implying that existing customers spent 24% more on the company's products as compared to the previous year.

The company also reported a 57% year-over-year jump in remaining performance obligations (billed and unbilled contracted subscription revenue that is not yet recognized) to $2.24 billion, a solid indicator of the company's future revenue momentum.

The acquisition of Auth0 has opened opportunities for Okta to cross-sell in its installed base and to add new customers from international markets. While the company is not yet profitable, it will most likely break even in the next two to three years. Okta estimates its target addressable market to be $80 billion. Against this backdrop, with an annual run rate of just over $1 billion, there is still much scope for the category leader to grow in coming years.

Why Okta Stock Crushed the Market on Tuesday
376%