Please ensure Javascript is enabled for purposes of website accessibility
Free Article Join Over 1 Million Premium Members And Get More In-Depth Stock Guidance and Research
By Nicholas Rossolillo - Oct 7, 2021 at 5:57AM

Qualcomm is looking to build up its business beyond just smartphones.

A more connected mobile world is being built in earnest. However, a key piece of consumer hardware squarely in technology companies' crosshairs is vehicles. Often running on chips and circuitry that are decades old, many automakers are scrambling to get their models up to date with the latest in connectivity, electric drivetrains, and advanced driver assistance systems (ADAS).

To that end, it shouldn't go unnoticed that Qualcomm ( QCOM -0.60% ) and investment firm SSW Partners just reached a definitive agreement to acquire auto tech company Veoneer ( VNE -0.23% ). The deal values the small technologist at $4.5 billion (to be paid as $37 per share in cash to Veoneer shareholders). This buyout could let Qualcomm, a leader in mobile chips for smartphones and related devices, seriously ramp up its presence on the road. Here are three reasons why. 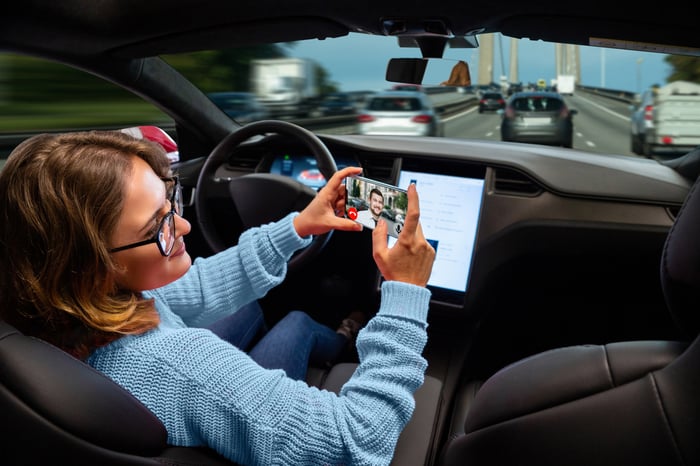 It's clear Qualcomm really wants in on the auto industry, and for good reason. Tens of millions of vehicles are sold globally every year, and by the end of this decade, an estimated half of a car's cost of production will be electronic components (up from about 40% now). As a result, one of the most profitable parts of the auto industry supply chain is high-end tech.

Thus the agreement to acquire Veoneer, which reports in two primary segments: Active safety (i.e., ADAS) and restraint control systems (tightening of seatbelts and deployment of airbags in case of an accident). Qualcomm and SSW Partners actually outbid Canadian auto supplier Magna ( MGA 3.01% ) for Veoneer, which had offered Veoneer shareholders $31.25 per share in cash this past summer.

But Qualcomm isn't interested in airbags and seatbelts. SSW Partners will retain that business segment and sell the active safety division to Qualcomm, which will augment its own ADAS platform with Veoneer's software and designs for sensors including radar, LiDAR, camera-based vision, and the like. Paired with Qualcomm's mobile processors, the auto industry will have a new powerful product partner for designing advanced safety controls, progressively more autonomous vehicle functionality, and connectivity features.

Unifying more parts and systems of a car to a single supplier can help an automaker boost profit margins. After all, bulk orders often mean lower average cost per unit purchased.

But for Qualcomm, its strategy is more than just boosting how many pieces of a vehicle's tech system it can sell. It's also about creating a compelling platform that automakers will spring for in the first place. After all, many components are mission-critical in a car, so a tried-and-true system is better than upgrading to the latest circuitry designs that might require a total overhaul for auto engineers.

Thus, Veoneer is only part of a grander strategy. This past summer, Qualcomm also purchased CPU designer NUVIA. NUVIA's CPUs will find primary use in smartphones and laptops. But at the time the acquisition was made, Qualcomm said NUVIA will also be applied in other emerging departments for Qualcomm, like digital cockpits (the multiple digital screens displaying info within new cars that have mostly replaced traditional instrument clusters) and driver-assist systems.

Put another way, Qualcomm is stitching together multiple technologies via acquisition and its own in-house development for all sorts of tech within the modern vehicle. If it can update enough of these components and get them all working together fluidly, it might be able to convince automakers to start upgrading to newer (and more profitable, for Qualcomm) semiconductors and related hardware.

Diversifying away from future "legacy" products

Through the first nine months of its 2021 fiscal year, over three-quarters of Qualcomm's business is derived from the mobile industry -- mostly component designs for smartphones. Qualcomm has a stranglehold on some of these mobility chips, but it could be facing losses in this department in the years ahead. Apple, for example, acquired Intel's mobile modem business. This is clearly a shot at Qualcomm's very profitable smartphone supplier relationship as Apple may intend to bring modem design in-house.

But Veoneer will help Qualcomm up its game on a new front. Qualcomm's auto segment hauled in just $253 million in the last reported quarter (or a measly 4% of total revenue). Veoneer's active safety division hauled in $197 million in its latest quarter. Once combined, Qualcomm could be looking at a nearly 80% jump in automotive sales including the acquired business -- with much more growth on the way if it can convince more automakers to use its expanding connected vehicle platform.

To be sure, automotive products would still represent a small fraction of Qualcomm's total business even after adding Veoneer, but it's well on its way to extending its mobility chips to the auto world. Advanced driver assist systems, vehicle autonomy, and connectivity are still early on in development, and Qualcomm clearly has its sights set on being a leader in this space.