Wall Street is hoping to start out strong.

The stock market has been volatile, with a pullback in September reminding investors that stocks don't always move straight up. Nevertheless, some progress in Washington toward potentially reaching a resolution to the current debt crisis spurred enthusiasm among Wall Street's finest. As of 8 a.m. EDT, futures contracts on the Dow Jones Industrial Average (^DJI) were up 288 points to 34,579. S&P 500 (^GSPC 0.75%) futures rose 42 points to 4,396, and Nasdaq Composite (^IXIC) futures were higher by 180 points to 14,938.

Earnings season doesn't kick off until next week, but a few companies are still reporting their results, and last night's numbers from Levi Strauss (LEVI 2.56%) showed a generally positive tone in retail that is encouraging going into the holiday shopping season. Meanwhile, after considerable speculation, Meredith (MDP) finally received a formal acquisition bid that relieved nervous shareholders in the publishing company. We'll discuss both stocks below and their role in helping push the market higher.

Shares of Levi Strauss were higher in the premarket trading session by more than 5%. The jeans maker reported fiscal third-quarter results that signaled a sharp rebound in customer demand. 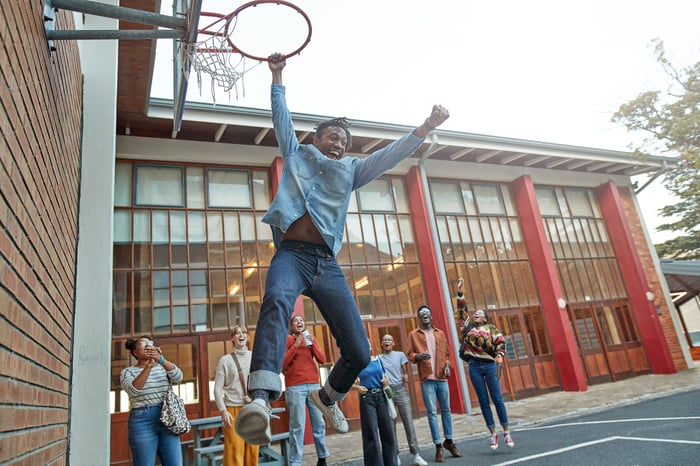 Levi Strauss reported revenue growth of 41% compared to the third quarter of 2020. Earnings jumped almost sevenfold to $0.47 per share, which was better than what most of those following the company behind the well-known Levi's brand had anticipated. Strength came from both of its distribution channels, as direct-to-consumer revenue rose 34% year over year and global wholesale revenue climbed an even steeper 45%.

Of course, 2020's numbers were affected by the COVID-19 pandemic, but even comparing results to pre-pandemic numbers from 2019, Levi Strauss did well. Overall sales climbed 3% from two years ago, with digital sales helping to spur the growth, jumping 76% over that longer period. Earnings per share were up by more than half compared to the third quarter of 2019.

The recovery has helped Levi Strauss pay down some of its debt, make a strategic acquisition of an activewear company, and authorize a stock buyback program. That's all good news for the company, and investors see it as a positive sign that retail in general is roaring back with a vengeance.

Meredith gets a buyer

Elsewhere, shares of Meredith were up more than 6% in pre-market trading. The magazine publisher rose after receiving an acquisition bid it found acceptable.

If that offer seems low compared to Meredith's share price, there are two reasons. First, Meredith is selling its television business segment to Gray Television for $2.83 billion, which should result in Meredith shareholders receiving just under $17 per share for their stock. Add those two cash figures, and investors are in line to get more than $59 per share in cash once both deals go through. Second, the stock had already climbed a couple of weeks ago on speculation of a buyout bid from IAC/InterActive.

Shareholders are happy to see an agreement coming together. Going forward, it'll be interesting to see how Dotdash does with Meredith's legacy publishing business, but it signals the willingness of new disruptors to use old-economy assets to their advantage.