Please ensure Javascript is enabled for purposes of website accessibility
Log In Help Join The Motley Fool
Free Article Join Over 1 Million Premium Members And Get More In-Depth Stock Guidance and Research
By Rich Smith – Oct 7, 2021 at 11:58AM

Shares of Rocket Lab USA (RKLB -1.25%) rocketed -- what else? -- in Thursday-morning trading, shooting up 6.5% through 11:30 a.m. EDT after the satellite launcher released a very big announcement concerning NASA.

Specifically, the U.S. National Aeronautics and Space Administration has chosen a Rocket Lab Electron rocket to carry NASA's new Advanced Composite Solar Sail System, or ACS3, to orbit. This is a "technology demonstration" mission, explains NASA, and the technology it will be demonstrating is how to use lightweight booms and a "solar sail" created from "composite materials" as the propulsion system on a small CubeSat satellite.

"Just as a sailboat is powered by wind in a sail, solar sails employ the pressure of sunlight for propulsion," says Rocket Lab, "eliminating the need for conventional rocket propellant." And "data obtained from the ACS3 demonstration will guide the design of future larger-scale composite solar sail systems that could be used for space weather early warning satellites, near-Earth asteroid reconnaissance missions, or communications relays for crewed exploration missions." 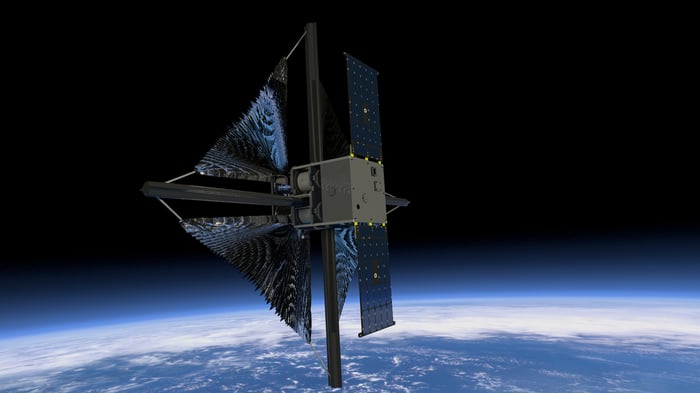 All of this is of course good news for space fans as NASA pushes the boundaries of space tech to find new ways to move about space cheaper and more efficiently. It's not clear how much this particular mission will move the needle for Rocket Lab, however.

No value was stated for the NASA launch contract. ACS3 is described as a "12U" CubeSat, implying that its mass probably won't be more than 12 times that of a 1U CubeSat -- so perhaps 36 pounds in total. That's barely 5% of the payload capacity of an Electron rocket, implying that NASA won't be paying more than $400,000 or so of the Electron rocket's $7.5 million launch cost.

Rocket Lab won't be getting any money to build ACS3, either. NanoAvionics of Columbia, Illinois, is doing that, in cooperation with NASA's Ames and Langley research centers and Santa Clara University's Robotics Systems Lab.

Still, from a PR perspective, this is a win for Rocket Lab, and that's why investors are bidding the stock up this morning.

Rocket Lab's No. 1 Most Important Number (for Investors)
351%