Please ensure Javascript is enabled for purposes of website accessibility
Log In Help Join The Motley Fool
Free Article Join Over 1 Million Premium Members And Get More In-Depth Stock Guidance and Research
By Neil Patel – Oct 10, 2021 at 6:03AM

Investors in this streaming giant should focus on the second half of 2021 and beyond.

Earnings season is about to be in full swing, and for Netflix (NFLX -0.07%), investors will be paying attention to subscriber numbers. The business added just 5.5 million customers in the first six months of 2021, after signing up a whopping 25.9 million members in the same period of 2020.

Netflix reports third-quarter financial results on October 19. Regardless of how Wall Street reacts to the streaming pioneer's numbers, the stock is a smart buy right now. 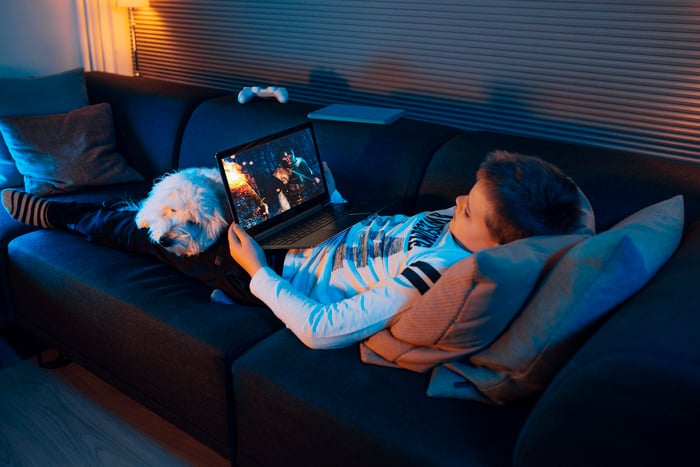 Unsurprisingly, with everyone spending more time than usual at home last year, Netflix added customers at an unusually high rate. However, as economies slowly continue reopening, it's only natural that with more leisure and entertainment options to choose from, people will watch less TV. Contributing to the unimpressive subscriber numbers so far this year was a light content slate, as Netflix was forced to shut production due to lockdown measures in various countries.

"As discussed in previous letters, COVID-related production delays in 2020 have led to a lighter first half of 2021 slate that will build through the course of the year," management mentioned in the second-quarter shareholder letter. "COVID and its variants make predicting the future hard, but with productions largely running smoothly so far, we're optimistic in our ability to deliver a strong second half slate," they continued.

For Q3, management expects Netflix to add 3.5 million subscribers, which would be 59% higher than the 2.2 million people that joined the service in Q3 2020. Wall Street's consensus forecasts initially called for 5.6 million new customers for the current quarter.

Although you might take a pessimistic stance on the stock based on these projections, I urge you to follow management's perspective of paying attention to the past 24 months as a whole.

CFO Spencer Neumann made this pretty clear on the earnings call: "So we'll have -- if we deliver on our guide, it means we'll have added 54 million new members over that 2-year period or on average, 27 million a year, which is right in line with our past few years of growth in 2018 and '19."

So if we zoom out and see the bigger picture, Netflix is doing just fine.

The ongoing pandemic is still a serious situation, and businesses, including Netflix, will experience choppiness as the world continues making progress against the health crisis. For investors, it's best to ignore the quarter-to-quarter fluctuations and keep your eyes on Netflix's trajectory and continued success. Management certainly is.

The number of subscribers Netflix adds in any given quarter is extremely important. And particularly in Q3, shareholders will get more clarity as to how beneficial a heavier content slate is to user growth. But for long-term investors, fixating too intensely on a three-month period is a flawed approach. What really matters is if the company's fundamentals are still intact, something that seems to be the case.

Netflix's scale gives it a huge advantage versus competitors because the business can spend massive amounts on content and spread these costs over 209 million (and counting) customers. Through the first six months of 2021, cash outlays for content totaled $8 billion.

Even more remarkable is the company's ability to consistently raise prices over time. Management has been very clear about asking members to pay more for the service, especially since so much money is invested in continuously improving it for users.

And with the U.S. and Canadian markets showing a slowdown in growth, Netflix is expecting international markets to drive customer additions in the years ahead. A majority of revenue (56%) in Q2 came from outside the U.S. and Canada. Furthermore, the ability to popularize major foreign hits like Lupin, Money Heist, and Squid Game only supports Netflix's global ambitions.

While quarterly financial results provide critical information for shareholders, what investors should really concentrate on is the long-term outlook for a company. In Netflix's case, the future still looks bright. Subscriber count will continue climbing, and the business benefits from several key advantages. The pricing power that comes from a fantastic content library is a unique ace up Netflix's sleeve.

The stock looks like a good buy ahead of the upcoming earnings report.