Please ensure Javascript is enabled for purposes of website accessibility
Log In Help Join The Motley Fool
Free Article
Join Nearly 1 Million Premium Members And Get More In-Depth Stock Guidance and Research
By Will Ebiefung – Oct 12, 2021 at 10:43AM

Zynga and CuriosityStream are small companies with the potential to soar.

Want to bet on a long-term growth story while it's still cheap? Look no further than Zynga (ZNGA) and CuriosityStream (CURI 0.75%). Both companies trade for around $10 or less while enjoying double-digit growth rates and catalysts for future expansion.

Let's explore the reasons why these stocks could boost your investment portfolio.

Zynga's stock price of $7.40 gives it a market cap of $8.2 billion -- making it significantly smaller than video game rivals Activision/Blizzard and Electronic Arts, trading for $59 billion and $39 billion, respectively. Zynga has been under pressure because of changes in Apple's privacy requirements, which could impact the social game developer's user acquisition. But the combination of a low valuation and rapid growth makes Zynga's dip look like a buying opportunity. 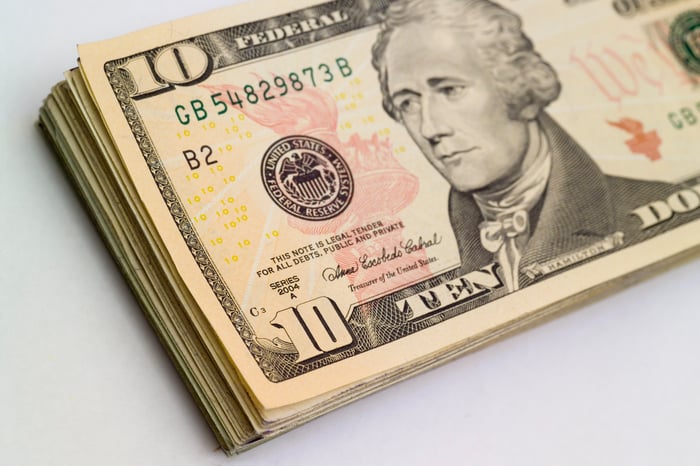 In Zynga's second-quarter earnings transcript, CEO Frank Gibeau highlighted Apple's privacy changes as a headwind. The App Store now forces app makers to ask permission before collecting identifiers used for tracking and targeting, which results in higher customer acquisition costs. The good news is that Zynga's $250 million acquisition of ad monetization firm Chartboost in May will alleviate some of these challenges.

Chartboost also features a demand-side platform, which helps advertisers place ads. And it uses machine learning to help with targeting -- reducing Zynga's reliance on data from the App Store.

Management expects revenue to grow 38% year over year to $2.73 billion, giving it a forward price-to-sales (P/S) multiple of just 2.9 with its market cap of $7.95 billion. For comparison, Activision/Blizzard and EA boast P/S multiples of 6.7 and 7.3, respectively. And while Zynga isn't profitable yet on a generally accepted accounting principles (GAAP) basis, it expects adjusted EBITDA to grow 116% year over year to $575 million (this calculation adds back stock-based compensation).

Trading for just over $10 per share, CuriosityStream has a market cap of just $555 million, which puts it in small-cap territory. The company operates a fast-growing subscription streaming platform focused on factual content. With a strong niche and plenty of expansion opportunities, it's only a matter of time before more investors pile in.

Video streaming and other stay-at-home industries are cooling down as the pandemic situation normalizes, but the long-term outlook still looks bright. Analysts at Grand View Research expect video streaming to expand at a  compound annual growth rate of 21% to $224 billion by 2028. And CuriosityStream's documentary focus also allows it to benefit from growth in global e-learning -- expected to be worth $458 million by 2026 (CAGR of 10.3%).

Management expects revenue to grow 80% year over year to at least $71 million in full-year 2021. And with a market cap of $536 million, that gives CuriosityStream a forward price-to-sales ratio of just 7.5. Not only is that valuation lower than Netflix's price-to-sales ratio of 10.5, buts it's a rare bargain for a company growing at such a rapid clip.

CuriosityStream plans to maintain its momentum by expanding the availability of its content. In August, it entered a multiyear distribution partnership with streaming TV platform FuboTV. The company is also expanding into synergistic opportunities in self-education through the May acquisition of One Day University, a platform that features lectures from professors at over 150 U.S. colleges and universities.

Looking past the bear market

The NASDAQ index has fallen by around 6% over the last 30 days --powered by a sell-off in America's big tech companies like Facebook and Apple. But despite bearish sentiment in the stock market, Zynga and CuriosityStream could still make good bets because their modest valuations and rapid growth rates could limit possible downside while giving investors the potential for long-term gains.