The people have spoken, and real meat is winning (for now) in reopening American restaurants.

Shares of plant-based meat maker Beyond Meat (BYND -0.14%) have slid to $102 per share, the lowest it's been since first breaking through the $100 barrier 16 months ago. The slump comes as competition stacks up and sales wind down with the end of COVID-19 lockdowns. As Americans turn to eating out rather than preparing food at home, new research indicates Beyond Meat's products are struggling. Potential investors might want to wait and see what happens before investing. Let's take a closer look.

Beyond Meat is losing traction as restaurants reopen

Sales of Beyond Meat's plant-based meat products appear to be under pressure from opposite directions. As the lifting of COVID restrictions in many places lets people get back to enjoying a dine-in experience at a restaurant, demand for at-home meal ingredients is waning. Not entirely, of course. Eating at home still remains a more frequent choice than before the pandemic. (August restaurant dining was 5% higher this year than the prior one though still 5% lower than in 2019.) 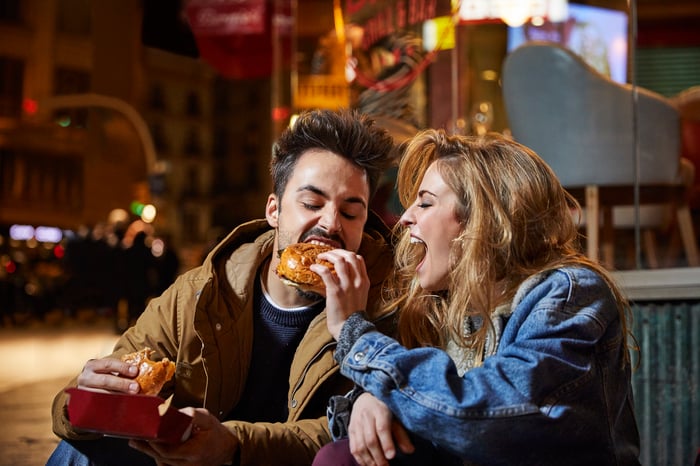 With consumers starting to switch back to dining out rather than eating at home, grocery store sales of Beyond Meat products will lessen in importance compared to foodservice sales. Already, the company reported a 14.3% drop in grocery sales for the second quarter, providing a concrete measure of the trend. Unfortunately for the company, there are signs that returning restaurant diners aren't ordering plant-based menu items with the eagerness that Beyond Meat and other alternative-protein manufacturers might have hoped.

Meanwhile, real beef consumption is on the upswing. Beef burger orders at restaurants increased 12% between June 2020 and June 2021 while orders for plant-based menu items have remained basically flat during that period, according to NPD Group (as reported by Bloomberg).

Multiple major restaurant brands have cut back on or failed to renew their plant-based food trials based on weak demand. To cite just one example, Carrols Restaurant Group (TAST 1.34%), a major franchisee of Restaurant Brands International's (QSR 0.23%) Burger King, reported an approximately 50% drop in Impossible Whopper sales between its August 2019 launch and late 2020.

At this point, it's impossible to tell if the pivot back to real-meat orders in the foodservice sector is a persistent trend or a temporary effect of reopening. But it is a useful reminder that projections by faux-meat makers of the eventual complete replacement of real meat with plant-based meat are still just estimates.

At the same time that restaurant sales have leveled off and real meat appears to be making a comeback, rising competition is becoming even more pressing for Beyond Meat. While the company seeks to differentiate itself by, for example, eschewing soy protein in most of its products, it may not be enough. Rivals are popping out of the woodwork. The company's most recent product release -- chicken nuggets made from fava bean protein -- is battling for market share against 50 other makers of faux chicken in the U.S. alone.

Beyond Meat may yet retain at least some first-mover advantage. However, its success has also encouraged new competition and expanded the market, making those competitors more likely to succeed. While many start-ups are small, some major players with deep pockets are also getting in on the faux meat game.

Hormel Foods (HRL 0.10%), for instance, just announced a partnership with The Better Meat Co. on Oct. 6. Their product, Rhiza, is made from fungal cultures. Hormel's press release notes that it "is an all-natural whole food mycoprotein with a remarkable meat-like texture." The release goes on to claim this faux meat has "more protein than eggs and more iron than beef."

While The Better Meat Co. would have found it difficult to challenge Beyond Meat's leading position in the fake meat market on its own, its new access to the funding, distribution network, and production capabilities of Hormel could make it a significant challenger in the near future. It is also unlikely to be the only one.

Is Beyond Meat the Tesla or the Pontiac Aztek of faux meats?

Back in early 2020, before the pandemic, I asked whether Beyond Meat would be "the Tesla of plant-based meat companies." Its trajectory over the following months appeared to support that possibility. But the comparison no longer holds true. Tesla (TSLA 0.08%) is still thriving in its sector while Beyond Meat's rocket-like growth appears to have fizzled, and it's falling back to Earth.

The setback could be temporary since a case can still be made for Beyond Meat's continued success. But given its ongoing decline over several months and the absence of significantly positive news, it may be best to stay cautiously neutral on Beyond Meat -- and perhaps fake meat companies in general. There are plenty of other food stocks to invest in while waiting to see if Beyond Meat can pull out of its recent slide and resume its headline-making growth.