The stock surged after obtaining FDA approval for avacopan.

Biotech stocks generating minimal revenue can make for very high-risk, high-reward investments. The approval of a key drug can instantly change a stock's fortunes. And that's what happened with drugmaker ChemoCentryx (CCXI) this month.

The U.S. Food and Drug Administration (FDA) granted approval for the company's autoimmune drug, avacopan, which instantly led to shares of ChemoCentryx more than doubling in value.

For investors who didn't want to take on the risk heading into the FDA decision, the obvious question now is whether it's too late to invest in the healthcare stock. After amassing such impressive returns over a short time frame, can investors who buy the stock today still expect to earn a good return on their investment? 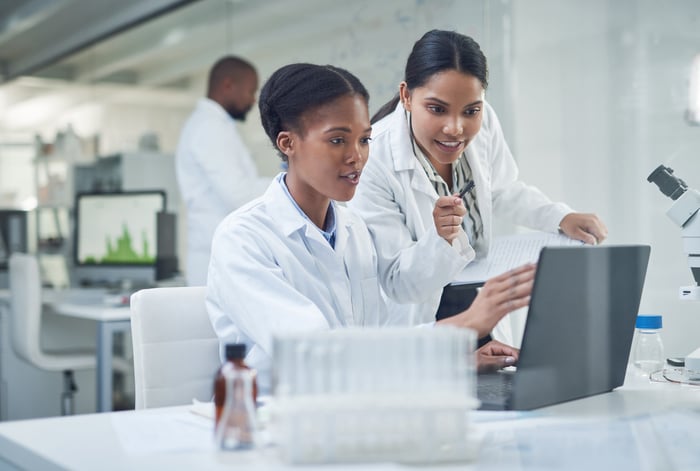 Why there could still be more upside left for the stock

The FDA approved avacopan (which will be sold under the name Tavneos) to treat patients with severe active anti-neutrophil cytoplasmic autoantibody-associated vasculitis, which is an autoimmune disease that inflames small blood vessels. It is monumental for ChemoCentryx, as it gives the company its first FDA-approved drug. And it could lead to significant revenue growth down the road.

Avacopan is a potential blockbuster drug that, at its peak, could generate close to $2 billion in annual revenue. Although it might take several years to get to that point, any jump in revenue could be significant for the business -- last quarter (for the period ending June 30), ChemoCentryx reported just $1.8 million in revenue.

ChemoCentryx is also looking at avacopan's use for other indications, including hidradenitis suppurativa, a painful skin condition where people develop lumps. When the company last released its earnings (on Aug. 9), it said it planned to meet with the FDA to discuss phase 3 trials for this indication. Next year, ChemoCentryx is also looking to start clinical development to test for the drug's effectiveness against lupus nephritis (inflammation of the kidneys as a result of lupus).

If the FDA approves avacopan for more indications, then that will certainly bolster the potential for the drug and how much revenue it can bring in for the company. For now, however, investors should rely on just what the FDA has approved thus far. Even on that, there could still be plenty of potential to earn a good return.

Analysts remain bullish, even at the current price

Upon hearing the news of the FDA approval, many analysts issued new price targets for ChemoCentryx's stock. And there's a broad range of estimates, with top bank JPMorgan Chase having the most bearish of expectations, setting a price target of just $38 -- which is right around where the stock is today. But that's the minority, as many see shares of the stock going even higher. Analysts from Raymond James and HC Wainwright believe the stock could top more than $100 within the next few years.

Should you invest in ChemoCentryx?

ChemoCentryx has lots of potential over the long term if it can build on the success of avacopan's recent approval. Now that it at least has one FDA-approved drug in its portfolio, the company can get to work on selling it.

And the good news for investors is that ChemoCentryx isn't bloated with expenses the way some biotech companies are. Last quarter, its net loss was $39 million. Even if it takes many years for avacopan to reach its full potential, it may not take nearly as long for the company to turn a profit -- assuming it can keep its costs under control. Expenses will inevitably rise as the business expands, but a path to profitability certainly seems to be there.

One of the reasons I'm optimistic about that is because the company does appear to be well-managed from a financial standpoint; with cash burn from its operations over the past 12 months totaling just $75 million, the company's cash and short-term investment balance of $313 million looks to be more than sufficient to keep the business going for the foreseeable future.

It's still a long road ahead for ChemoCentryx, but the business is a much safer buy today than it was last month. And while investors have missed out on some gains by waiting until now to make a decision, it doesn't look to be too late to buy the stock, especially if you're planning to hold onto it for the long haul.