Investors were unimpressed by the company's clinical and financial news.

Sarepta Therapeutics (SRPT -0.82%), a biotech company that specializes in genetic therapies for rare diseases, dropped 14.7% this week, according to data from S&P Global Market Intelligence. The stock opened at $96.18 on Monday, then plummeted sharply, falling as low as $83.01 on Wednesday, before rallying a bit on Thursday, only to fall back down later in the day.

There was plenty of news for the week, not all of it bad, but investors reacted skittishly to the developments. To start the week, the company announced results from its three phase 3 trials for SRP-9001 to treat Duchenne muscular dystrophy (DMD), which is caused by gene mutations that disrupt the dystrophin protein that is crucial for muscle functions. The trials, which measured the response of SRP-9001 on 120 juvenile patients, said that patients improved on the North Star Ambulatory Assessment (NSAA) scale compared with untreated patients. The NSAA measures functional motor skills in ambulatory children who have DMD. Apparently, investors did not think that was enough of a change for the therapy to make a big splash. 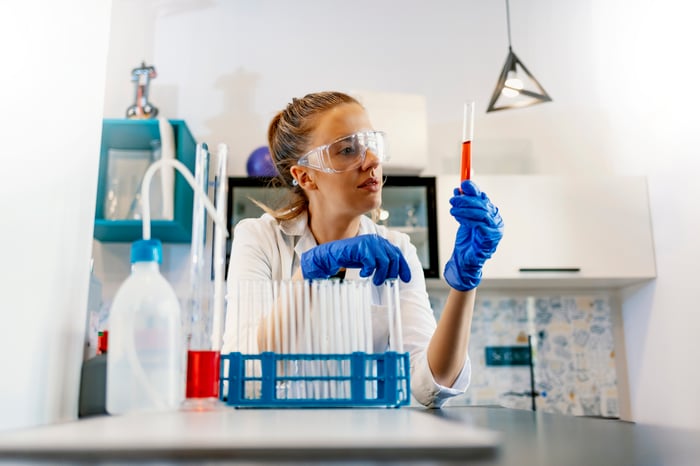 The second bit of news was the company's preliminary release of third-quarter financials, where it said it expected $1.69 million in revenue this quarter, up 37.5% year over year. It also said the biotech's cash position was down to $1.6 billion, compared with $1.9 billion in the same period a year ago. There were no other information, so the paucity of details may have been worrisome to investors. The lack of information was concerning, because in the first six months, the company reported that it had lost $319.4 million compared with a loss of $256.3 million in the prior year.

The last shoe to drop was the company announcing a $500 million offering of common stock, which will help it raise money but also waters down the value of current shares.

There's still plenty of potential for Sarepta Therapeutics in the long run. It has only three marketed therapies, all injectables to treat DMD, based on different gene mutations, but it has a growing pipeline of 42 therapies that include treating DMD, limb-girdle muscular dystrophy, and other rare neurological disorders.

If SRP-9001 can be found to be a best-in-class therapy to treat DMD, that would be a big deal because there aren't many alternatives on the market. A recent report by Persistence Market Research put the compound annual growth rate for the DMD treatment market at 48.3% between now and 2026, reaching a $9 billion market by that time.

Why Sarepta Therapeutics Stock Is Perking Up Today
363%