The returns haven't been half bad, to say the least.

CRISPR Therapeutics (CRSP -2.59%) is one of the most exciting biotechs on the market today, because it's pushing the limits of what is possible when it comes to treating hereditary diseases. It's all made possible by the company's gene-editing technology, which (as the name implies) is based on the much-hyped CRISPR-Cas9 system.

But does sophisticated tech make for a good investment, even when the business has no products for sale? To answer this question, let's take a look at how well this stock performed for shareholders over the last few years and get a feeling for whether it might be a good pick today. 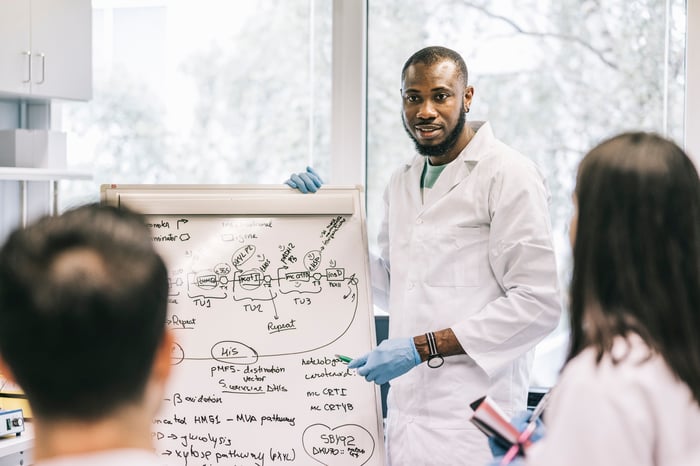 Early investors got a pretty penny for taking on the risk

Biotech stocks like CRISPR tend to be quite risky, especially if they don't have any mature drug products that are approved for sale. If a company's clinical trials fail to impress investors, its stock price will plummet, and there's no guarantee of recovery. On the other hand, a few hard-won successes in the clinic can send a biotech's stock to the moon, and that's generally the story of CRISPR Therapeutics. 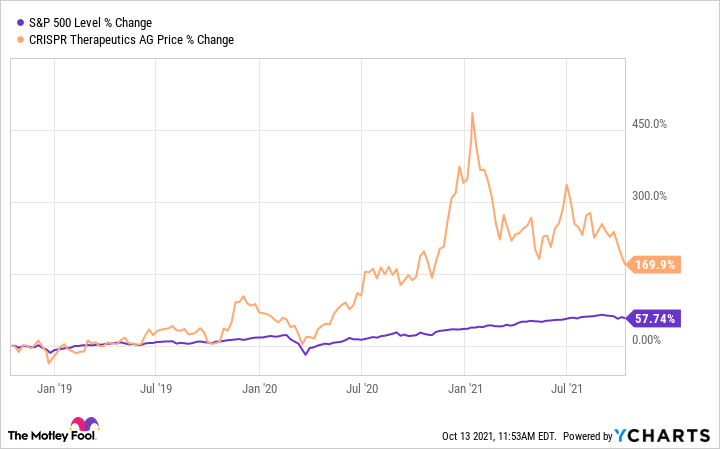 Your investment would have grown by almost 170%, reaching a total value of around $8,157 as of this writing. That return is not half bad, and there's likely plenty more growth to come as its projects in clinical trials inch closer to commercialization over the next few years.

But what was the company up to that might have motivated someone to make an investment in late 2018? The most important development at the time was probably when the U.S. Food and Drug Administration (FDA) gave the green light to initiate CRISPR's phase 1/2 clinical trials of CTX001, its sickle cell disease and beta thalassemia therapy being developed in collaboration with Vertex Pharmaceuticals. As the flagship program, it's not an exaggeration to say that CRISPR's success was in large part riding on CTX001, so the stock would have been ripe for speculators -- and it still is.

With good results in hand, the future looks bright

Today, development of CTX001 continues, and a lot of new information has given patients and investors reasons to be hopeful for the future.

Importantly, it appears as though CRISPR is succeeding in its aspiration to functionally cure beta thalassemia and sickle cell disease with a single infusion of CTX001. Per a clinical update in June of this year, 15 patients with beta thalassemia and seven patients with sickle cell disease were free of symptoms that would require medical interventions like blood transfusions, even many months after their treatment with CTX001. Thankfully, CTX001 appears to have a tolerable side effect profile, and no serious adverse events (SAEs) have been linked to its use.

CRISPR also has a trio of clinical-stage oncology programs in the works, each of which could provide returns for investors over the next few years as they progress through trials and then again from drug sales if they are approved by regulators. Because those programs are wholly owned, it can't expect infusions of cash from collaborators like Vertex to bring them through the clinical trials process. Still, with $2.59 billion in cash at the ready and only $266.95 million in research and development (R&D) expenses in 2020, it shouldn't have any problem with funding for the next few years.

Could people who invest now get a similar return?

Three years from now, it's entirely possible that CRISPR's stock will have repeated or even exceeded its returns since 2018. As its acumen with developing gene therapies is proven by its progress in its clinical trials, all of its projects will be viewed as being more plausible sources of future revenue. And it's sure to be introducing promising new programs and advancing them into early stage trials to keep the pipeline full.

Still, it'd be irresponsible if I didn't emphasize that this is still a risky stock. Clinical trials can start off strong and end with ambiguous or poor results, leaving investors with significant losses. Likewise, nobody has ever successfully done what CRISPR is trying to do with many of its projects, which makes the risk that much higher.

Nonetheless, I'm of the opinion that this stock could have a home in the speculative section of your diversified portfolio. If the company's preliminary results are to be believed, it could be one of the leaders in the age of gene-editing therapeutics, and by all indications, it's just getting started.