The worldwide pizza company is finally showing signs of a slowdown after surging since the pandemic onset.

Domino's Pizza (DPZ 0.19%), the largest pizza company globally, reported third-quarter results on Thursday, Oct. 14. It continues to grow revenue even as economies are reopening and folks can more freely choose other restaurants to visit.

However, this report ended Domino's long-standing streak of consecutive quarters with same-store sales growth in the U.S. Let's look closer at the company's Q3 figures and see why the streak's end is not as bad as it sounds. 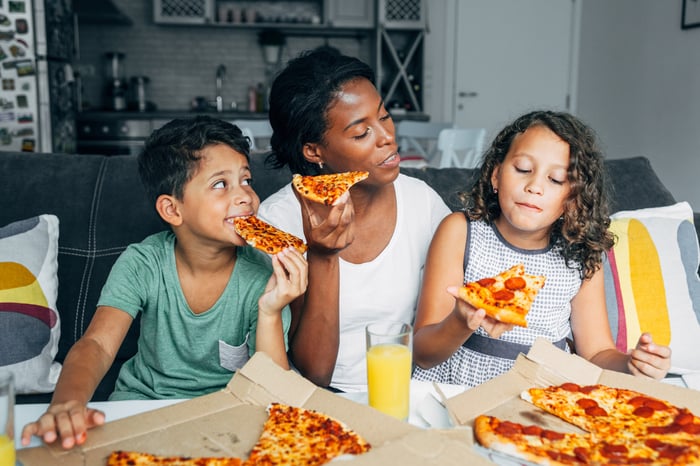 Domino's long-running streak of same-store sales growth went back to 2009. So it was a bit of a disappointment to see the streak end when the company reported a 1.9% year-over-year decrease in the metric in the third quarter. Still, it is not surprising given Domino's report was comparing with a robust growth rate in the previous year. Last year's third-quarter growth rate of 17.5% was the highest it has achieved in its history as a public company.

In addition to having a high bar to jump, Domino's end to the streak can be attributed to widely reported labor shortages. Remember, Domino's runs on a franchise business model, and its franchisees have lots of discretion on what they pay to attract staff. It seems, while some franchisees did increase incentives to attract workers, others decided to operate fewer hours or at reduced staffing levels.

Fortunately, Domino's sustained its longer-running streak (111 quarters) of same-store sales growth internationally by reporting an 8.8% increase in the metric from the year before. The segment includes countries like India, Japan, China, and others, each enduring unique phases of the coronavirus pandemic.

Interestingly, the international segment continued taking a more prominent role in the company overall. Domino's and its franchisees already had more stores open internationally than domestically, and the trend accelerated in the quarter. A net 278 Domino's opened internationally in Q3 versus just 45 domestically. That brought the total breakdown to 11,631 for the former and 6,426 for the latter.

Similar factors causing the decline in same-store sales growth in the U.S. also held back new store development. Management noted difficulty finding sufficient staffing for new stores as well as for construction and other supply constraints.

Domino's stock initially rose on the news but has fallen 4.5% since the release of Q3 earnings results Thursday morning. The market is not sure what to make of Domino's earnings results. On the one hand, the end of same-store sales growth in the U.S. was not positive. On the other, Domino's increased its profit margins across the board in a tough business environment. Rising costs for labor, materials, and freight are filtering up as the coronavirus pandemic disrupts all parts of the supply chain.

Despite those challenges, Domino's margins increased, which led to earnings per share increasing to $3.24, up by 30% from the same quarter last year and ahead of analyst estimates on Wall Street.

The company is trading at a price-to-earnings ratio of 34.6, near the ratio's higher end over the last 10 years. That being said, Domino's has increased its operating profit margin by nearly 1,000 basis points during that time, so the higher price could be justified.