Both have exceptional growth opportunities.

Invest in businesses that are shaping the future. It's usually a pretty good way to make money over the long run.

Nvidia (NVDA 2.84%) and Teladoc Health (TDOC 6.47%) stand out as two companies that are working to shape the future. Nvidia's chips are the gold standard in gaming and in powering artificial intelligence apps. Teladoc is the leader in virtual care.

Both stocks have been big winners over the last five years. So far in 2021, though, Nvidia's shares have soared while Teledoc's shares have sunk. Which of these two growth stocks is the better pick now? 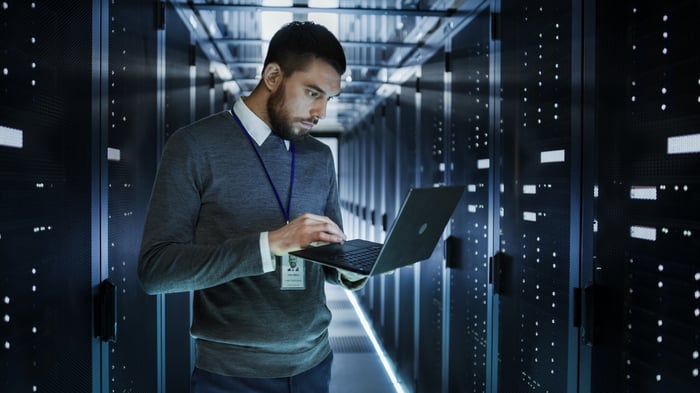 Gaming remains Nvidia's biggest moneymaker. Selling graphics processing units (GPUs) for gaming generated 47% of the company's total revenue in the second quarter. Nvidia should benefit as the popularity of gaming grows. It also has an especially attractive catalyst with the increased adoption of cloud-based gaming.

Nvidia also makes billions of dollars each year providing chips for data centers. Although this business isn't growing as fast as the gaming unit, the company's data center revenue soared 35% year over year in Q2.

There's one wild card that could accelerate data center revenue growth tremendously, though. Nvidia's planned acquisition of British semiconductor maker Arm Holdings remains held up in regulatory review. It's uncertain whether or not the deal will win the necessary approvals. If it does, Nvidia will boost its strength outside of gaming.

Another significant growth opportunity for Nvidia is in self-driving car technology. The company's DRIVE platform is poised to be a winner especially in powering the artificial intelligence behind autonomous robotaxis and trucks.

Perhaps the most intriguing new market for Nvidia is in professional visualization. The company's Omniverse is the first real-time 3D simulation and collaboration platform. Nvidia CEO Jensen Huang said in the company's Q2 conference call, "So I'm fairly sure that at this point Omniverse and the metaverse is going to be a new economy that is larger than our current economy."

Sure, Nvidia faces competition. However, the company is leading the way in multiple high-growth markets.

The COVID-19 pandemic poured fuel on the fire of an already expanding telehealth market. As the largest telehealth provider, Teladoc Health was a big beneficiary. But the adoption of telehealth won't end as COVID-19 concerns wane.

Teladoc's customer base includes more than 40% of the Fortune 500 plus many other smaller clients. The company has nearly as many potential users at current clients as it does active members. This gives Teladoc room to grow even without adding new customers.

However, the company also has plenty of opportunities to win new clients. For example, Teladoc's acquisition last year of Livongo Health opened the door to competing in the digital health market. Teladoc has also launched new products such as Primary360, a virtual care service for primary care.

Consulting firm McKinsey & Company projects that the virtual care market opportunity in the U.S. could reach $250 billion per year. Even though Teladoc is the largest virtual care company, it currently has a market share of less than 1%.

Other companies are also targeting this big virtual care market. Teladoc, though, offers an unmatched integrated model with a broader global presence than its rivals.

My view is that both Nvidia and Teladoc Health have exceptional growth potential. I own both stocks and don't plan on selling them anytime soon. If I had to pick just one of them, though, the nod would go to Teladoc.

The key differentiating factor, in my opinion, is size versus the potential market for each of these companies. Nvidia's market cap already tops $540 billion compared to only around $22 billion for Teladoc. I think that it will be easier for Teladoc's share price to deliver tremendous gains over the next decade than it will be for Nvidia to do so. Again, though, I fully expect both of these stocks to be big winners for investors.