If you're reading this, then odds are good you already know last year's average monthly Social Security payment was worth $1,559. What you may not realize, however, is that most retired beneficiaries aren't actually collecting that much. A few people are getting a little more, while a lot are getting much less. As such, if your retirement budget is loosely based on that $1,559 average, you might want to find out exactly how much you'll be banking from the government-run program when the time comes.

Mathematical averages are a great way of painting a picture with some broad brush strokes. The thing is, an average number can and often does obscure important details. In this case, that important detail is the fact that you're actually not likely to be collecting a Social Security check within $100 of the 2020 average payment of $1,559.

The graphic below puts things in perspective.

In $100 increments, the most common monthly benefit is between $1,700 and $1,800. Of the 46.3 million retirees currently collecting Social Security checks, nearly 2.7 million of them are banking monthly payments in that ballpark. The next most common payment is a step up from there; more than 2.5 million people are enjoying a monthly payment of between $1,800 and $1,900. Not bad. Another 5.1 million folks are then earning somewhere between $1,500 and $1,700 per month, very near the average.

Then something curious happens. A sizable swath of the country's 46.3 million Social Security recipients aren't to be found immediately above or below that mathematical mode. Rather, there's a pronounced pile of around 12 million people receiving monthly payments of between $800 and $1,300 apiece. Only about one-fifth of all Social Security retirement recipients are seeing checks ranging from $1,400 to $1,800. 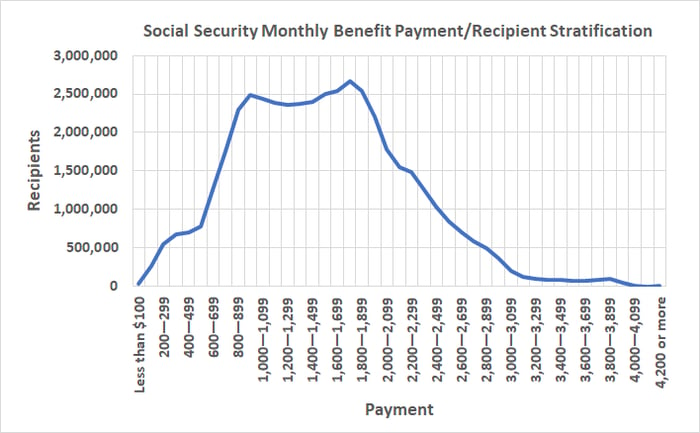 Here's another way of describing the concerning manner of Social Security distributions: Of the Social Security Administration's 46.3 million beneficiaries, 10.8 million of them are collecting less than $1,000 per month, while a little less than 11.1 million of them are enjoying monthly payments of at least $2,000. To twist a common statistician's term, there's not a lot that's "normal" about this normal distribution.

That's good and bad news for investors. A handful of lucky people will make meaningfully more than the average. On the other hand, Social Security checks are apt to end up being shockingly modest for a great number of retirees.

In case you're wondering, (while it still doesn't replace a personalized estimate provided to you by the Social Security Administration), the average monthly payment of $1,559 reflects an average monthly income of a little over $4,000 in today's dollars. Earning around $5,000 per month will get you closer to $1,800 in retirement benefits, assuming you retire around the age of 65. Retirees collecting $1,000 in monthly benefits today consistently earned a salary of around $2,500 per month, in today's dollars.

Are you panicked you're going to be on the wrong side of the way Social Security payments are divvied up among contributors? Don't be, especially if you've got years to go before you can even start to think about collecting.

It's not an idea that's discussed very often simply because it requires some complicated number crunching. But the return on your required "investment" in Social Security isn't a particularly great one. Estimates vary from one source to the next, but all of them suggest you're only earning/growing your contribution at a low-single-digit pace. That return is even lower after factoring in inflation. A small monthly investment in the stock market, however, can ultimately build a retirement nest egg capable of topping your monthly Social Security benefit. 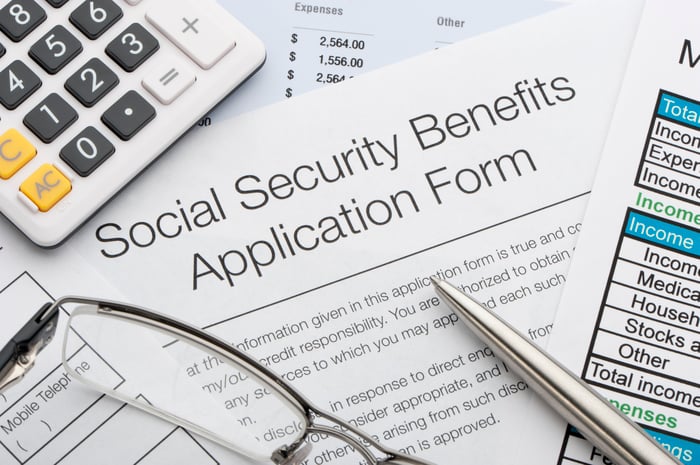 Take for example a hypothetical investor named Pat. At 25 years of age Pat can only scrape together an extra $3,000 per year to put toward retirement. But if Pat can earn the average annual market return of 9% per year for 40 years and retire at the age of 65, that money will grow to $1 million. A few good dividend stocks bought with that money will generate more income than Pat's monthly Social Security payment.

Another investor, Terry, is in a slightly different position. Terry got a slow start career-wise due to grad school, earning very little until turning 35 years old this year. But Terry's education led to a $60,000 a year job, allowing Terry to tuck away $5,000 every year in the stock market even after paying back student loans. If Terry can keep putting that amount to work in the market until age 65, it should produce a nest egg worth roughly $700,000. Terry won't be able to generate as much investment income as Pat will, but Terry's higher income should mean larger Social Security monthly benefits as well.

Planning is the key

These are only back-of-the-envelope calculations, of course. That doesn't change the bigger point, though. That is, averages are a great place to start making a financial plan, but not necessarily a great way to complete such a plan. Details matter, and the sooner you start paying attention to them, the better.

Regardless, the best retirement income strategy is not needing to rely on Social Security income at all and to grow your own retirement nest egg. The best way to do that is by starting early, even if you're starting small.

Note that the Social Security Administration can give you a personalized estimate of your monthly future benefit based on your lifetime earnings to date. It's a service called my Social Security, and looking at it would be time well spent.