Capital One Financial is up big in 2021, but it remains a good value.

Capital One Financial (COF -3.13%) investors have had a terrific year. At Monday's prices, the stock was up more than 70% in 2021, which is beating both the S&P 500 and the average return in the financial sector. It has bounced back nicely from the worst of the pandemic, based on an uptick in the economy, among other factors.

But even now, the stock still has a relatively low valuation, which means it could still have room to run. With third-quarter earnings coming up at the end of October, now may be a time to consider taking advantage of Capital One's nice price, before another strong quarter potentially boosts it even higher. 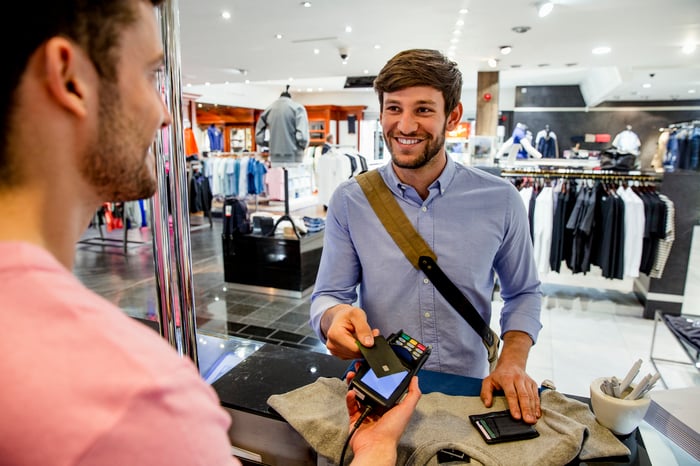 You probably know Capital One from its ubiquitous commercials as one of the largest credit card issuers in the country. As an issuer, it lends the money for credit card purchases and makes revenue on interest paid on the loans as well as swipe fees. It is the fifth-largest credit card issuer, with a market share of roughly 10%. It's also a bank, offering traditional banking services for individuals and businesses, but most of its revenue -- around 61% -- comes from credit cards.

In the second quarter, credit card revenue increased about 6% year over year to $4.5 billion, while overall revenue jumped 12% to $7.4 billion.  This was due to a 47% increase in purchase volume to $132.7 billion as more people were out spending compared to a year ago. The net charge-off rate was also down, from 4.5% a year ago to 2.3% -- which means credit quality improved as fewer people were defaulting on their debts. Net income jumped to $3.5 billion, up from $3.3 billion in the first quarter and a $917 million net loss a year ago -- which was an anomaly because of a huge $4.2 billion provision of credit losses set aside in Q2 2020. But for a historical perspective, over the last 10 years, Capital One has grown revenue about 8% per year.

Third-quarter earnings will be released on Oct. 26 and, as my colleague Bram Berkowitz pointed out in a recent article, loan balances were trending up and credit quality continued to improve in August, so that could bode well for continued momentum.

A tech company that does banking

Capital One founder and CEO Richard Fairbank sees the company's embrace of technology as a key differentiator in terms of its efficiency and growth. "Our modern technology is powering our current performance and setting us up to capitalize on the accelerating digital revolution in banking," Fairbank said back in July on the second-quarter earnings call.

The investments, which the company has made steadily over the past nine years, have improved both the customer experience and operational efficiencies. Fairbank said the goal is to "build a technology company that does banking, essentially what Capital One is. The technology and data are increasingly what the business is."

"So meanwhile, we continue to focus on operating efficiency. Our tech transformation is the engine of long-term efficiency gains, both through revenue growth and digital productivity gains," Fairbank said on the call. "And delivering positive operating leverage over time continues to be one of the important payoffs of our technology journey and a key element of how we deliver long-term shareholder value."

While Capital One's net income has had its ups and downs over the past 10 years, these investments and efficiency improvements have started to pay off, in the years just prior to the pandemic, and should net more consistent results in the years ahead.

While the credit card business is Capital One's bread and butter, it made an acquisition on Oct. 14, buying TripleTree, a firm that specializes in mergers and acquisitions and investment banking in the healthcare sector. This could be a catalyst to help boost Capital One's small but growing commercial banking business.

I think the company is in a very good position to grow. It has exhibited loan growth in a still choppy economic environment, and its efficiency improvements should help turn that into consistent earnings growth. The company has reported increasingly higher margins -- as it currently has an operating margin of 51.7% and a return on equity of 19.6%, both excellent numbers.

Plus, the company comes out of the recession with great financials, including a common equity tier 1 (CET1) ratio of 14.5%, twice the required minimum, and a high liquidity coverage ratio of 141%.

Capital One's valuation is extremely low: It has a price-to-book (P/B) ratio of 1.3, a price-to-earnings (P/E) ratio of just 6.7, and a ratio of price to earnings growth (PEG) of 0.54, which is a sign the market is discounting its earnings potential. While the P/B ratio is slightly higher than it has historically been over the past decade, it's still pretty low in absolute terms, and lower than those of its competitors.

It might be a good time to consider this rock-solid stock, which has built a hugely recognizable brand and seems well-positioned to deliver long-term returns.