The catalyst that sent the coffee chain stock higher were reports that Dutch Bros may be outperforming its biggest competitors.

Data intelligence platform Placer.ai analyzed customer visits to Dutch Bros and compared it to traffic at both Starbucks (NASDAQ:SBUX) and privately held Dunkin' Brands. In an interview with Yahoo! Finance, Placer.ai's vice president of marketing, Ethan Chernofsky, said Dutch Bros was growing much more quickly and the company had an opportunity to become a real competitor to its more established rivals. 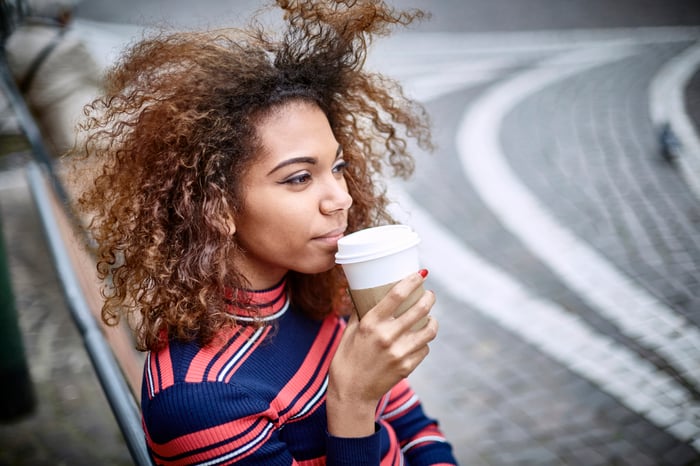 An underlying report from Placer.ai provides more context. For the month of September, visits to Dutch Bros locations soared 113.8% compared to the report's base period of October 2019. At the same time, visits to Dunkin' rose 11.9%, while visits to Starbucks declined 1.8%. The results were similar to August, as Dutch Bros customer visits surged 106.5%, while visits at Dunkin' were up 17.8% and visits at Starbucks were flat.

That isn't an isolated incident, either, according to Chernofsky. Compared to the October 2019 base period, visits to Dutch Bros were up by more than 100% every month between March and September 2021, as the reopening gained ground. During the same period, Dunkin' visits were up 7.4%, on average, while Starbucks visits dipped 4.5%.

It's important to note that Dutch Bros' results are from a much smaller base, but it does provide directional insight into the company's growth. Dutch Bros only has roughly 500 stores compared to more than 15,000 for Starbucks, according to Chernofsky, which points to the magnitude of its opportunity.

The report also points out that the number of visits per location at Dutch Bros "has increased dramatically in the past two years," which points to a high degree of customer loyalty.

Dutch Bros just went public last month, so it's still early days for the coffee chain, but if it can maintain its current trajectory and customer trends, Chernofsky said it could eventually become "a real threat to the established coffee leaders."