Analysts love this recent IPO, and there may be good cause for an upbeat assessment.

After launching with an approximate $3 billion valuation, coffee chain Dutch Bros (BROS 0.15%) continues flexing its market cap muscles. Unlike many IPOs, whose share price spikes briefly and then slumps in profit-taking, Dutch Bros' market capitalization has grown more than threefold since its debut at $23 a share on Sept. 15.

The momentum seems to be causing a feedback loop of new investment, while Wall Street analysts are giving the newly public company a slew of bullish ratings. The stock performance so far may partially be froth and excitement over a new public player in the sector, but there's at least one major reason for a solid bull case on Dutch Bros stock. 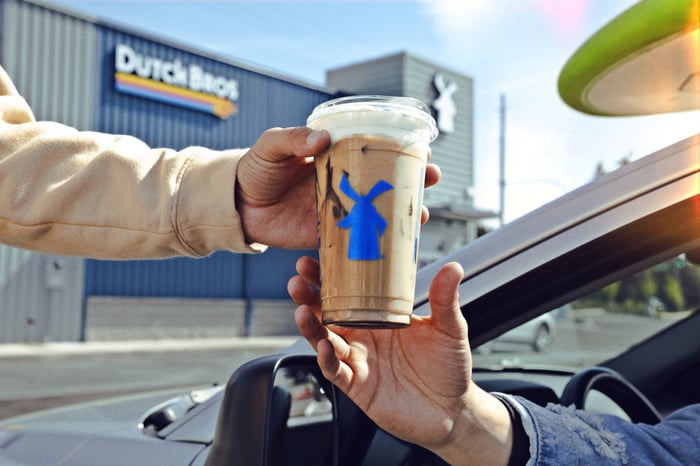 Good press is certainly helping the coffee enterprise climb to fresh heights this month. The "quiet period" -- or 40 days following an IPO during which the newly public company cannot make promotional statements, issue guidance, or make performance predictions about itself -- recently expired, and an explosion of new analyst coverage followed.

Out of all the analysts initiating Dutch Bros coverage on Oct. 12, only one, Barclays, gave the company an equal weight rating, equivalent to a neutral or hold. The rest rated it buy, overweight, or outperform, or gave it similarly positive ratings. The highest price targets given were $60, which at the time was an approximate 43% upside. Several of the most bullish analysts gave no price target at all. The stock price jumped 15% the same day and passed the $50 mark the following day.

Several notable analyst comments include those by Stifel's Chris O'Cull, who remarked the company manages to "check all the boxes for a compelling restaurant growth investment," before predicting 30% revenue growth over three years and describing Dutch Bros' guidance for 4,000 restaurants as potentially conservative. Sharon Zackfia, an analyst at William Blair, was even more bullish, auguring an eventual 20-fold increase in revenue and pointing out the company's 72% under-35 customer base as a vital growth advantage.

Multiple upbeat analyst ratings naturally drove plenty of investment activity and made Dutch Bros' stock soar. However, the gains may have become self-perpetuating for some time as well, with the price rise driving FOMO, or fear of missing out, investments. By Oct. 19, a week after analyst coverage began, Dutch Bros' market cap topped $10 billion, with 163.2 million shares outstanding according to company representatives and a share price above $62. While volatility made its market cap sink to $9.9 billion, this put it at double the valuation of meme stock Wendy's at $4.93 billion, a similar amount above pizza chain Papa Johns International at $4.54 billion, and well ahead of boutique burger chain Shake Shack at $3.19 billion, among a slew of other well-known restaurant names. This success in itself may have been enough to fuel more purchases of the stock beyond that triggered by the market analysts.

The solid bedrock under potential success

While enthusiasm is running high following the launch of so much positive coverage at the same time, there are several key factors making Dutch Bros look like a probably genuine bullish investment. The company is solidly established with 14 years of same-store sales increases prior to going public to prove its operational bona fides. It offers a popular, welcoming drive-thru experience and sells both its own distinctive coffee and cold energy drinks, giving it an additional way of offering a pick-me-up to customers. Customer loyalty, indicated by membership numbers, is high.

All of this feeds into the primary reason why Dutch Bros is arguably a very good investment choice. Competitors such as Starbucks, strong and flourishing as they are, are mature companies with more limited room for expansion. While there are always new worldwide markets and "fortressing," or increasing the number of outlets in already developed market territories, they simply don't have the proportionate upside potential Dutch Bros does.

With around 470 locations, compared with Starbucks' roughly 34,000 outlets, Dutch Bros has a long runway of expansion ahead of it. Its retail footprint covers just 11 states as of June 30, clustering mostly on the West Coast and the Southwest. Expansion eastward looks like a likely next step, along with increasing market penetration in high-population states like California and Texas. A tenfold increase of restaurants to around 4,500, ahead of the company's own forecast of 4,000 outlets, is likely feasible in the medium term. If its business model continues proving successful, expansion well beyond that number appears likely in the long term, with a corresponding boost to value.

The one risk to investors is the question of how much of Dutch Bros' future performance is already priced into its stock value. Its high valuation compared with Wendy's, Papa Johns, Shake Shack, and various other restaurant chains, mentioned above, makes it look attractive and successful at the moment but could also cut into its future upside potential. However, this caveat is likely outweighed by future investor interest driven by the far-flung expansion of its outlets, and this remains an excellent pick among restaurant stocks today.