Can Arrival differentiate itself in the crowded electric vehicle space?

After Tesla's success, enthusiastic investors are looking for the next big thing in electric vehicles. Obviously, that could be difficult. However, investors willing to set reasonable expectations for their investments could find some hidden gems in this hyped-up space. One promising electric vehicle start-up is Arrival (ARVL -5.00%). Several factors make this stock interesting. Let's discuss the top three reasons to buy Arrival stock, and one reason to avoid it.

The first thing that makes Arrival attractive is its cost-competitive manufacturing. A couple of innovative ideas will help Arrival achieve this. To begin with, Arrival's vehicle bodies are not made of steel. Instead, the company uses a composite material that uses polypropylene (which is used in making plastics) and glass fiber. This not only makes the vehicle lightweight, but also eliminates the need for a paint shop in the factory. The manufacturing process also avoids stamping and welding. 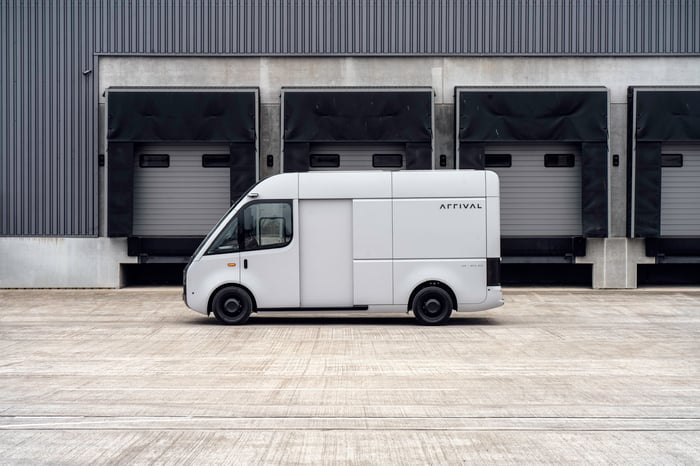 As the production process is streamlined, Arrival does not require big factory setups. It is establishing "microfactories" which can be set up with a much lower capital investment. For perspective, Arrival estimates that a typical microfactory with a capacity that's one-tenth of a traditional factory would require 20 times less capital to set up than the traditional factory. The microfactories can be set up swiftly and would require lower operating expenditures, too. Moreover, the company can scale up capacity quickly by setting up as many such factories as needed. Microfactories also allow the company to procure materials locally and tailor vehicles for local requirements.

Such lower production costs give Arrival the confidence of being able to offer electric vans and buses that can compete with internal combustion engine vehicles on the cost front. Arrival expects to start commercial production of its buses in the second quarter of 2022, followed by vans in the third quarter of 2022.

The second reason to like Arrival is its partnerships with some key automakers and potential customers. Arrival has formed a strategic partnership with Hyundai Motor (HYMTF 1.35%) that allows it access to Hyundai's engineering expertise and supply chain. Hyundai has also invested 100 million euros in Arrival. The partners have plans for joint development of vehicles on Arrival's platform.

Arrival has also partnered with logistics operator United Parcel Service (UPS 1.58%). Under the agreement, UPS has agreed to purchase 10,000 vans from Arrival between 2021 to 2025, with an option to purchase an additional 10,000 vans, resulting in a total revenue of $1.2 billion for Arrival. With a total fleet size of 120,000 vehicles, UPS makes over 5 billion deliveries per year. UPS aims for one-fourth of its annual vehicle purchases to be alternative fuel vehicles. Arrival has also entered into an agreement with LG Chem for battery supply.

But, even if they're delayed a bit, the company's growth plans look impressive overall. It has received non-binding orders and letters of intent for 59,000 vehicles. Arrival believes that its low-cost production will allow it to generate positive gross profit even at low volumes.

One reason to avoid Arrival stock

All the above doesn't mean that Arrival stock comes without risks. How Arrival's vehicles will perform in real-world conditions and whether customers will like them or not remains to be seen. Arrival has yet to prove that its vehicles can carve a niche for themselves in the highly competitive EV market. The company faces competition not only from traditional automakers, but also from other EV start-ups. If Arrival fails to deliver what it is promising, its stock price could be negatively impacted.

Despite risks, Arrival has something different and unique to offer. There look to be more pluses than minuses here. Overall, it looks like an intriguing opportunity among the EV start-ups right now.

Why EV Maker Arrival Soared as Much as 74% Today