These three facts can help you determine whether you want in on this fast-growing company.

With the stock reaching prices near its all-time lows, investors are eyeing this company as one to buy today. However, this discount in the share price does not mean it is a buy now; there are a lot of things this company has to do right for many years for it to become a less risky stock. Here are three things smart investors know before investing in this innovative company. 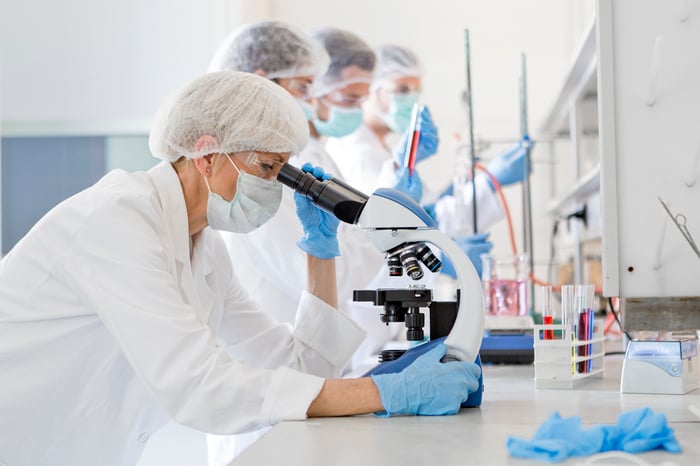 1. The company is very early in its journey

The most important thing investors should keep in mind about DermTech is that it is a very young company. DermTech has grown sales at a fast rate in 2021, but this is primarily because of the low comparable quarters in 2020. The company grew its assay revenue (revenue from testing) by 349% in Q2 2021 compared to Q2 2020, when its revenue was only $2.9 million for the quarter. Just two and a half years ago, the company only sold 2,300 tests while having just seven sales representatives.

DermTech's gross margin just recently reached positive territory as well -- reaching 11% in Q2 2021 compared to negative 118% in Q2 2020 -- typically an indicator that the company is extremely young. Its income statement shows this too: The company lost $17 million in Q2, representing 550% of the total revenue it brought in during the same period. Its free cash flow so far in 2021 was negative $24.5 million. The company is nowhere near profitability, and until its product sees greater adoption, it will likely stay that way.

2. A superior product does not always guarantee success

For the company to see broad adoption of its product, it cannot rest on the fact that the product is more accurate than traditional testing methods. While the company's pigmented lesion assay (PLA) test reduces the chance of missing melanoma from 17% to 1% and increases accuracy from between 65% and 84% to between 91% and 95%, this alone does not mean that doctors will broadly adopt it.

DermTech has to combine its superior product with successful commercialization. This means that it needs to convince doctors to switch to it and achieve broad market adoption, which necessitates a large and strong sales team. The company has made strides toward expanding its sales team, increasing from seven sales reps at the start of 2019 to 42 today, but the company wants to nearly double this number so that it can cover the entire U.S.

These sales reps also have to convince doctors to switch, and one thing that makes it easier for doctors and patients to buy into new products is insurance coverage. Currently, DermTech's PLA is covered by both Medicare Part B and Advantage, but the company has little penetration among commercial insurance carriers. For uninsured Americans or Americans whose insurance does not cover the PLA test, it could cost nearly $760, so it is critical that DermTech's product receives broad insurance coverage for it to gain adoption.

3. The company is priced for perfection

For such little penetration and a small revenue base, the company is valued extremely high. The company trades at 81 times sales, which is even higher than the valuation of Intuitive Surgical (ISRG -2.24%), a successful medical device company, at its IPO in 2000, when it traded at just 8 times sales. The valuation will likely go down as the company continues to grow at a fast rate, but even after that immense growth, DermTech will likely be priced for near-perfect execution into the future.

If the company can obtain broad market adoption of its product and change skin cancer testing, there is potential for multibagger returns for shareholders. This potential, however, does not come without extreme risk. Savvy investors will monitor DermTech's insurance coverage, sales team growth, and margin improvements, weighing the pros and cons before investing in this disruptor.