Which of these NAND chipmakers is a better overall investment?

Back in February, I compared Micron (MU) and Western Digital (WDC), two of the world's leading manufacturers of memory chips and data storage devices. At the time, I declared that Micron's clearer path toward a long-term recovery made it a better investment.

However, Micron's stock price has declined more than 25% since I made that call. Western Digital fared slightly better with a price decline of nearly 20%.

Did I overestimate Micron's ability to outperform the market as the global chip shortage intensified? Let's take a fresh look at Micron and WD to see if either out-of-favor tech stock is still worth buying today. 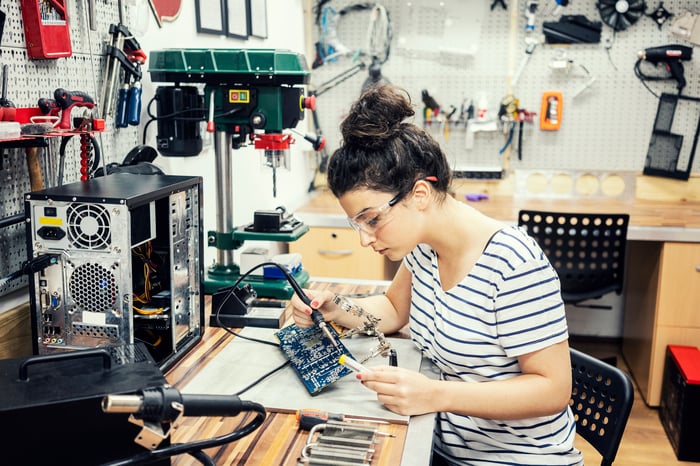 The differences between Micron and WD

Western Digital is the world's second-largest manufacturer of platter-based hard disk drives (HDDs) after Seagate (STX). It once generated most of its revenue from HDDs, but it became a major player in the NAND market after its acquisition of SanDisk in 2016.

WD's takeover of SanDisk enabled it to sell NAND chips and develop new NAND-based solid-state drives (SSDs), which are smaller, faster, and less prone to damage than traditional HDDs. WD has also been in talks to merge with Kioxia -- which would make it the world's second-largest NAND chipmaker after Samsung -- over the past year.

WD generated 51% of its revenue from its NAND (flash memory) business in fiscal 2021, which ended in July, and the remaining 49% from HDDs. However, merging with Kioxia would significantly boost its NAND revenue while reducing the overall weight of its legacy HDD business.

Micron's revenue rose 29% to $27.71 billion in fiscal 2021, compared to an 8% decline in fiscal 2020, as its adjusted EPS surged 114%. That growth was driven by higher sales of PCs throughout the pandemic, the production of new gaming consoles and mobile devices, and the expansion of data centers to cope with the soaring usage of cloud-based services. All of those catalysts reversed the memory market's price declines throughout 2019 and 2020.

Analysts expect Micron's revenue and adjusted earnings to rise 15% and 46%, respectively, this year. However, major research firms -- including Gartner and Trendforce -- expect DRAM and NAND prices to start declining again next year. Micron also expects the global chip shortage to directly impact its business by throttling its supplies of certain IC components, and to indirectly impact its sales by disrupting shipments of PCs.

Western Digital's revenue rose 1% to $16.9 billion in fiscal 2021, compared to its 1% growth in fiscal 2020, but its adjusted EPS jumped 50% as it reduced its operating expenses throughout the pandemic.

WD also suffered a slowdown as NAND prices peaked and it sold fewer HDDs, but analysts expect its revenue and adjusted earnings to increase 21% and 122%, respectively, this year as the market heats up again.

WD expects to benefit from many of the same secular tailwinds as Micron, but the projected decline in NAND prices next year could also curb its growth. It's also been ceding the HDD market to Seagate -- which overtook WD as the market leader last year -- and its planned merger with Kioxia remains unresolved as Kioxia mulls an IPO instead of merging with WD.

Both of these stocks look fairly cheap right now. Micron trades at seven times forward earnings, while WD has an even lower forward P/E ratio of six.

But if I had to pick one of these stocks right now, I'd still choose Micron again for three simple reasons: Its business is less complicated, it isn't burdened with a slow-growth legacy business like WD's HDD division, and it isn't pursuing a messy deal like WD's proposed merger with Kioxia.