JPMorgan Chase was led by strong M&A activity, and its balance sheet has it positioned well for what could come in the next few quarters.

Earnings season has kicked off, with JPMorgan Chase (JPM 0.60%) being one of the first major companies to report earnings this month. Investors eagerly await JPMorgan Chase's earnings because it's the largest bank in the United States, which can give us good insights into how consumers and the broader economy are doing.

During the quarter, JPMorgan beat analysts' estimates on revenue by 2% and on earnings per share (EPS) by nearly 25%. While the bank beat on estimates, much of its profit growth for the quarter could be attributed to improving economic conditions as well as strong mergers and acquisitions (M&A) activity. With that being said, the bank saw modest growth, and discussed how its strong balance sheet could position it well if inflation sticks around for a while longer. 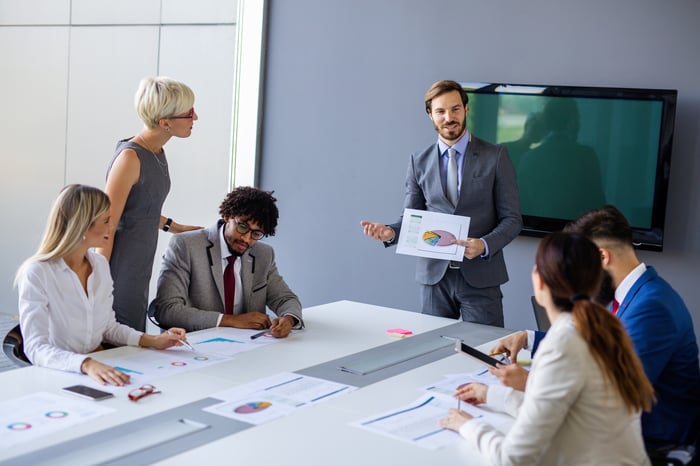 Investment banking saw an all-time record for mergers and acquisitions activity, which is a continuation of the trend we have seen so far this year. Advisory revenue was at a record level for the bank, which saw fees triple from last year, outpacing M&A activity which doubled. The biggest driver of growth was equity underwriting fees, which increased 41% as the IPO market remains hot.

The biggest boost for the bank was improving economic conditions that allowed it to release reserves built up amid the uncertainty brought on by the pandemic. During the quarter, its provision for credit losses provided a benefit to the income statement of $1.5 billion. As a result, net income for the bank increased 24% from the same quarter last year, to $11.7 billion.

Zooming out to the first nine months of the year, JPMorgan Chase's revenue of $92.4 billion is up 2% from the same period last year, while net income is up 124% to $37.9 billion. As in the third quarter, the bank benefited from releasing reserves. Last year, its provision for credit losses caused a $19.3 million hit to the bottom line. This year, it has seen an $8 billion benefit to the bottom line.

Looking toward the fourth quarter and 2022

Going into the fourth quarter, CFO Jeremy Barnum expects strong activity in M&A, which will drive year-over-year growth but is expected to go down from the third quarter. Overall, the bank continues to project a 2021 outlook in line with previous guidance, with net interest income of $52.5 billion expected. One positive development has been its card net charge-off rate, which it projects to come in at around 2%, its lowest in recent history.

During its earnings call, CEO Jamie Dimon announced that JPMorgan Chase is the first bank with branches across the lower 48 states. He went on to say that the bank is halfway through opening 400 branches by the end of 2022, with 30% of those branches opening in low- to moderate-income areas.

Dimon had this to say about inflation

One thing that is on many investors' minds is inflation, which Dimon addressed during the bank's conference call. On the call, Dimon noted that inflation has been over 4% for a few quarters now, and that it will likely stay elevated for the next two quarters at least. Dimon admitted he didn't know what would happen next with inflation, and that high inflation and high interest rates that follow should concern banks. That's because banks can benefit from gradually rising interest rates, but if rates rise too quickly it can create issues with loan growth, as consumers may avoid borrowing at elevated interest rates.

Barnum discussed how net interest income was a loss of $1.1 billion, largely because the bank has waited to deploy capital despite strong deposit growth. The upside to this is that JPMorgan has capital to deploy in the event inflation, and the interest rates that follow, rise significantly.