The company delivered another solid quarter and saw more high-powered growth ahead.

NextEra Energy Partners (NEP 1.95%) has delivered supercharged dividend growth since its initial public offering in 2014. The clean energy infrastructure company has increased its payout by 15% over the past year after giving investors another raise in the third quarter. As a result, it has now grown its dividend by 265% overall. That steady growth has pushed its yield up to 3.3%, well above the S&P 500's roughly 1.3% average.

The company sees more dividend growth ahead, which was one of the central themes of its third-quarter report. 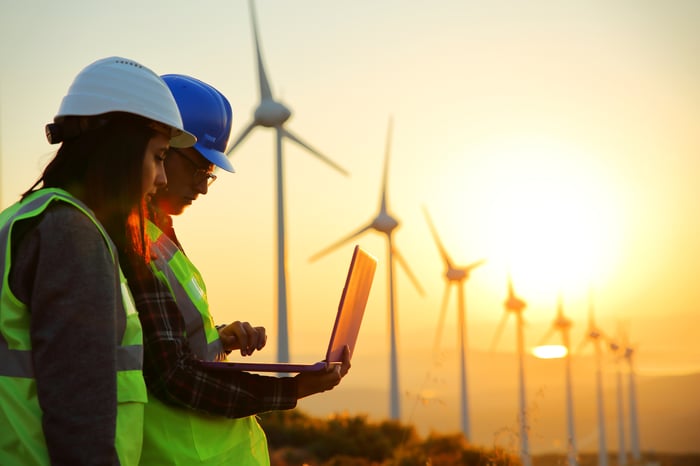 NextEra Energy Partners generated $334 million of adjusted earnings before interest, taxes, depreciation, and amortization (EBITDA) in the third quarter, up 7.1% year over year. New investments added $23 million to its bottom line during the quarter, while improved performance on existing assets added an incremental $7 million in EBITDA. Meanwhile, higher fees paid to its sponsor, utility NextEra Energy, and other items partially offset those two growth drivers.

However, the company's cash available for distribution (CAFD) declined in the quarter, falling from $162 million to $158 million. That was primarily due to the impact of its 2020 convertible equity portfolio financing.

That funding transaction reduced the earnings of its existing assets by $20 million, partially offset by a $13 million improvement in its interest costs. That financing gave the company the financial flexibility to acquire 500 megawatts (MW) of accretive renewable energy projects.

NextEra also made excellent progress on its strategic growth plan in the quarter. The company closed two acquisitions during the quarter and unveiled a new purchase. It acquired nearly 400 MW of wind assets from Brookfield Renewable for $733 million and closed the purchase of a net 590 MW of wind and solar assets from NextEra Energy for $563 million.

Finally, the company agreed to acquire roughly 100 MW of wind assets in California from a third-party seller after the quarter closed. It will pay about $280 million for the assets, which includes the assumption of about $150 million in debt. NextEra Energy Partners expects to recapitalize these assets when it closes the transaction next year as part of its 2022 funding plan.

Thanks to its solid showing in the third quarter, NextEra Energy Partners has now grown its adjusted EBITDA by 9% year over year, while CAFD is up 6%, compared to the same period of 2020. That has allowed it to increase its dividend by 15% year over year while maintaining a comfortable dividend-payout ratio of roughly 75%.

The company has also had an excellent year strategically. Overall, it has closed more than 1 gigawatt of acquisitions and has another deal in the pipeline. It's demonstrated that it can acquire assets from its sponsor, NextEra Energy, and third-party sellers. The company has also continued to secure attractive financing to fund its growth.

That supports the company's plan to continue growing its dividend at an industry-leading rate. It still expects to increase its dividend at a 12% to 15% annual rate through at least 2024. Meanwhile, it anticipates delivering that rapid growth while maintaining a comfortable dividend payout ratio in the low-80% range next year.

A great stock for income and growth

NextEra Energy continues to deliver above-average dividend growth, powered by the energy transition to cleaner sources. It made excellent progress on its growth strategy in the third quarter, closing two needle-moving deals and securing another one.

Because of that, it already has the power it needs to deliver on its dividend-growth objective through next year. That makes it an excellent investment opportunity for those seeking a rapidly rising income stream powered by clean energy.