A favorable mention on CNBC lit a fire underneath the biotech's stock this week.

Shares of the genetic-testing company 23andMe (ME -0.40%) gained another 16% through Thursday's close this week, according to data from S&P Global Market Intelligence. The biotech's stock is now up by more than 34% over the past two weeks.

23andMe's shares have been ripping higher ever since EMJ Capital founder Eric Jackson identified the biotech as a top pick during an interview on CNBC on Oct. 15. While Jackson appeared bullish on the company's well-established health and ancestry-data business, he singled out 23andMe's fledgling therapeutics platform as perhaps the biggest reason to buy shares. 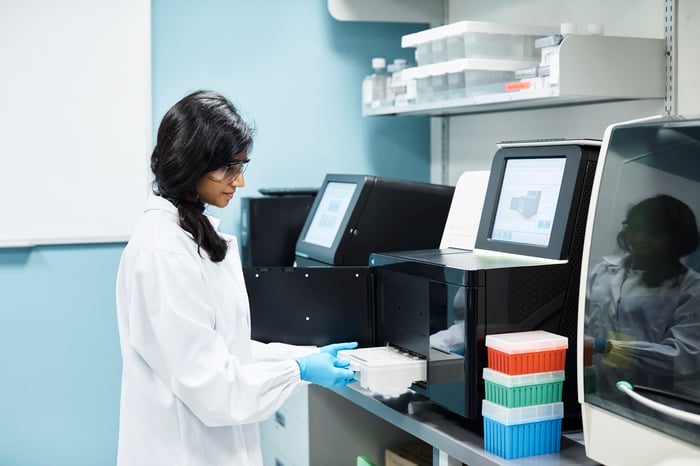 With over 11.6 million genotyped customers, 23andMe has one of the largest databases of genetic information in the world. The company in turn believes that its massive database could be used to develop novel treatments for scores of genetically based diseases.

Keeping with this theme, 23andMe has already built the foundations for a therapeutic pipeline aimed at treating over 40 high-value indications, including various cancers, cardiovascular and metabolic diseases, respiratory ailments, and neurological disorders, among many others. Most of these therapeutics programs, however, are still in the pre-clinical stage. The one exception is the company's GlaxoSmithKline-partnered immuno-oncology program, which has reportedly progressed to early-stage human trials.

Is 23andMe's stock still worth buying after this prolonged bull run? I think the answer is a resounding yes. The biotech's top-notch genetic library will probably attract a deep-pocketed big pharma soon enough. 23andMe's first-in-class genetic database, after all, could play a key role in the development of truly personalized medicines for a laundry list of hard-to-treat diseases.

Why 23andMe Stock Was Lagging the Market Today
415%