The answer in one word? Chips.

Auto industry supplier Gentex (GNTX -2.77%) reported that its net income fell by 34.5% year over year in the third quarter to $76.7 million ($0.32 per share) as its automaker customers were forced to cut production amid an ongoing global shortage of semiconductors. Revenue fell by 15.8% to $399.6 million.

Those results fell short of Wall Street's expectations. Among analysts polled by Thomson Reuters, the average estimate called for income of $0.37 per share on revenue of $434.57 million.

Another victim of the chip shortage

Gentex is the world's leading supplier of automotive rear-view mirrors that do anything more than simply reflect light. If your car's mirror automatically dims, has any sort of information display embedded in it, or has switches on it that control other functions in your vehicle, it was almost certainly made by Gentex. It's a niche business, but it's a good one: The company counts nearly all of the world's automakers as clients. 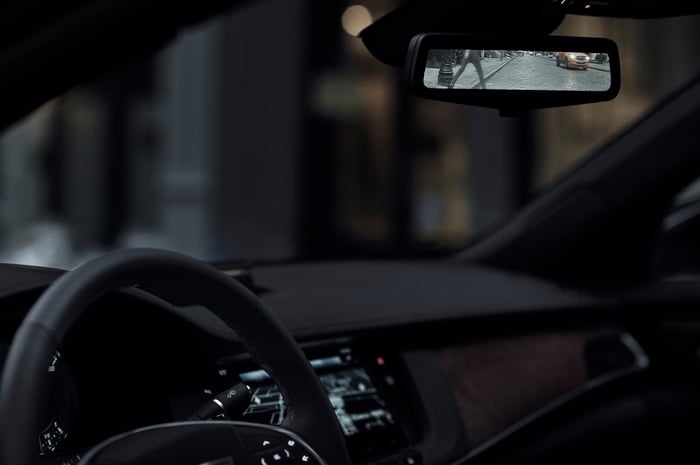 Gentex dominates the market for premium automotive rear-view mirrors, including auto-dimming mirrors, mirrors with displays, and camera mirrors, such as the one shown here in a Cadillac. Image source: General Motors.

For obvious reasons, Gentex's sales rise and fall in sync with global auto production. And while demand for new vehicles has been fairly strong in the world's largest auto markets (China, the U.S., and Europe), supplies have been severely constrained in recent months by the shortage of automotive-grade semiconductors. To make matters worse for Gentex, its own output has been limited to some extent by the chip shortage.

That's the backdrop to Gentex's third-quarter report. As its automaker clients were forced to reduce production, it was too. Shipments of the company's signature products -- automatically dimming rear-view mirrors -- were down 7% year over year. Total sales to automakers fell from $464.7 million in the prior-year period to $391.3 million.

The automotive industry accounts for most of Gentex's revenue, but it also maintains relatively small businesses in dimmable aircraft windows and in fire-protection products. Those didn't do well either: Combined sales in those areas fell to $8.3 million last quarter from $10 million in the prior-year period.

What Gentex's CEO had to say

CEO Steve Downing got right to the point during the earnings call.

"While we have been dealing with the impacts of supply chain constraints throughout the first half of 2021, the effects of the electronic component shortages worsened during the third quarter of this year," Downing said. "The hardest-hit regions were North America and Europe, where we typically have content that is above the corporate average in terms of average sell price."

As bad as it was, Downing said it could have been much worse. Gentex's engineers were able to redesign some of the company's circuits on the fly to better work with the varieties of chips that it and its automaker clients have been able to secure.

Gentex expects production of light vehicles in its key markets (North America, Europe, Japan, Korea, and China) to fall by about 20% in Q4 versus Q4 2020. Accordingly, it said that investors should expect its sales in the second half of 2021 will land in the range of $770 million to $840 million -- down from its previous guidance range of $970 million to $1.07 billion -- with a gross margin of between 35% and 36%.

This Dominant Manufacturer Could Offer Shelter in a Market Storm

How to Invest in Car Stocks