Amazon surprises Walmart by offering to aid affiliated retailers' efforts to give their customers a buy online, pickup in-store option.

It's hardly an existential threat to the world's biggest brick-and-mortar retailer, but it's certainly a move that should give Walmart (WMT -0.09%) shareholders reason to pay attention. Last week, Amazon (AMZN 2.10%) unveiled a new buy online, pickup in-store (or BOPIS) option for third-party retailers using Amazon as a sales platform.

The initiative undermines a key strategic advantage that has allowed Walmart to make inroads against Amazon: offering curbside or in-store pickup of online orders at more than 5,000 U.S. Walmart locations. The growth of this service brought a bunch of new customers for Walmart during the pandemic, and many of them have stuck with the service even though the shopping environment has moved back toward normal in the meantime. 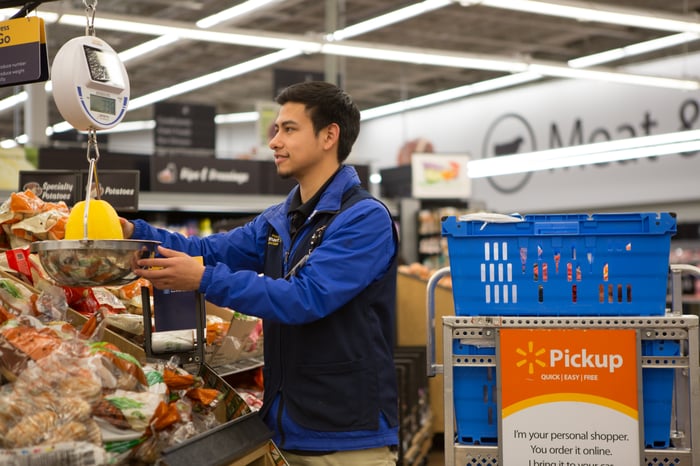 Walmart doesn't offer detailed accounting of this service, but it did disclose that last year's e-commerce revenue was up 69% year over year, extending several years of similar growth for its online shopping arm.

The bulk of that growth was a result of the pandemic, with shoppers largely stuck at home with few other options that didn't involve contact with potential virus carriers. Walmart's sheer size made it the new go-to online shopping option for many consumers. In May of last year, the company made it just as easy to shop online for non-grocery goods as for groceries, allowing pick up of those items at a nearby store with the same ease.

Now Amazon is responding. Last week, the company introduced Amazon Local Selling, giving third-party sellers that also run retail stores a means of arranging a local pickup of a purchase rather than routing that item all the way through Amazon's logistics network.

It's a relatively modest initiative for now. Only 16 merchants are participating in the program, and most of them aren't nationally recognized brand names. The most notable seller among the ones using the option is Best Buy, although it also offers curbside pickup of online orders using its own e-commerce platform, which sells goods at the same prices available on Amazon.

Still, to see Amazon even experimenting with a means of connecting small, localized retailers with consumers is a concern. The Walmart machine is designed to operate at a large scale and simply overpower small, localized third-party stores (although Walmart.com is open to selected third-party sellers). Amazon has a technology and service that Walmart could struggle to replicate.

Such an offer could also lure new sellers into Amazon's marketplace that may have been wary of such a relationship. Or perhaps it could attract even smaller sellers that Walmart has rejected as a third-party user of its e-commerce platform.

Amazon's foray into this unlikely arena also comes at a tough time for Walmart, which has made a series of big investments just within the past few months that suggest management didn't anticipate such a response from Amazon.

Early this year, Walmart earmarked roughly $14 billion to invest in its own supply chain and automation meant to ease the growth of its online selling. In August, it launched a home-grown delivery service called GoLocal not just to ferry its own online orders from its stores to consumers' homes, but also to deliver competitors' parcels as well. In June the company made a major investment in DroneUp, serving as a toehold in a nascent effort to make aerial deliveries of goods ordered online (an operation that inherently requires proximity to stores or fulfillment centers).

These and other initiatives were expected to continue putting Walmart in a better position to compete with Amazon with a true (and impressive) omnichannel operation. Now, Amazon is equipping third-party sellers with a way to compete with what's likely their biggest geographical competitor.

Again, it's not going to be a devastating blow to Walmart. It might not even be a blow at all if Amazon's local pickup initiative isn't expanded in a big way. But it is something that current and prospective Walmart investors should put on their radars, especially given how much growth online shopping and at-store pickup could and should mean to the company.

Market research outfit eMarketer projects BOPIS-related sales revenue in the United States will grow another 15.2% this year following last year's 107% surge stemming from pandemic demand, and then grow at an even faster clip every year through 2024.

At that point, BOPIS in the U.S. should reach an annual tally of $141 billion, up from 2020's total of a little more than $74 billion. Walmart's dominating presence positions it to capture the lion's share of that growth. It's still positioned to do so, but not nearly as convincingly as it might have been were Amazon not thinking locally as well.