The FDA's decision to allow mix-and-match boosters shakes up the COVID-19 vaccine market.

Last week, the U.S. Food and Drug Administration (FDA) authorized the use of "mix-and-match" COVID-19 vaccine boosters. Any person eligible to receive a booster won't have to stick with the same vaccine used in their primary vaccination.

This FDA decision opens the door to even more of a contest between the three COVID-19 vaccines currently available in the U.S. That's especially the case between the two most widely adopted vaccines. But here's why Pfizer (PFE -0.27%) and BioNTech (BNTX 0.78%) will likely be bigger winners than Moderna (MRNA -0.85%) with mix-and-match boosters. 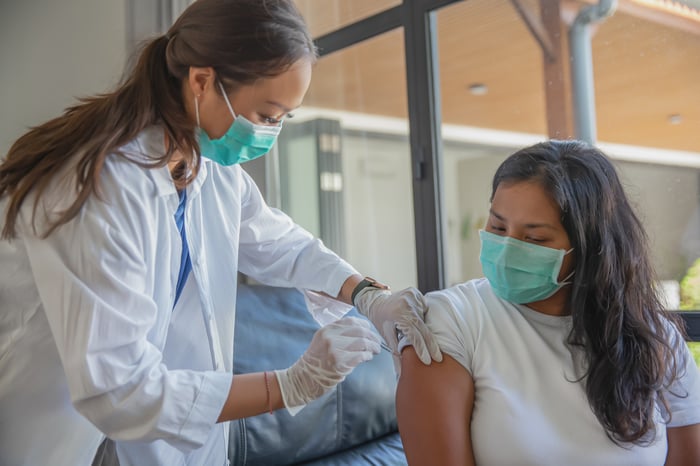 Only a week ago, I wrote that Johnson & Johnson (JNJ -0.35%) seemed likely to be the biggest winner with boosters. My reasoning was that an FDA advisory committee recommended that anyone who received the first J&J shot should be eligible to get a booster shot. That same committee, though, recommended restrictions on eligibility for the Moderna booster that were in line with what is already in place with the Pfizer-BioNTech vaccine.

Not everyone who initially received the Pfizer-BioNTech or Moderna vaccines is eligible for boosters. The FDA limited its Emergency Use Authorization (EUA) for boosters of these vaccines to people ages 65 and older, people between ages 18 and 64 who are at high risk for developing severe COVID-19, and people between ages 18 and 64 who work in settings that could put them at high risk of severe COVID-19 complications.

It made sense that Johnson & Johnson stood to be the biggest beneficiary from boosters, since its vaccine didn't have those restrictions. However, my conclusion was drawn before the FDA itself decided to authorize mix-and-match boosters. That decision changes the dynamics significantly.

Now, anyone who initially received the J&J shot could choose to receive either the Pfizer-BioNTech or Moderna booster. Any advantage that Johnson & Johnson might have had has fallen by the wayside.

So which vaccine does have an advantage with mix-and-match boosters? I think the answer is clearly Pfizer-BioNTech.

First, more people in the U.S. have received the Pfizer-BioNTech vaccine than the other two vaccines. That puts Pfizer and BioNTech in the driver's seat, assuming that most people will choose to receive the booster of the same vaccine type as their initial vaccination.

Third, several Nordic countries have suspended the administration of Moderna's vaccine to younger age groups because of safety concerns. Although the U.S. hasn't taken similar actions, the story has been heavily covered on this side of the Atlantic. This could prompt some who initially received the Moderna vaccine to choose the Pfizer-BioNTech booster.

A nominal victory over the short term

While I think that Pfizer and BioNTech will be the biggest winners with mix-and-match boosters, that victory will probably only be a nominal one over the short term. Don't look for the vaccine stocks to enjoy a big bounce from boosters.

The U.S. has already ordered 500 million doses of the Pfizer-BioNTech vaccine to give to Americans. That number doesn't include many more doses ordered to donate to other countries. Additional doses shouldn't be required to meet the demand for boosters even if a significant number of those who initially received the J&J or Moderna vaccines switch to the Pfizer-BioNTech booster.

Over the long term, the dynamics of the COVID-19 vaccine market are likely to change even more. Pfizer and BioNTech should continue to enjoy a leading position in the market. However, it's way too soon to predict that the companies will automatically be the biggest winners.